I was in such a hurry to catch the sunset, last night, that I blasted through Carpinteria. So this morning, I took a little time to look around, before hitting the road.

In 1769, a Spanish military expedition came through the area, where Carpinteria now sits, and some of the military men noticed Chumash Indians carving out wooden canoes. They named the town the Spanish word for Carpenter’s Shop, and the name stuck. Now, it’s a cute little beach town, with the usual shops and eateries, and, thankfully, a big grocery store for me to pick up a few supplies in. 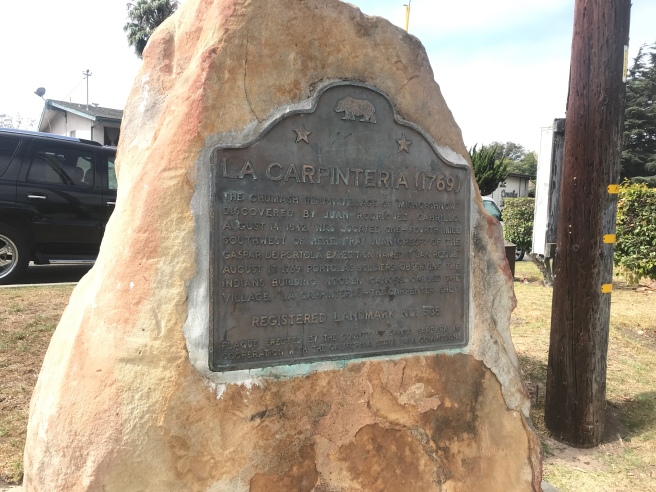 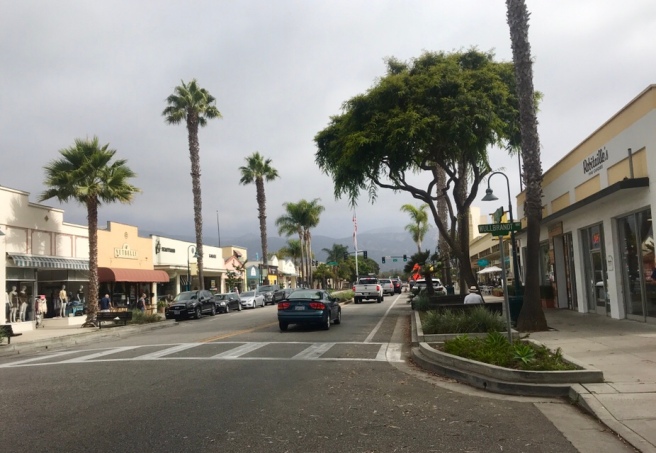 Places to charge your devices are few and far between, when you’re camping. Today, the route was so straightforward, that all I needed were my Garmin, rear lights, and phone camera. Most of the day, I sat up, like I was cruising on a city bike, and just followed the beach. No need for navigation.

The left side of the road had its own beauty, with eroding cliffs that, at times, looked like hoodoos were starting to form. 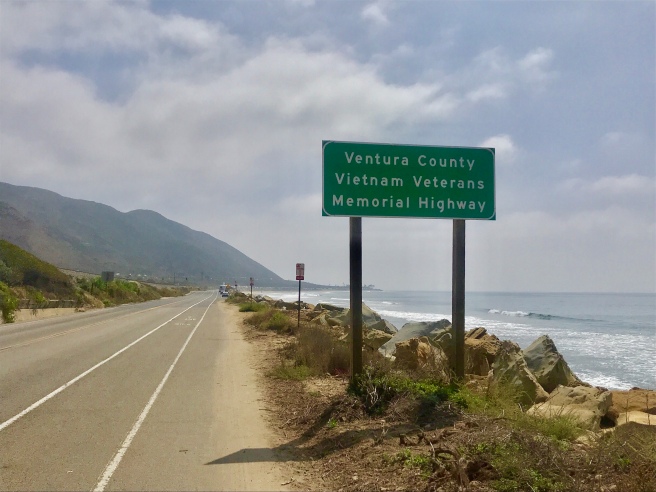 Riding through Ventura County, I passed through ‘The Rincon Parkway–what seems like a mile-long section of road that is lined off along the beach for parallel parking of RVs. They set up and camp for days at a time–right next to the ocean. Okay, biking is great, but I want one of those RVs for chilaxing, which is what all those RVers were doing. I think I need some of that balance in my life. Watching the ocean; reading, napping and eating out by the ocean; swimming and boogie boarding in the ocean; and walking along the beach are all bike free activities that were calling out to me. 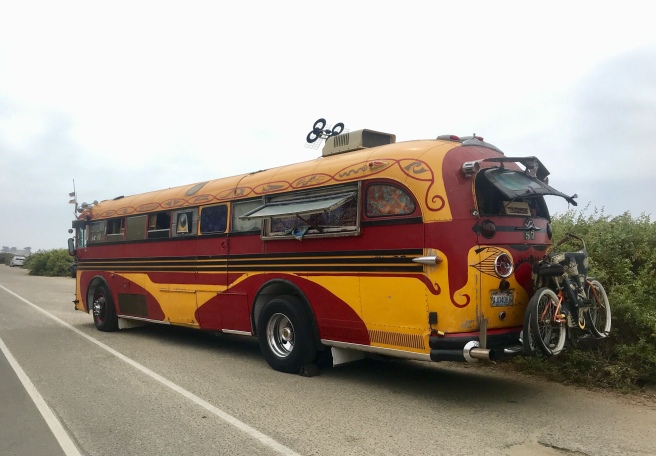 Passing through the cities of Ventura and Oxnard, life looks like it revolves around the beach and ocean. In Oxnard, there were a gazillion yachts, and houses built along little inlets, where you can dock your yacht behind your house. Pretty exclusive stuff. 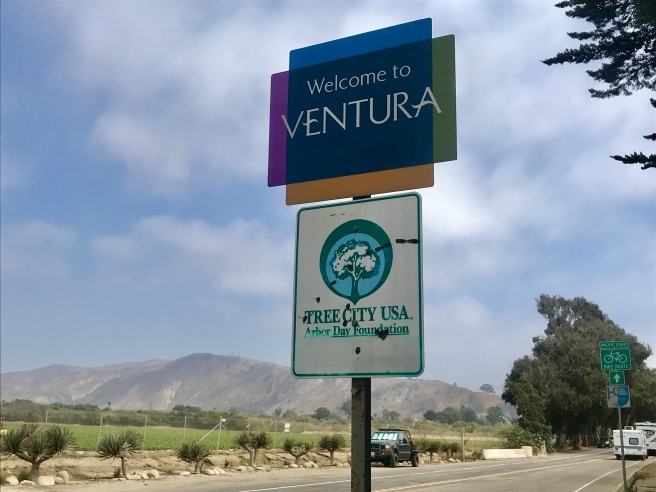 When I reached Port Hueneme, it was time to forage for food, and there just happened to be a Denny’s for my moment of need. The next thing I came to was Naval Base Ventura County, the home of the Seabees.

When I was deployed to Fort Bliss, we loved it when a Seabee unit was deploying, because they could crank out construction projects like nothing you’ve ever seen. They had the skills to quickly move walls, add doors, and repair and remodel old barracks, so we could better accommodate the increasing numbers of Servicemen who were doing their pre deployment training down range.

I had to choose between going to the Seabee Museum and shopping at the Commissary and NEX (Navy Exchange), and it was a tough decision. Surprise, surprise, the NEX won out. It stocks Brighton jewelry and some Clinique products I am running out of at home, and I’m close enough to the end of the ride that I don’t mind carrying the extra weight.

Buzzed from blowing some money on a few luxury items, I hit the road again, and for a short period of time, I was inland–riding through fertile farmland. Being botanically challenged, I don’t know my crops, but apparently, some of them were veggies that get canned or frozen by Dole. 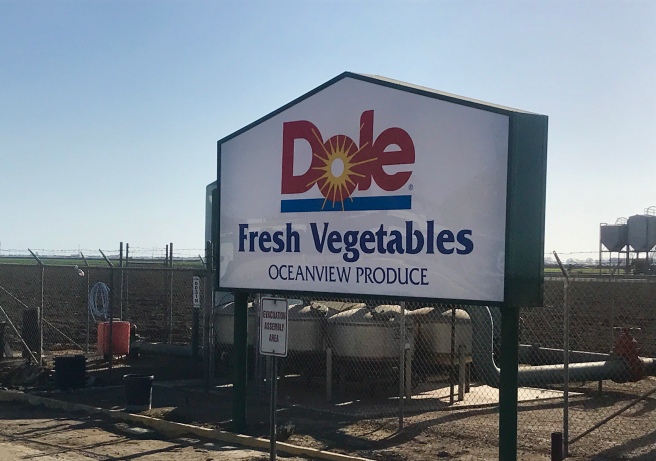 As I passed by Point Magu, another Navy facility, I stumbled upon this cool missile museum. There were static displays of a couple of missile launching aircraft and a bunch of missiles, some of which are still in service today. 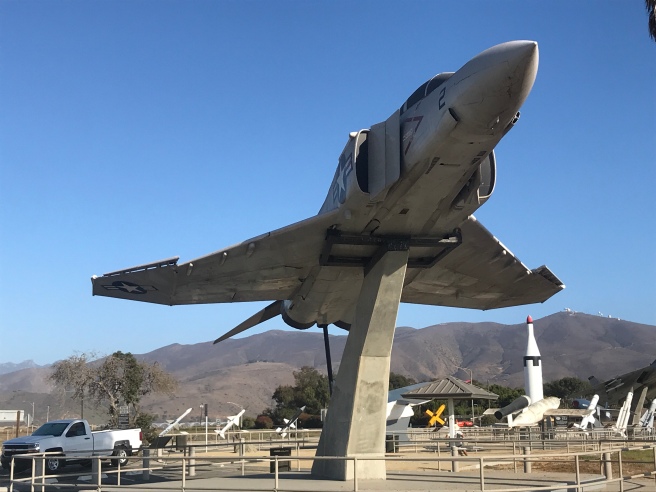 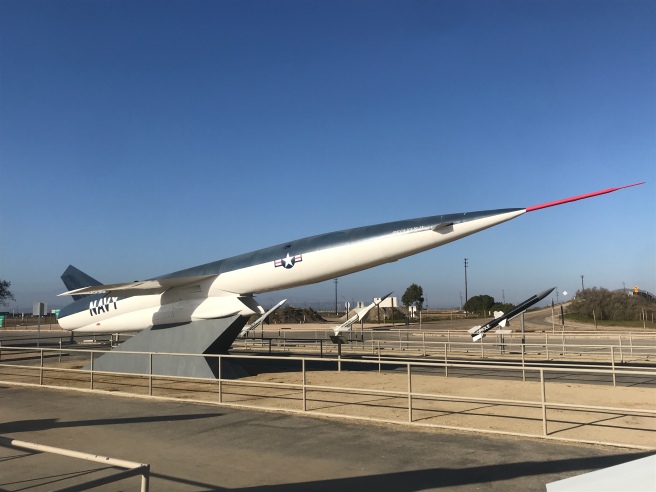 Finally making it back to oceanside riding, I found my way to Leo Carillo State Beach, my digs for the night. I set up camp in a very remote hiker/biker campsite and locked myself in a bathroom with an outlet, for an hour, so I could charge my devices. I felt a little bad when I heard little kids outside, sounding like they were about to wet their pants. Sorry kids, but I was not giving up that outlet. Hope your Mom brought lots of extra clothes for you or she has been teaching you how cowboys and Indians went pottie. 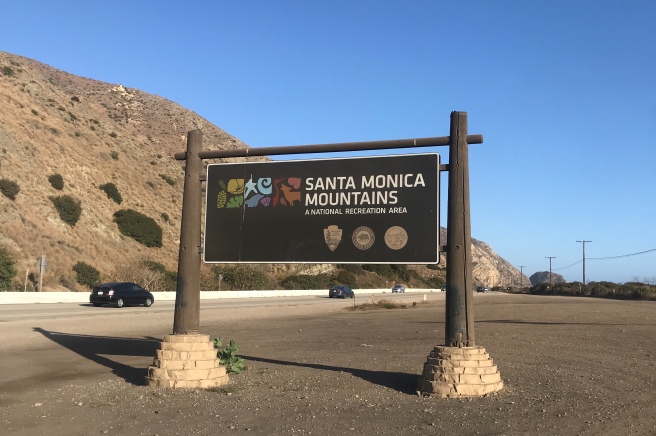 When I got back to my tent, I was relieved to see that a couple of other cyclists had pulled in for the night. Unfortunately, they had just taken some ‘edibles,’ which I’m pretty sure are some form of drugs, because they were higher than a kite–giggling, acting goofy, and saying the stupidest things. Not being one to stick around that kind of stuff, I turned in early and crossed my fingers that they wouldn’t get any stupid ideas that involved the white haired little old lady in the next tent. I already have my death struggle planned, and they wouldn’t have stood a chance.