I got moving early, today, partly because I was in one of those campsites where vagrants have been a problem, so hikers/bikers have to clear out by 9 AM.  Nice, eh?  My real motivation for getting an early start was that I wanted to get to Long Beach Memorial Hospital to see Steve Moss, who went under the knife, yesterday, instead of riding with me–the original plan.  But things kept grabbing my attention along the route.  Sorry Steve.  I meant well.

As I was entering Malibu Beach, there were signs for the Adamson House, and for some reason, the Adams Family, from TV, popped in my mind.  So I was curious and expecting something Halloweenie and haunted. Instead, I found a beautifully and tastefully furnished historic mansion and learned about the ranching family that owned it for a few generations, before the State of California decided it should be bulldozed to build a parking lot for a popular surfing spot–Surfrider Beach.  What kind of screwed up logic is that?  Good thing we have free speech, in this country, so people can speak up and voice their opposition to some of the illogical things government employees come up with.  Opposition from  local people put an end to the plan to level the mansion, and the State ended up buying the mansion from the estate of the original owners for $2.69 million dollars.

The beach behind the fountain and in the next photo is Surfrider Beach.  Check out all the surfers in the second photo. 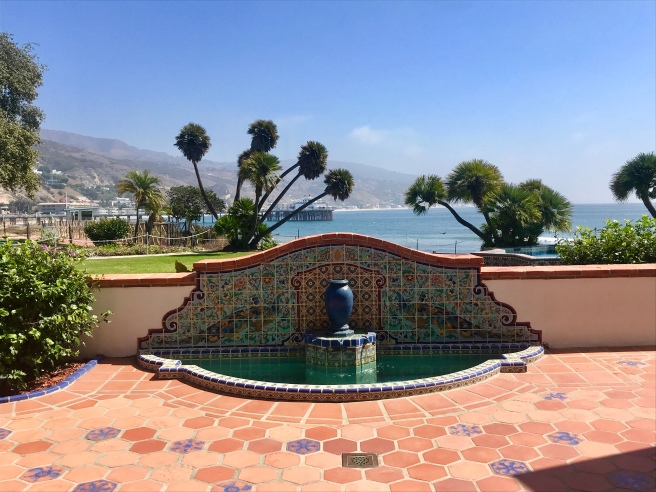 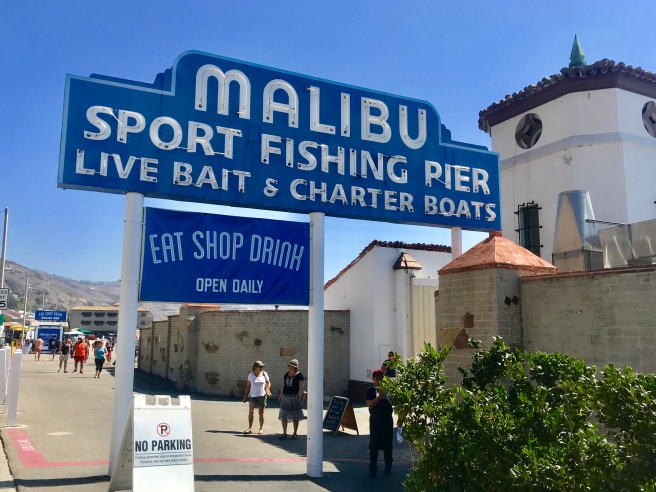 I had to get a shot of this wave mural for my friend Larissa, who is going to learn to surf with me at Big Surf, next summer, right Larissa?

I lost track of how many miles of today’s route were on a path like this one.  I’m thinking at least half of my day.  It felt like I was on vacation, riding a big fat tire city bike. 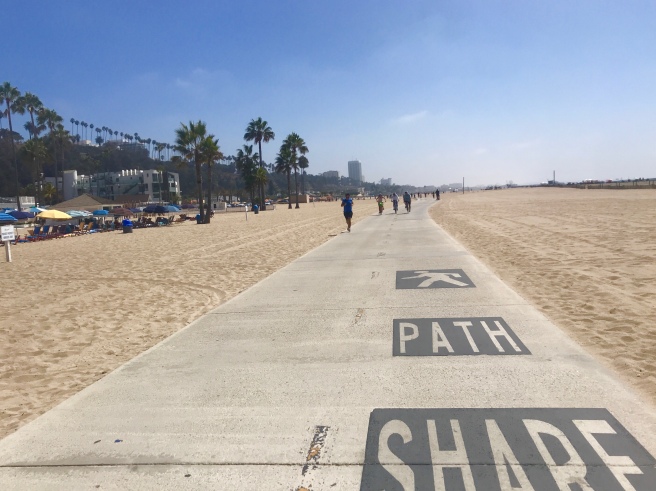 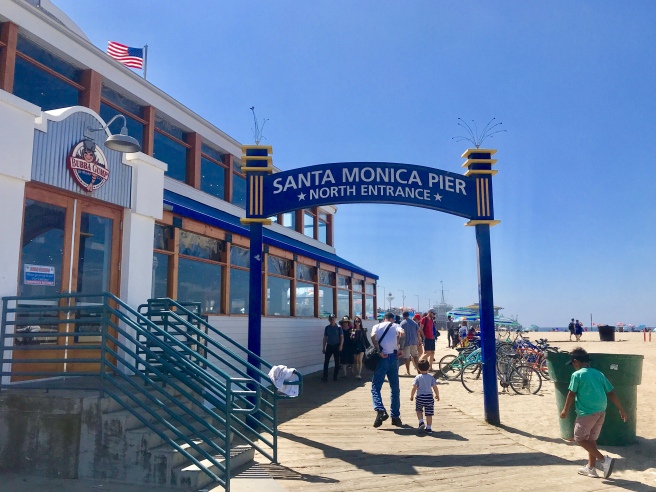 I’ve heard and read about Venice Beach, and I’ve seen it on TV, but today, I actually got to ride down it.  There were shops, eateries, gardens, street performers, vendors, artists, throngs of tourists, homeless and vagrant people, and lots of murals. 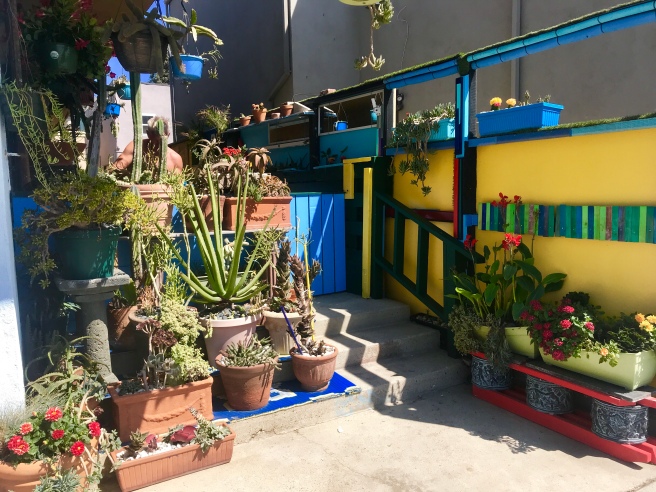 In Vista Del Mar, I came across a man teaching hang gliding lessons.  It stressed me out, watching him keep that hang glider up, with the wind threatening to smash it to the ground, or dump it in the ocean, or push in into the road.  But the instructor always knew how to react to every wind force that hit the glider.  His two students REALLY stressed me out.  They didn’t, so each attempt ended pretty quickly, and came way too close, for me, to crashing in the ocean, onto the sand or into the road.  I will file hang gliding away on the list of things I have no interest in ever trying, along with bungee jumping.

Just an observation.  Californians sure do enjoy their weekends.  They were out in force, today–cycling, heading to the beach, on the beach, in the shops, playing volleyball, hang gliding, tanning, surfing, throwing Frisbees, eating out, etc. 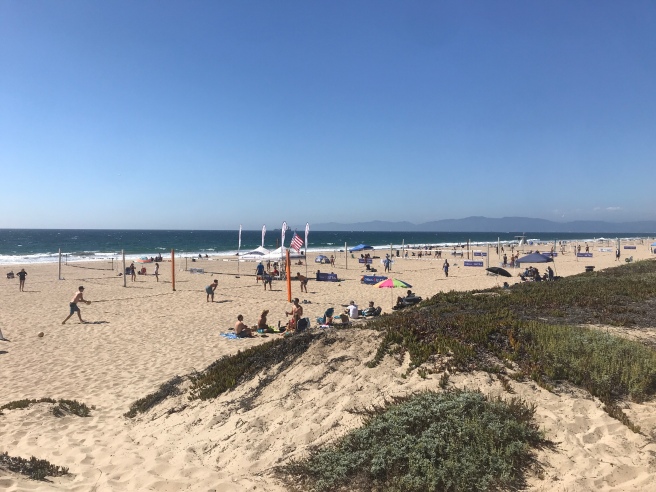 Redondo Beach was my last beach for the day, before heading inland to get to Long Beach.  And I like a town with a good Veteran’s Memorial.  Once out of Redondo Beach, I slogged through heavy traffic on surface streets, as I made my way to the hospital. 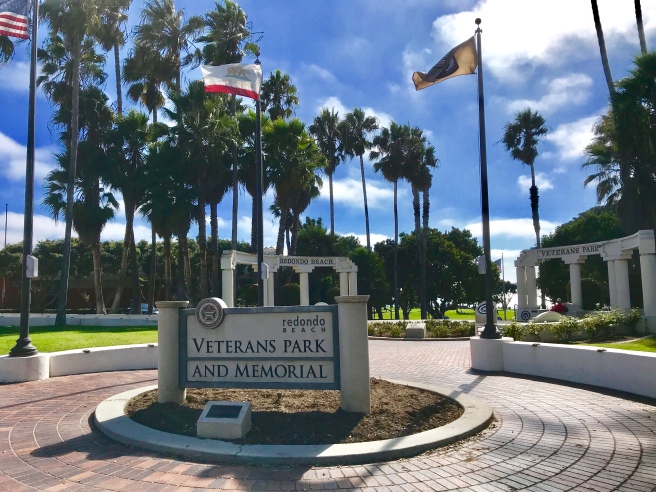 Day Off in Long Beach

Well, what can I say about this day off?  I did three things.  Went to church–FINALLY; spent time with my friend from Saudi Arabia–Kok (Hiroko Kurotobi); and visited Steve Moss in the hospital.  All three are in the top tier of things I have had the chance to do on this trip.

But first, let’s talk about the exotic plants I saw in Long Beach. On the way to church, I ran into these bananas, just hanging down over the sidewalk.  Wow! I felt like I was on a banana plantation in Hawaii.  Then later, when I was going to the hospital, the flowers below were in a hospital planter.  Do plants like these grow in Arizona?  If they do, I’ve missed them. 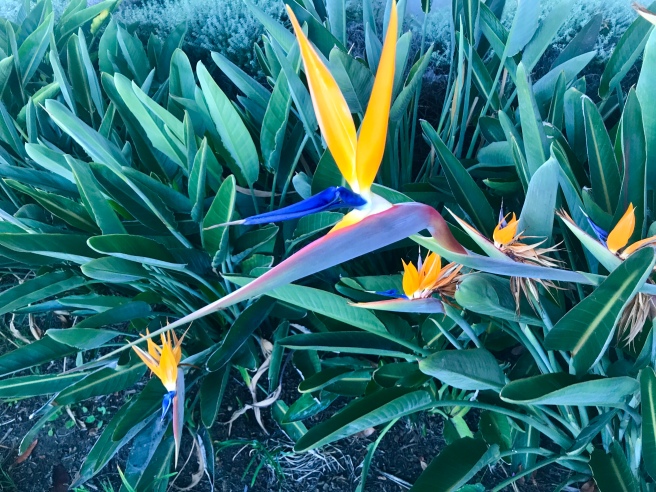 I met up with Kok after church, on Sunday, and it was so good to see her!  We talked and talked.  She will soon have five grandkids.  I now have three.  I lost both of my parents during and just after the tour during which I met her.  She is now her elderly Mother’s caregiver, which includes preparing Japanese dinner for her every night.  She is good at everything she does, but instead of being a pro golfer, right now she is channeling her talent into a Japanese dance group that performs at different venues each month.  She is such a great person and example to me.  So after we had some lunch, she took me to Wal-Mart to buy a few grocery items for the road as well as a level and picture hanging putty.  “What for?”, you ask.  So we could go back to my Airbnb and straighten out the 70+ crooked pictures and pieces of art hanging on the walls, while the host is in Arizona with her son, who is dying of cancer.  I’m not sure she’ll ever notice, but it was the least we could do for her.  Thanks, Kok, for helping me with another of my insane projects.

I stopped in to see Steve on my way into Long Beach, the day after his surgery, and spent more time with him Sunday evening.  His son, Joshua, who lives in Portland, had taken time off work to look after and advocate for him during his hospital stay.  Josh brought in food (the hospital food was not edible–I tried it); played games to get his Dad’s his mind off the pain; helped his Dad get around and transfer between his bed and chairs; helped his Dad shave and get dressed; gave me rides to and from my AirBnb, so I could visit, etc., etc.. etc.  Joshua basically did everything Steve couldn’t do for himself, which at this point in time was just about everything.  What a great son!

And for a guy who was in a lot of pain, Steve was pretty darned happy.  Something about being in his room gave me the giggles, and I really couldn’t stop laughing, the entire time I was there.  There were just so many things to laugh about, and I don’t want to embarrass him by detailing them here.  I try to be a compassionate person, but this time around, all I could do was be cheery.  Sorry, Steve.  I’ll try to be more caring, next time around, but let’s just not have a next time around, okay?  No more bicycle crashes in the future, please.

Check out our new ‘Woodie’s’ wooden sunglasses.  They’re going to be valuable, someday, according to the guy whose girlfriend was handing them out on Venice Beach.