Not knowing anything about Astoria, I left it to Dale, who lived here 40+ years ago when he was in the Coast Guard, to show me around. We started out at the Lewis and Clark National Historic Park–a very cool place. After checking out the museum, we headed out to explore a reconstruction of Fort Clatsop, where the expedition party waited out the winter of 1805-1806 at the mouth of the Columbia River. Learning about the individual members of the company, including, of course, Sacajawea and William Clark’s unnamed black man servant, was fascinating.

Then we were off to Fort Stevens, built during the Civil War to defend the mouth of the Columbia River. The museum was pretty much non existent, but there was a neat little World War II era Jeep, that brought back memories of Hawkeye Pierce. We were able to wander around two large bunkers with emplacements for artillery, and a third (Battery Russell) with a huge gun in place. 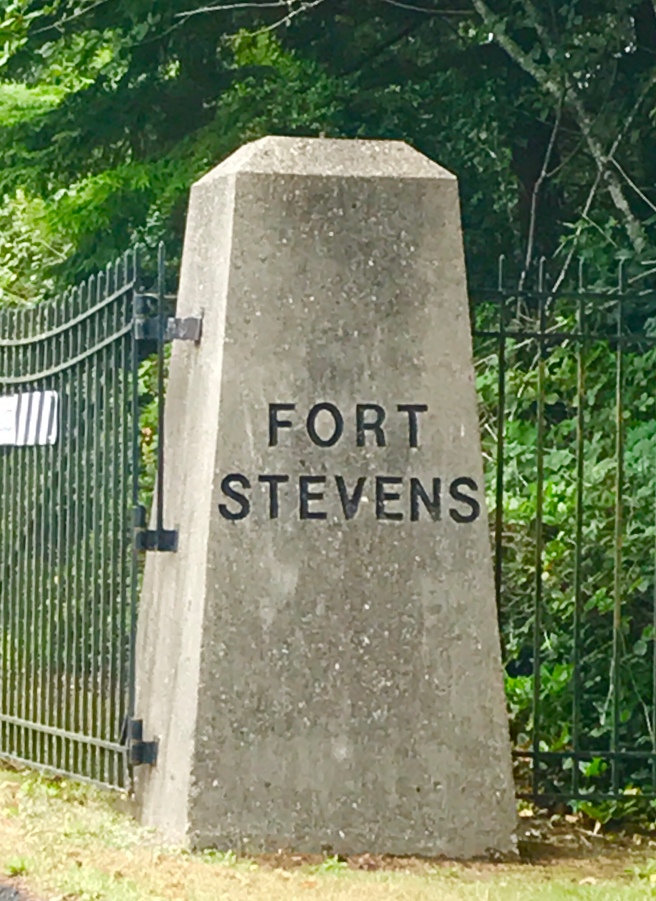 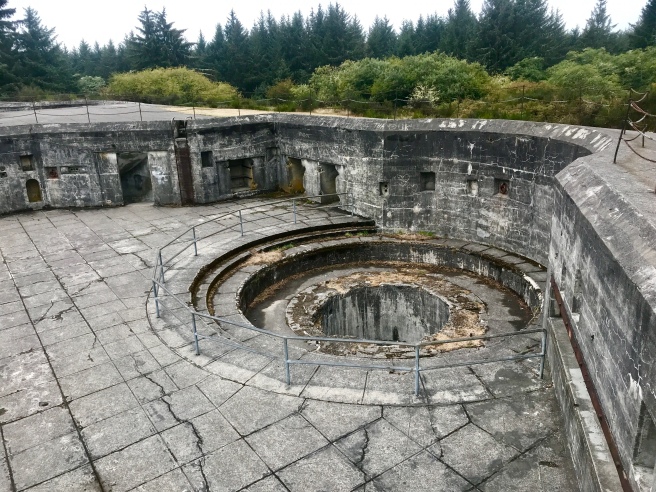 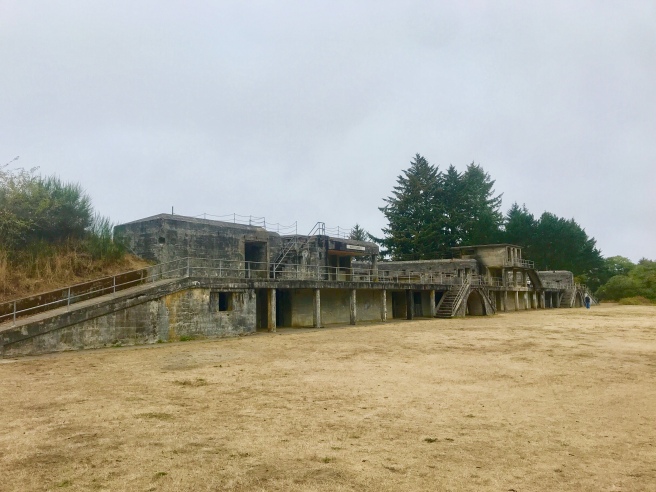 In 1942, the fort was fired upon by a Japanese submarine, making it the only military installation in the continental US to come under enemy attack. It wasn’t a very successful mission for the Japanese, as only one of the 17 fired shells hit land, and that one didn’t actually hit a target. How did the commander of the fort react to the attack? As much as the men on duty in the bunkers wanted to take out that submarine, he ordered them to stand down and hold their fire, as firing their guns would have given their position away to the Japanese. Smart fella, eh?

Here’s a photo of me with a replica of the artillery shell used by the Japanese.

We were not quite through with things military when we headed to our next stop, which was at the top of Coxcomb Hill, the high point overlooking the mount of the Columbia River. I’d been hearing about this thing called the Astoria Column all day, and now I was finally going to see what people had been talking about. Patterned after the Trajan Column in Rome, the 125 foot column is the world’s only large piece of memorial architecture made of reinforced concrete with a pictorial frieze that spirals upward, depicting the discovery of the Columbia River by Captain Robert Gray in 1792, the winning of the West and the arrival of the Great Northern Railway. Inside is a 164 step spiral staircase that leads to a viewing platform on the top. It is from there that we each launched a couple of cheap balsam airplanes to see how far they would fly. My first flight immediately spiraled toward the ground, then caught a draft and drifted upwards, above, through and beyond the trees for probably 7 minutes. After seeing my plane fly around, one little boy, who I’m thinking was 9 years, and who complained loudly as he followed us up the stairs to the top, exclaimed to his Mom that if she gave he a couple of dollars, he would go down to gift shop and buy a plane to send flying from the top. She gave him $10, and he was back shortly with enough planes for every member of his family to have two flights. Most of them lasted less than a minute, but his probably lasted 10 minutes. Amazing. 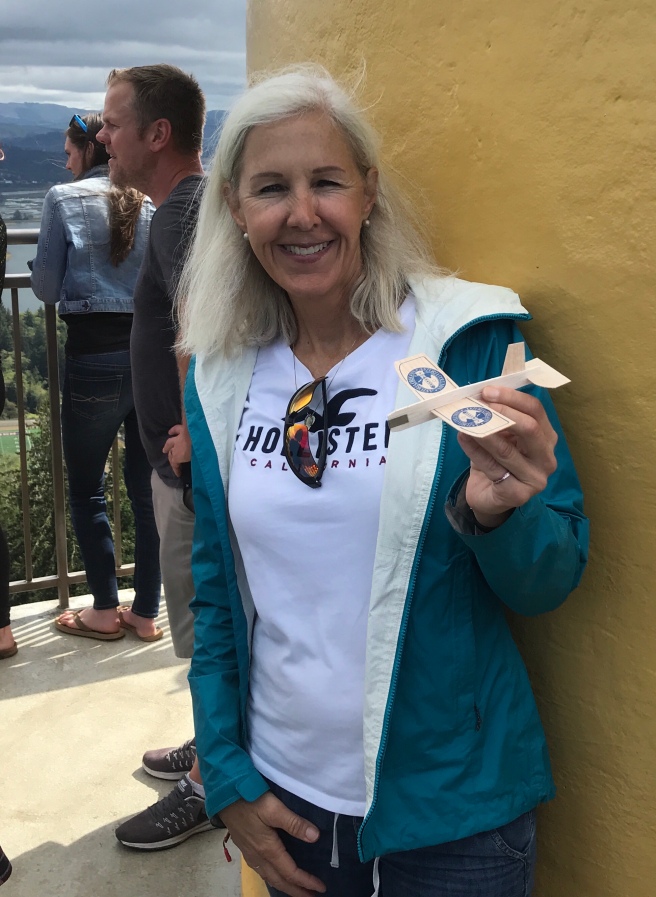 The next stop on my tour was the Astoria Riverwalk, where we made a quick stop at the Columbia River Maritime Museum–quick only because it was 40 minutes from closing. We watched a 3-D movie about hurricanes, then hightailed it over to the Dauntless, a Coast Guard Cutter that was docked nearby. The ship had numerous decals on the side of the bulkhead, each marking a millions pounds of either marijuana or cocaine captured by the crew. We didn’t count them all, but they have capture a lot! 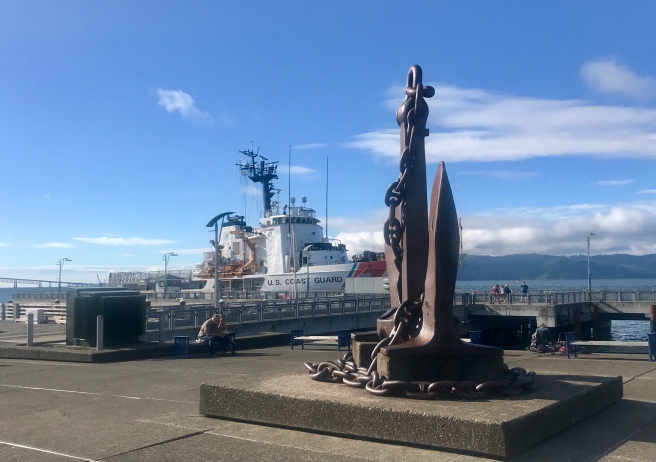 Further down the Riverwalk are the city docks, a good part of which have been taken over by harbor seals, who lay around, bask in the sun, bark, fight, sleep, and otherwise prevent boats from docking there. They were pretty darned entertaining.

Our final stop of the day was Seaside, where we found a spot to watch another beautiful sunset. 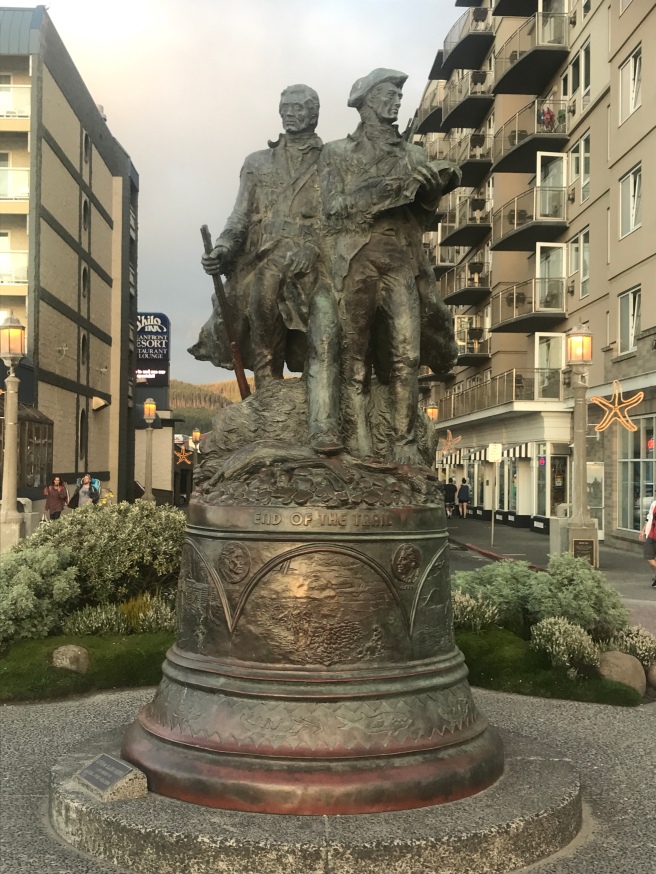 Thanks, Dale, for making the time to take me on a whirlwind tour of the best sights in and near Astoria! Had a great day!