I hated to leave Astoria, this morning. There was so much more to see and do, and who knows when I’ll get back there again. Hopefully sooner than later. I goofed off for a couple of hours with Dale, while attempting to catch the blog up, then ate “brunch” at McDonalds–a Big Mac AND a fish filet sandwich to hold me over, in case I couldn’t find a place down the road for dinner.

My ride started out on the Astoria Riverwalk, which dumped me off on Highway 101. I stayed on the highway all day, today, and it worked out perfectly. Oh, there was traffic, but there was also a nice shoulder for probably 95% of the day. Before even getting off the Riverwalk, I stumbled onto the Astoria Maritime Memorial, which pays tribute to ships captains, pilot board captains, etc. 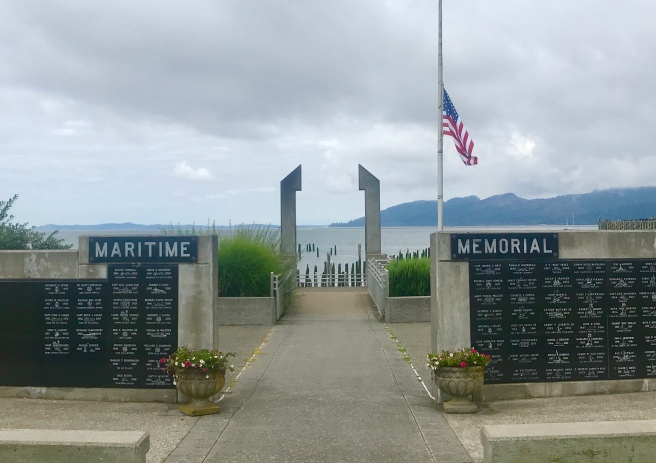 Once back on Highway 101, I crossed a long bridge to get to Warrenton and begin my journey south. The view across the bay was amazing. The skies were cloudy and ominous, but luckily for me, rain never materialized. 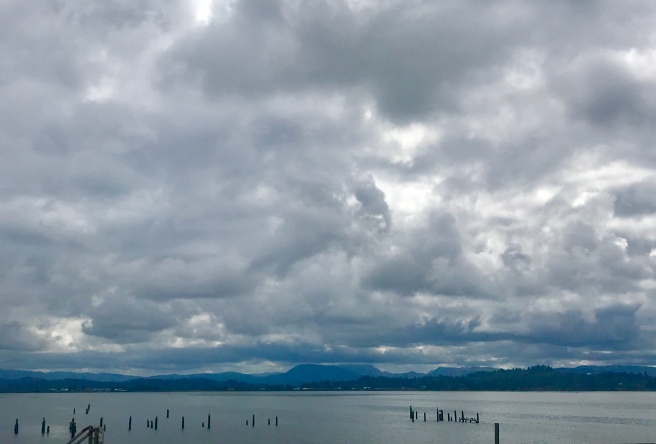 And now I found myself on the Veteran’s Memorial Highway headed to Seaside. You know, I served in two of those conflicts: Desert Storm and Operation Iraqi Freedom.

Passing through Seaside several times in the previous two days, I never had a chance to catch a photo of the colorful sign at the entrance to the town.

My next stop was Cannon Beach, which was named for a cannon that washed ashore on the beach after the USS Sloop of War wrecked, while attempting to leave the Columbia River and enter the Pacific Ocean. Apparently, it’s a treacherous maneuver, due to the currents.

In Cannon Beach, I took a few minutes to reacquaint myself with Haystack Rock, the first of many rock formations I encountered today. 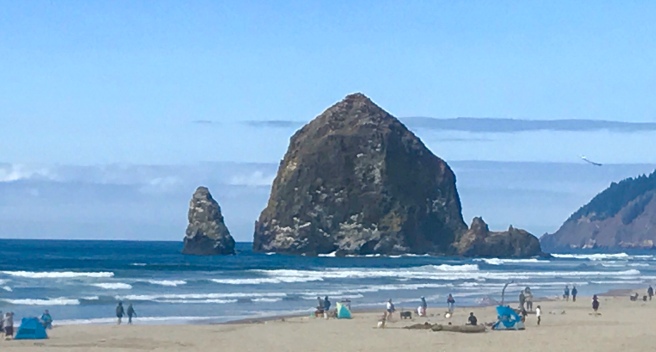 And a few more miles down the road, I passed through Cape Arch Tunnel, which would have been scarier, if there hadn’t been a button to push, before I entered the tunnel, that lit up warning signs at both entrances to the tunnel, warning that a bicycle was in the tunnel and to slow down to 30 mph. I can’t say that all the vehicles slowed, but the ones going my direction did. 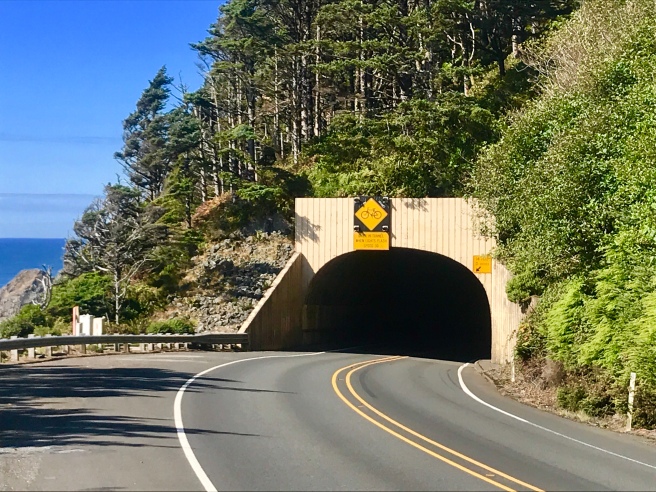 The tunnel was the beginning of a long climb almost to the top of Neal-Kah-Nie Mountain, the tallest mountain on the Oregon coast. There were spectacular views from several viewpoints. 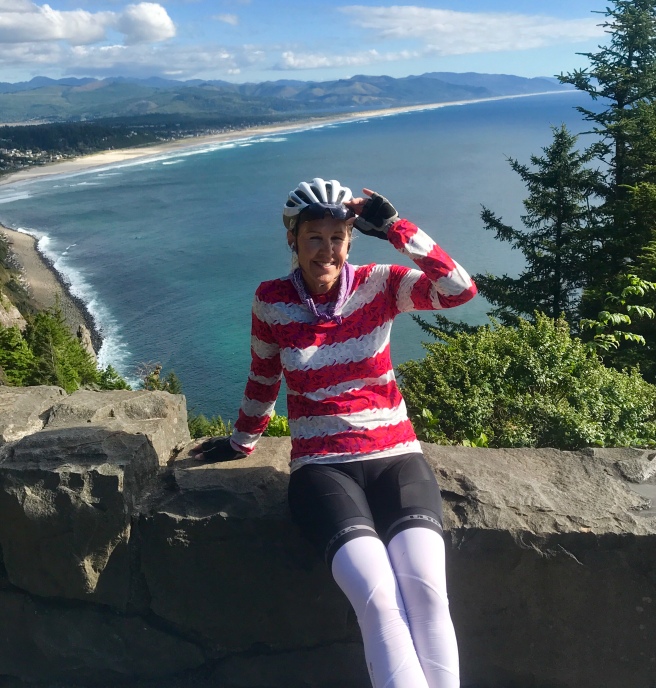 The best part of the climb was, of course, the descent, which took me through Manzanita and Nehalem, where I stopped to refill my Gatorade and get a bite to eat.

On leaving Nehalem, the route did my favorite thing–it met up with some railroad tracks and the Nehalem River, which pretty much guaranteed there would be a lot less climbing. As I looked out over the river, the vistas were amazing. This is definitely a beautiful spot. 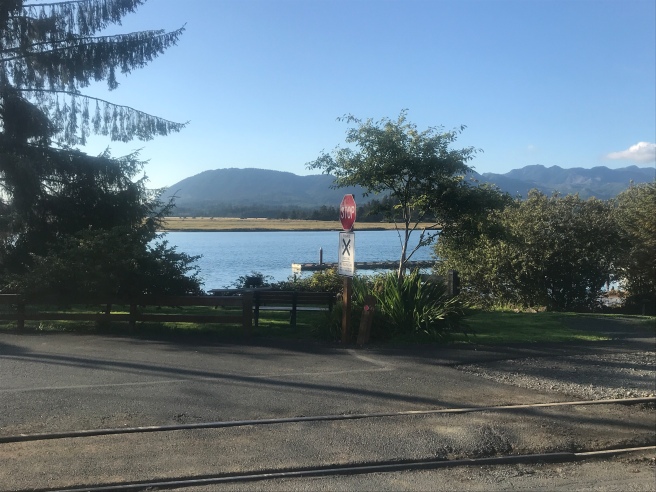 I had the wind at my heals, now, for the first time on this trip, and I was flying along. I flew through a couple of small towns, and pretty quickly found myself at Rockaway Bay, where I planned to camp at Barview Jetty County Park.

When I pulled up to the park office, it had a “No Vacancy” posted. What have I been thinking? We’re coming into Labor Day weekend, and campsites along the coast will be scarce. But in Oregon, campgrounds have campsites set aside for hikers and bikers, who tend to not have solid plans and arrive with very little notice. As fancy RVs and travel trailers were being turned away, I got myself a campsite, set up my tent, and took a shower. The weather forecast says the temperatures will be down to 52 tonight. I hope I don’t freeze! 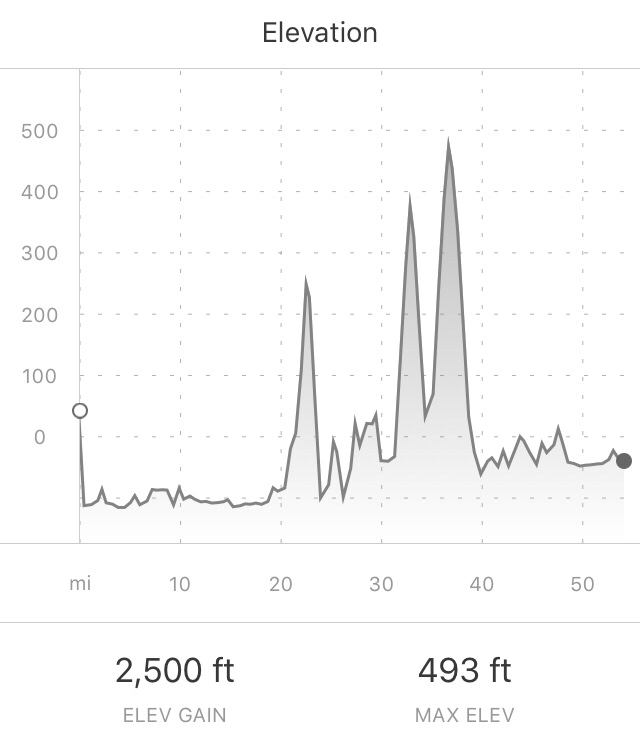