Let me just start this post by gloating about how happy I am to be in Florida!  We only have 8 cycling days left to go before this adventure comes to an end.  And all of us are thinking…..what are we going to do when it’s over?  We have a lot of time to think about it as we peddle along, and I have several good ideas.

Chris and I put out the breakfast and lunch fixings in the community center of the RV park, and we broke camp early to get in line at the ferry, which happened to be across the street from the campground. 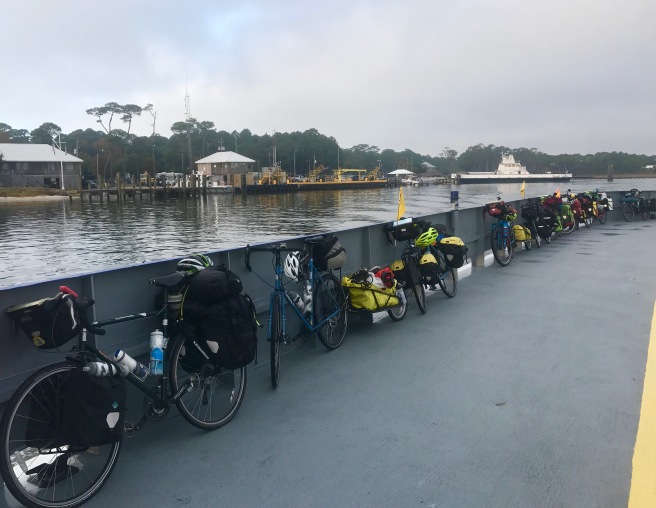 The ferry took us 4.5 miles across Mobile Bay to Fort Morgan, Once we departed the ferry, we toured the Fort Morgan historic site together. Our destination tonight was the Oak Grove Camp Ground on Naval Air Station (NAS) Pensacola, and since only 4 of us have military IDs, the other 6 were going to need one of us prior military with them to get on the base. Our we now included Joe and Tom, who usually ride together.  Eric also started out with us, but he dropped back after lunch.

A little history here:  Fort Morgan was build on the site of the former Fort Bowyer, which was built after the War of 1812 to defend Mobile Bay.  In 1814, the British attacked Fort Bowyer twice.  The first attack failed, but in the second attempt, the American commander surrendered.  Before the British could continue taking territory along Mobile Bay, they received word that the war was over, so they withdrew.  Apparently, after the war of 1812, the US began a program to strengthen its coastal defenses and decided to build a better fortification at the same location.  Using slave labor to built the new pentagon shaped, masonry fort, construction was completed in 1834.  Fort Morgan came into play during the Civil War (the Confederates surrendered it to the Union), and both World Wars I and II.  Fascinating stuff, eh? 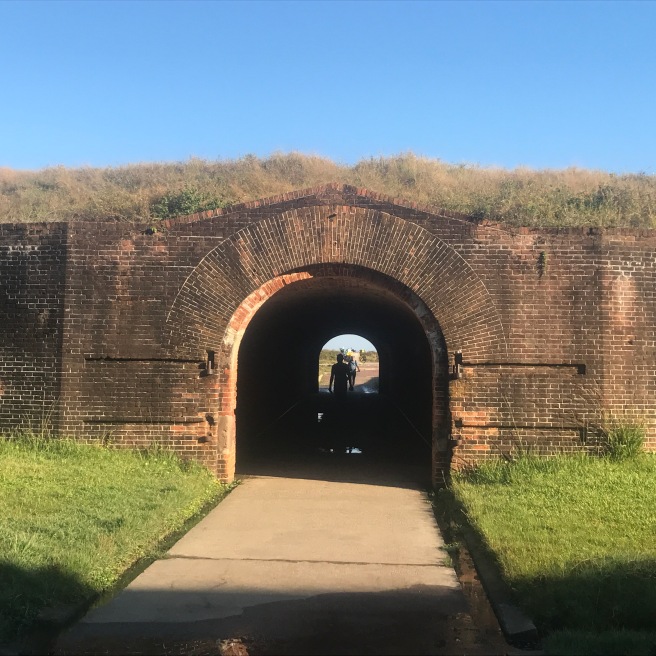 Once we left Fort Morgan, for most of the day, we rode on a long scenic peninsula that was so narrow, you could see the white sand and water on both sides from the road:  Mobile Bay on the north side and the Gulf of Mexico on the south.  There was a lot of open beach that looked untouched, but there were also a plenty of houses on stilts and tourist areas with high rise condos, seafood restaurants and shops.  Important to us was cycling on a nice bike path and/or wide shoulder the entire day, that made us feel  like we were on vacation too.  Oh wait.  We are. 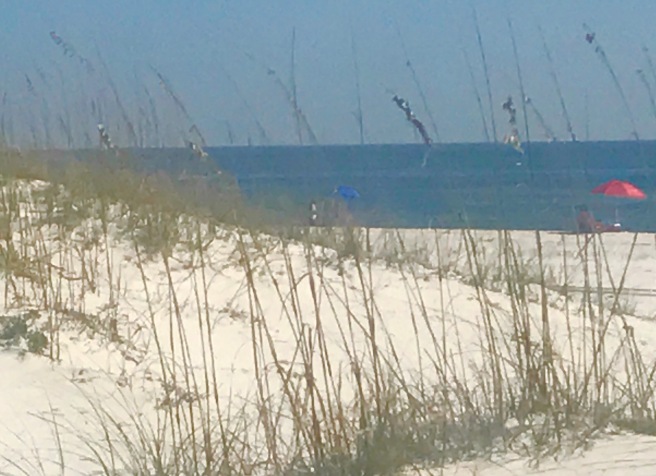 When we reached Gulf Shores, the plan was that we would meet up with the rest of the group for lunch at a famous seafood restaurant–Lulu’s.  The others arrived before the place opened, so they ate elsewhere, leaving us with just a party of 5.  The food was delicious, but expensive, as in–I blew my entire food budget for tonight and all day tomorrow (we have a day off) on just one meal.  Dang it! 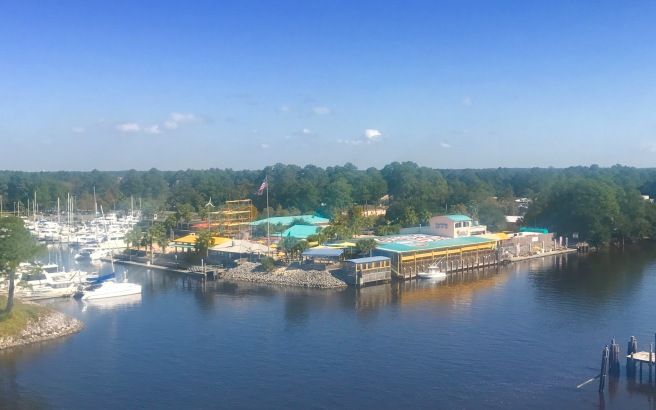 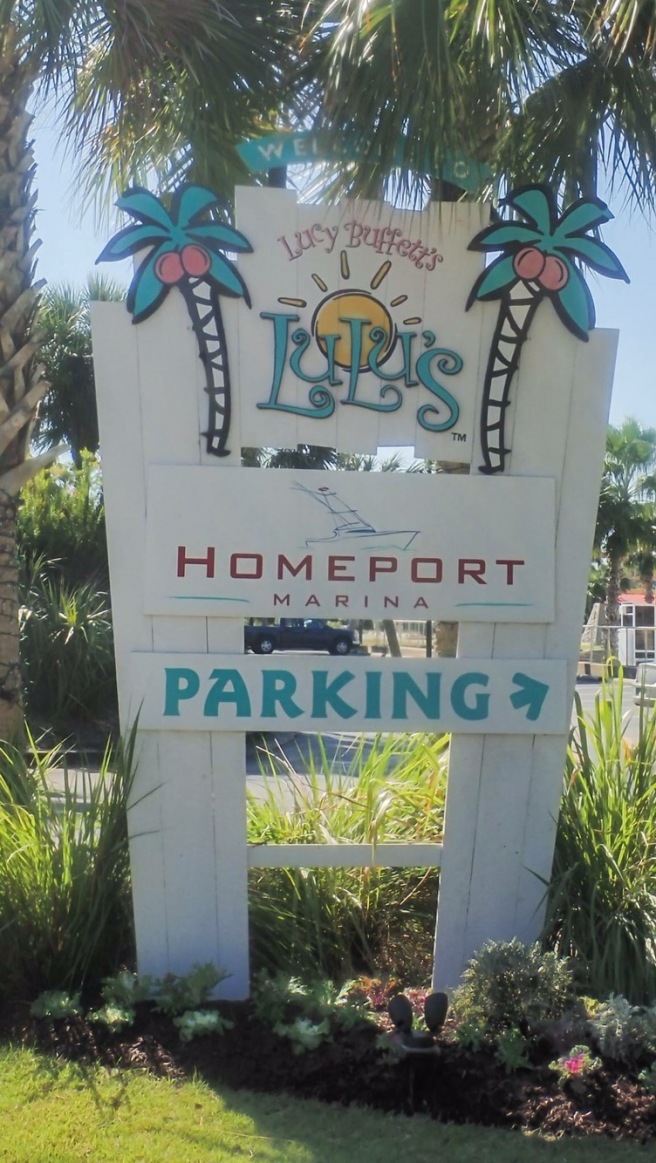 Back in the saddle, we continued down the peninsula till we reached FLORIDA!!! 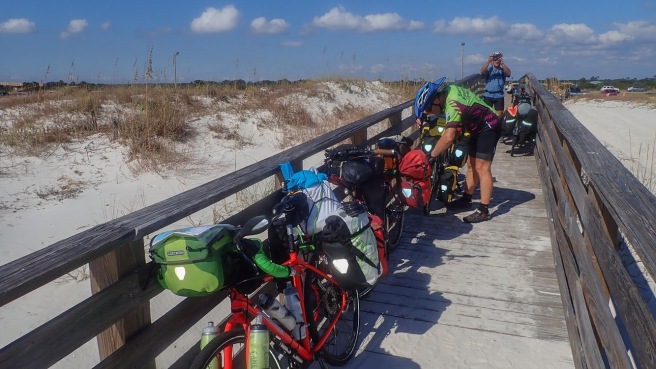 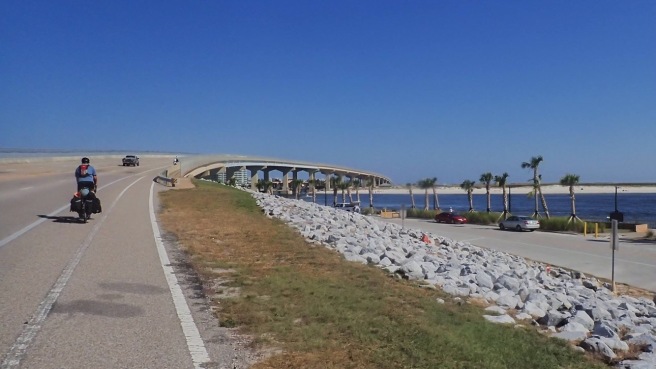 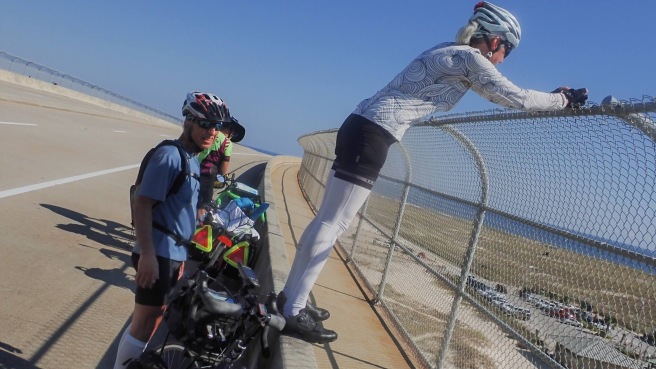 About 16 miles later, we were at NAS Pensacola, looking for our campground. The natives became a little restless when they found out that there was no food available anywhere nearby, and that most of them couldn’t get to food or shopping without an escort. A few of us ordered pizza from Dominos, and a few others caught a cab to town to eat out. I was pretty wiped out, so after dinner I went to bed early.