Last night was “interesting.”  We stayed in an RV park where even the manager didn’t think it was safe for us to leave our bikes outside, so we slept indoors on the floor of the community center with our bikes beside us.  And the place wasn’t very roomy for so many grown snorers and early risers and late risers, etc., but we survived.  So today, we were headed to Duncan, Arizona, and because there isn’t a grocery or convenience store in Duncan or actually anywhere between Safford and Lordsburg, New Mexico, before we left Safford, we had to make a run to the grocery store with the whole group to pick up and parcel out our breakfast and lunch food for the next day (our plan was to eat dinner in a restaurant).

We haven’t ridden together as a group since our check ride in San Diego, so it was fun while it lasted.  And how long did it last?  For less than a minute, once we pulled out of the grocery store parking lot.

Being the Private Benjamin that I am, I parted from the group first, because I forgot to pull my 4 Gatorade bottles out of the freezer before we left the RV Park.  Duh!  The place was completely locked up, and the manager was nowhere in sight, so I started to look for windows I could break into.  I felt a little like a criminal, but I needed those bottles.  While I fiddled around with a window screen, someone started opening one of the doors from the inside.  Eureka!  The cleaning lady was inside cleaning and heard me outside.  I was happy to see her, and she was happy to see me.  I got my bottles and she got all the food and beer our group left behind.

As we rode out of Safford, we passed some of Gila Valley’s fertile fields– the ones I mentioned yesterday, but forgot to get a photo of.  There are miles and miles of mostly cotton fields with some alfalfa.

With my water bottle delay, I was being swept by Ken, our fearless leader, so I was pretty motivated to catch up with the other riders.  Finally, we caught up with Ed, then Tom C., then Neal.  From then on, there were other riders to banter and take breaks with along the way.


Today’s ride was much more hilly than the maps indicated, as we discussed it at last night’s map meeting.  Rolling hills wear me out much faster than long uphill ascents followed by long downhill descents.  After just 40 miles, I was more wiped out than I was yesterday after 80+ miles.  I think the exhaustion is cumulative, which is bad, because we have some significant climbing coming up heading into Silver City, New Mexico in a couple of days.  I’ll worry about that later.

The scenery was constantly changing, today.  From farmland to lush desert, to sparse desert with just creosote bushes, to desert that looked like it hadn’t seen rain in a long time.   Overall, it was beautiful, with lovely vistas in every direction. 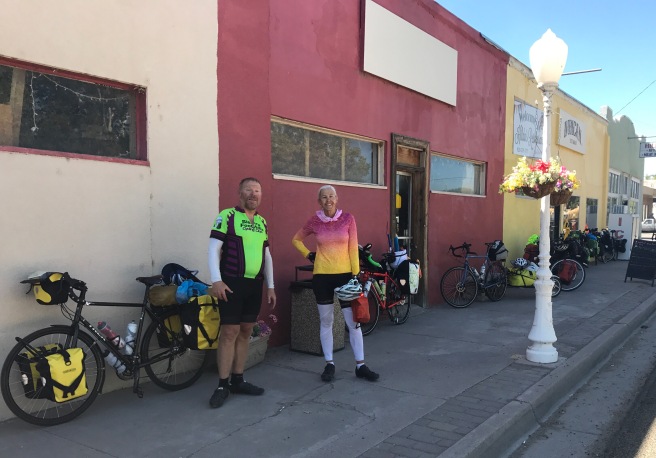 Once we arrived in Duncan, we congregated at Hilda’s Restaurant–the only restaurant in town, and took over 4 tables.  At the end of each ride, we all have tales to tell about our day. It’s fun to hear each other’s perspectives on the things we all saw throughout the day.


Our next stop was Centennial Park, where we pitched our tents (Ken coordinated with the city to make sure they don’t turn the sprinklers on us during the night).  Once the athletic programs for students were over at the high school, we got to shower in the football locker room.  FYI, I have never bathed in such a filthy shower.

I pulled a chair in there to put my various hygiene items, clean and dirty clothes, towel (more like a little shammy), etc. on; took my shower; then when I turned to grab my towel, it had fallen in the floor–the creepy, dirty floor.  In the real world, I would have thrown it away or burned it, but I didn’t have another option. So I dried myself off with the parts of the towel that hadn’t hit the ground.  On the way out of the gym, one of the guys told me that they had forgotten to give me the towel provided by the gym.  Nice. 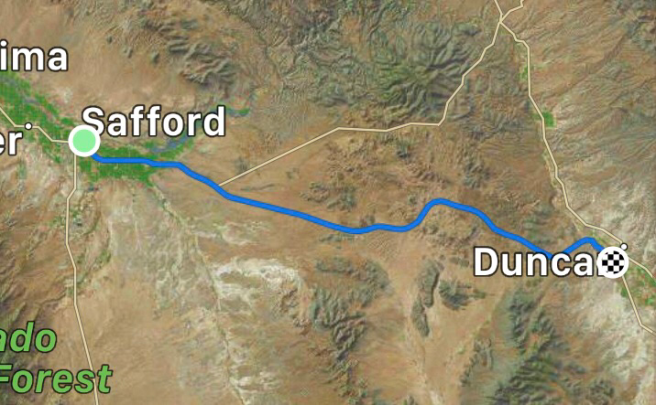