Kit and Lou–I love you the most! Thank you so much to giving this birthday girl the gift of sleeping in a bed, indoors, last night. I slept so well, and while the guys were taking down wet tent rain flys and footprints, this morning, I was stuffing my silk sleeping bag liner back into its dry little stuff sack with ease.

We got on the road a little later than usual, because we could–we had a shorter day ahead of us. Our first stop was a diner in Pulaski. While waiting for breakfast, we checked the weather forecast, and it was a definite for rain tonight. Before looking for a motel, we put a call in to Can, our campground host at Stysh’s Brown Barn Campground, to see if he had a pavilion we could sleep under, to keep us out fo the rain. He said no to the pavilion, but told us we could sleep in the barn they use for events. We were wondering if there were animals in the barn, or if it was strictly for people.

We spent the majority of the day climbing Tug Hill, which is really a region, not a hill. Located between Lake Ontario and the Adirondack mountains, Tug Hill is 2100 square miles of heavily forested land with the highest amount of snowfall in the Eastern US and the lowest concentration of people. There were a lot of snowmobiles parked outside homes and signs for snowmobile routes.

The scenery of the day was typical–forests and lots off little towns, almost all with a veterans memorial monument of some kind. Nothing in particular stood out, but maybe I’m not paying as close of attention to the scenery, after over 2 months of riding through it. We planned for lunch in Osceola, the mid point of our ride, but when we arrived Osceola, all the businesses in town were closed–yes, all of them. We also needed a restroom, and were lucky to find a nice, clean outhouse behind the one business that was just closed for the day–not permanently. We took a break to eat, drink, rest and talk to a few of the people, nearby, then we pushed ahead to West Leyden, a much bigger town, that we hoped would have at least one restaurant.

When we got there, I stopped to ask a local what our food possibilities were, and he pointed down the street to the Milk Plant Tavern. Two minutes later, we were parking our bikes and heading indoors. Inside were a lot of friendly local folk, who looked like they were regulars, there, and several of them were interested in our ride. All 3 of us ordered the daily special, which was all-you-can eat spaghetti for $4.00. What a deal! But, of course, there were meatballs and beverages, and since it was my birthday, yesterday, I ordered a piece of pie for dessert. The service was great, and the food hit the spot.

After lunch, we only had only 10 miles left to go. When we arrived Boonville, we headed over to the TOPS grocery store, to pick up needed supplies, as well as food for dinner. Then we followed Google Maps to our campground. The app provided a couple of routes for bicycles, so naturally, I picked the shortest one, and we were surprised to again be on the tow path of a 19th century canal.

This canal, the Black River Canal, connected the Black River, which runs through Boonville, to the Erie Canal. In its day, the canal had a world record 109 locks, 70 of which raised boats up a 693 foot gorge, and 39 that lowered them down a 386 foot descent. It was a very complicated engineering feat and construction project, due to the terrain, the types of soil involved, and the water levels of the bodies of water being connected. I found the image below online, so you can see how multiple locks were built in succession to accomplish a big rise or drop in the terrain. Fascinating stuff, eh? 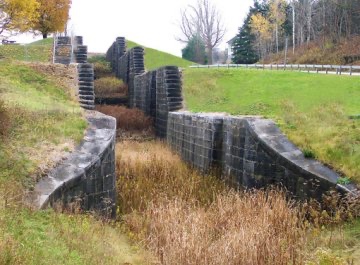 The map then took us off the canal and onto a little country road that took us to Stysh’s, and our barn awaited us. And it was a HUGE barn, where a large wedding party had been held the previous night. We were offered the entire upstairs, to sleep in, then downstairs were the bathrooms, showers, a large fully stocked kitchen and an even larger recreation and game area. It was cool, in the basement, but upstairs, was pretty steamy, till the sun went down, so we only set up our sleeping zones in the area that had large fans. We prepared dinner in the kitchen, sat at the tables to work on our blogs, and had a nice quiet evening–tucked away safely in the barn, with everything we needed to be comfortable for the night.

The torrential downpour hit during the night and lasted for hours.