Breaking camp in Plaskett Creek took a couple of hours. The neighbors kept coming over to talk, and I was feeling lazy and talkative, all at the same time. Madison came back over with a gift of some Goat Brie, to make sure I had enough tasty, nutritious vittles for the road.

Tommaso and Gulia, an Italian couple, who are currently living/working in the US, came over to chat. A PhD Computer Scientist, working at Berkeley on independent research for driverless vehicles, he told me about Parenzana, a rails-to-trails type route I hope to take some day. Starting in Italy, it passes through Slovenia, then ends up in Croatia. He drew me the map below.

Then once I got riding, I kept running into people along the way. This gal, riding a Harley with a pink helmet, and I had to ham for her boyfriend. 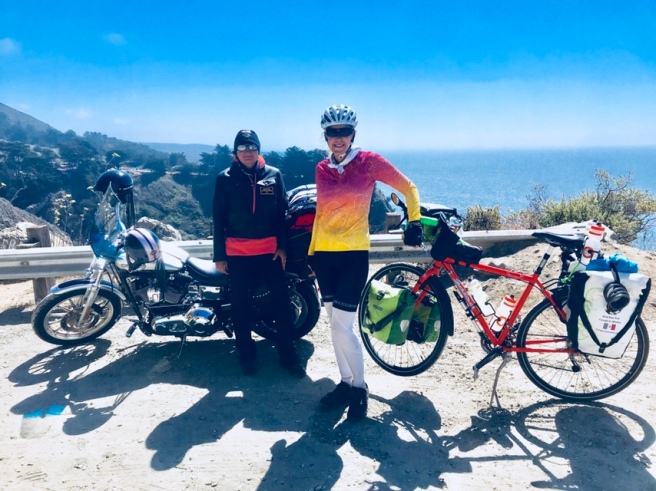 I stopped for lunch at Ragged Point and enjoyed a little touring cyclist reunion. That and the most delicious hamburger I’ve eaten in years. 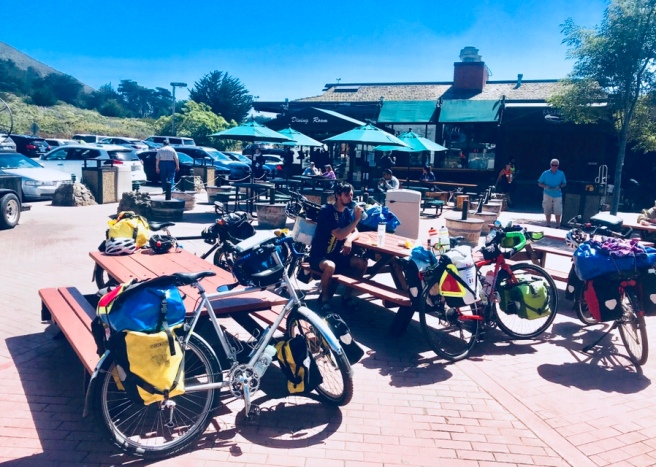 After lunch, I passed into the Los Padres National Forest and made my way to the Piedras Blancas Light Station. No joy, it closed after Labor Day, and there is no getting close to it. 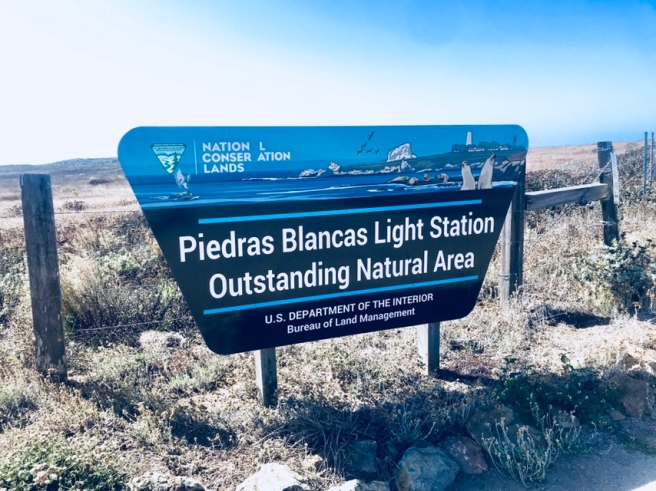 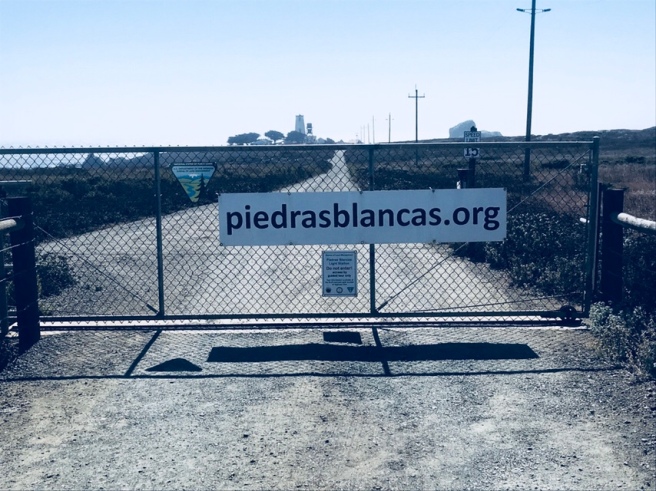 But up the road was something way better than a lighthouse–a preserve for elephant seals. And were there elephant seals to behold? Oh yeah, hundreds of them. They were mostly sunning and napping, I presume, but the ones that were moving were really fun to watch. 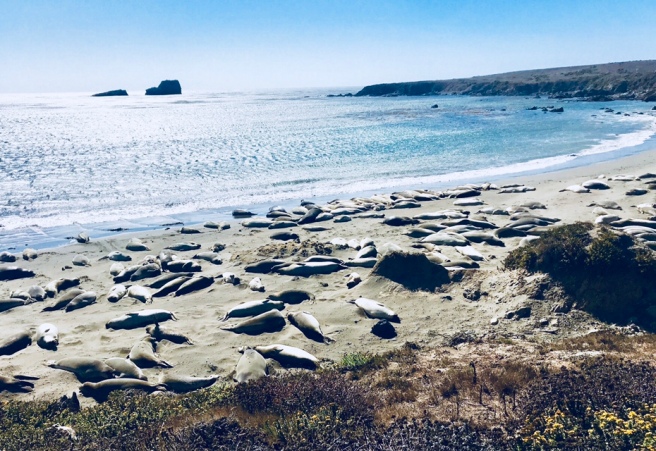 Then I was on to more ocean scenery, some kite surfers, San Simeon and the Hearst Castle, the Veteran’s Memorial in Cambria (I hate myself for missing Linn’s Easy as Pie Cafe), Harmony (what a nice place to live), and Cayucos. 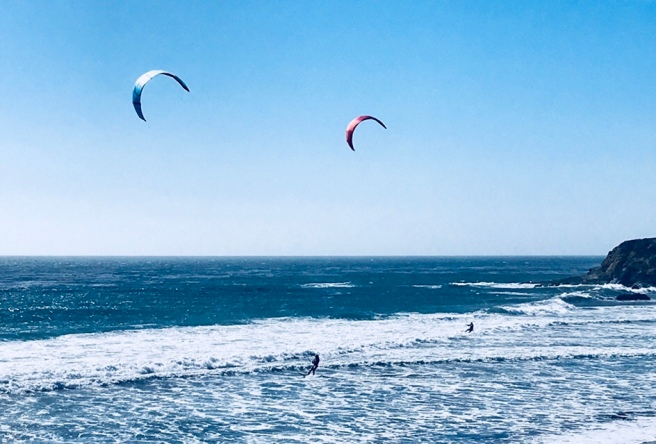 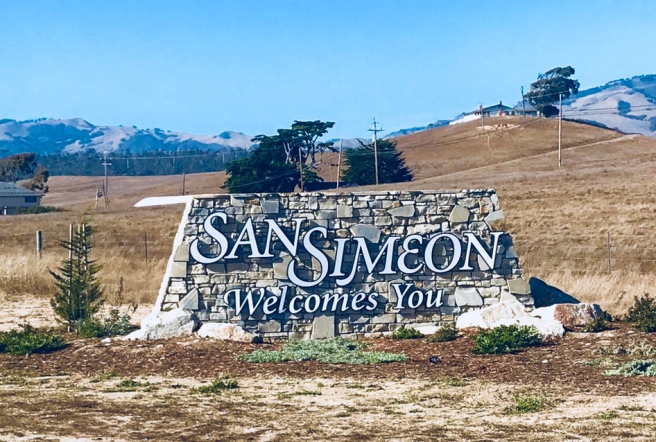 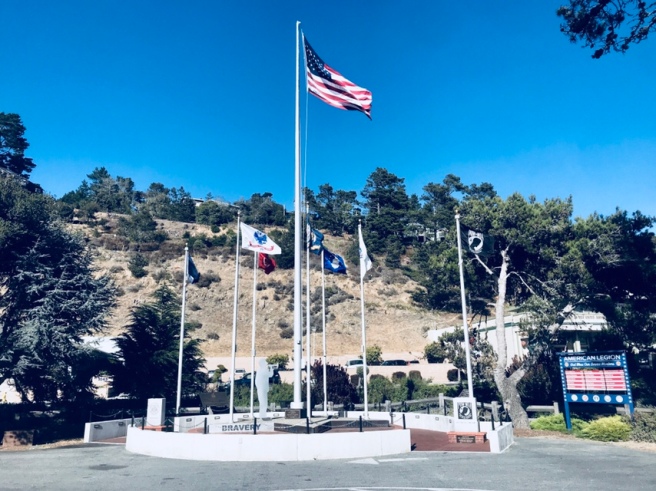 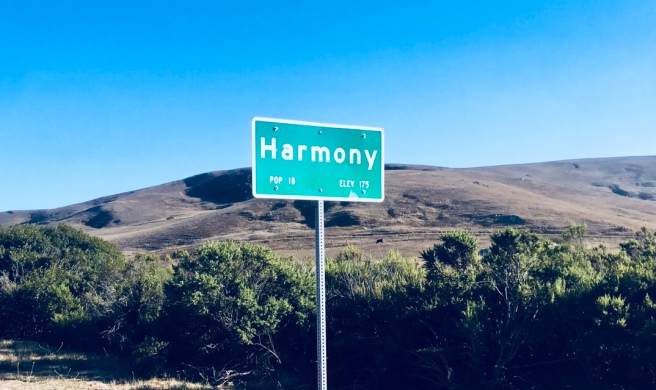 After a stop for deli dinner, groceries and shop cloths, I got to Morro Bay just after the sunset. The two hiker/biker sites were full, so I begged the two fellas that were in them to let me camp with them, too. After dinner, I ‘luxuriated’ in a long, hot, campground coin-operated shower, then retreated to my tent to plan for tomorrow. It’s slated to be an almost 74 mile day. Surely there is a way around that. Perhaps there’s a shortcut no one has yet discovered. 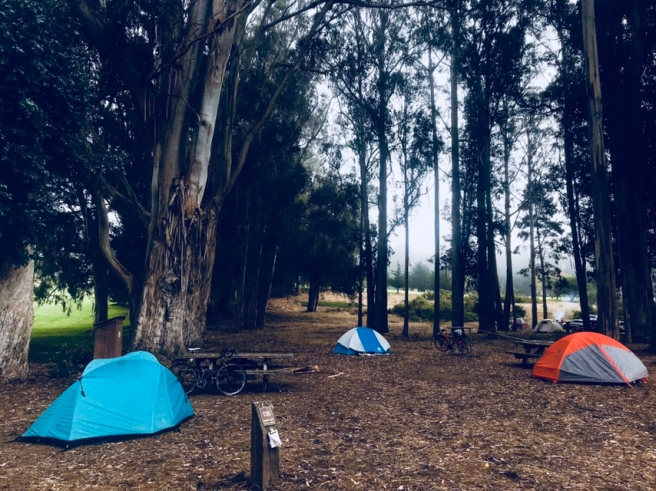