I forgot to mention one shop that caught my eye, last night, as I walked around town. I had to go back to the Mad Dog and Englishmen’s Bike Shop to see all the vintage looking new bikes and gear they had on display. Most of these bikes are eBikes, because it’s pretty darned hilly, around Carmel, and most rich folks aren’t going to use leg power to get up those hills. Some day, when I win the lottery, I’m going to buy my friend Lloyd Porter one of these. Wait, I don’t buy lottery tickets, so that will never happen. It’s the thought that counts, though, right Lloyd?

I love the surfboard rack on this one. Need one of those for my touring bike, for when I take it and my surf board to California some day.

These are Bromptons–the original British-made folding bike. The US made Bicycle Friday is actually a legitimate touring bike, so the shop owner told me. See? I’m learning new things on this trip.

Boy, I need to get one of these side cars to take the grandkids out riding.

And you can buy some of this recycled bicycle parts art, made by and Israeli artist, for a mere $2000ish per piece. If only I had a bigger house with room for another piece of art…and if only I wasn’t riding my bike for a few more hundred miles. These things were HEAVY. 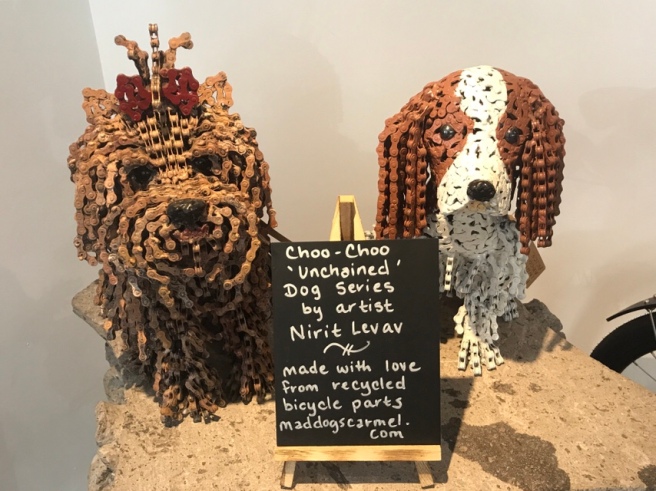 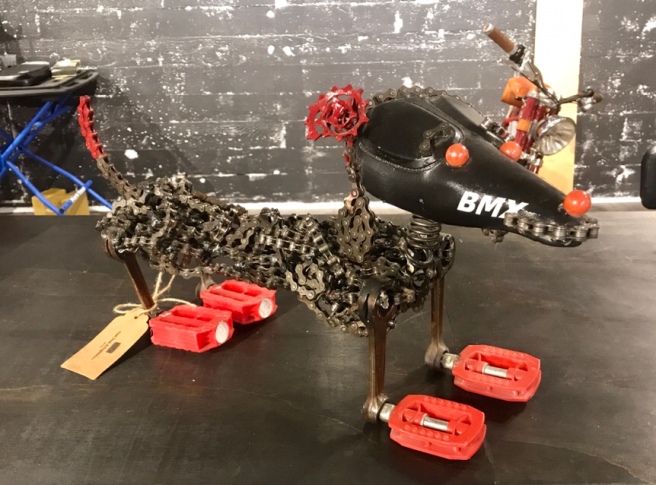 After enjoying that bike shop, I hit the road for a camping destination past Big Sur. The ocean was to my right, as always, and the spectacular scenery changed throughout the day. Let me just say that there is nothing like seeing this kind of scenery at 11 MPH. 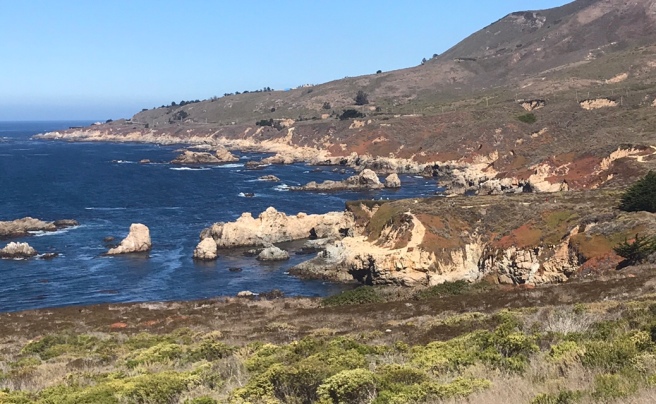 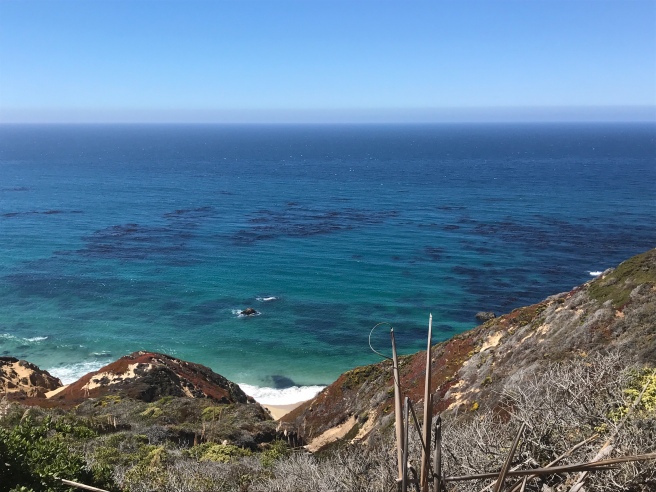 And then I passed Point Sur. When I saw it on a map, I expected some cool cliffs, but what I found was a lighthouse and Naval Facility. The lightstation has been in continuous operation since 1889, and is the only turn-of-the-century light station in California that is still open to the public—weekends only. The naval facility was established in 1957 as part of a worldwide network of listening stations that monitored the movement of Soviet submarines. One building of the facility is still used for sound surveillance, by the Navy, and is the only remaining listening operation on the West Coast. All the other buildings were transferred to he California State Parks back in 1980.

When I arrived Big Sur, hunger had set in. This hippie bus is the snack shop.

You know, the road to Big Sur was pretty climby, and I was tired, so for the rest of the day, I decided to relax and take it easy. At the Big Sur Visitor’s Center, I met up with Tonya and Natasha, a couple of adorable gals from Russia. We stopped and talked for a few minutes and traded photos. 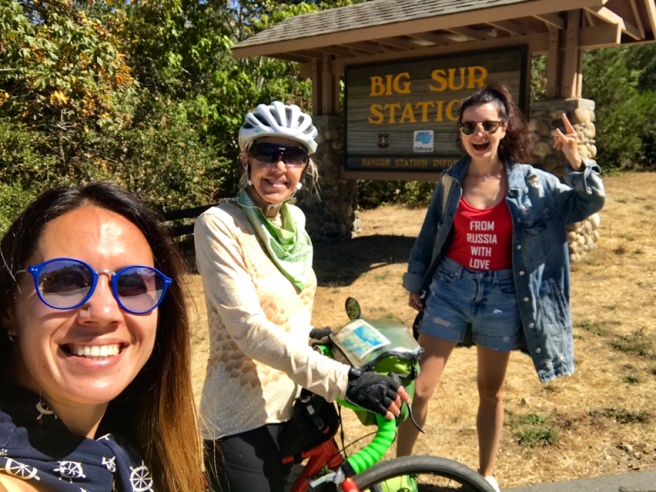 Then a little ways further down the road, I saw another fully loaded touring bike coming northbound, so I crossed over to talk to and shared M&Ms with Christopher, a Scottish fella. He started his tour in Buenos Aires, Argentina and has been on the road for over a year. The northbound riders face an almost continuous headwind, so they are few and far between, and are super tough.

Now I was looking for ANYTHING to stop for–like these horses who have the good life, living in a huge pasture next to the ocean. In honor of my daughter, I stopped to pet them. I hope someone puts sunscreen on the white one.

And when I saw this sign, I actually considered checking out the ‘Holy Granola’ and ‘Deep Books’, but when I turned in, there was another sign saying that it was 2 scenic miles away, and the road was heading uphill. No way. 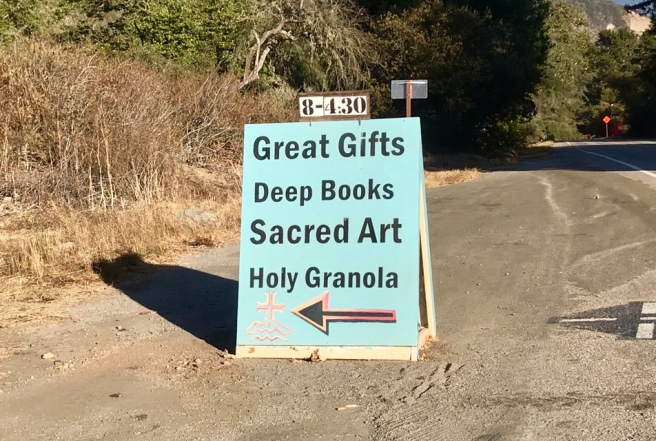 After passing through the massive landslide cleanup project, that closed Highway 1 for over a year, I went through this tunnel and found my way to my campsite in time to catch the tail end of the sunset. 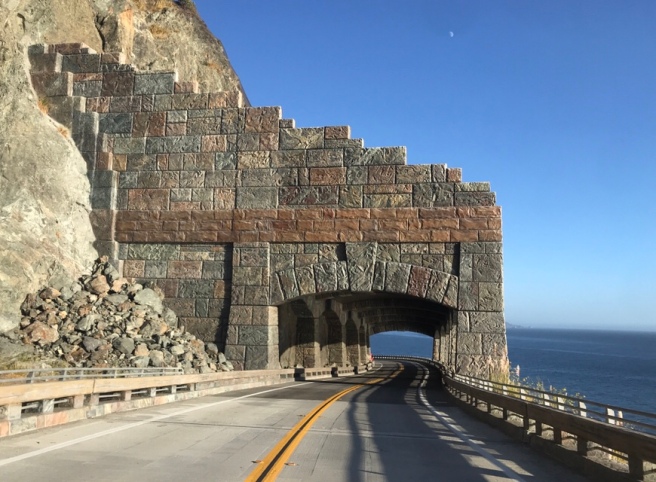 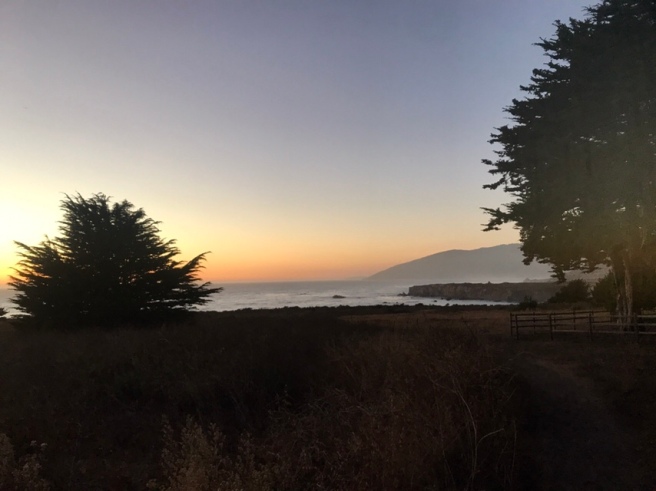 Check out this view of the ocean from my campsite. Amazing. And my neighbor, Madison, was also amazing. I smelled some kind of culinary creation going on somewhere in the campground, and when I asked her where she thought it was coming from, she fessed up that it was from her site. They had leftovers of sliced onions, zucchini, mushrooms and peppers cooked in truffle oil, butter and another secret ingredient, that they didn’t know what to do with. So she brought them over to me, and those veggies are the best food I have tasted on this trip. I thought I had died and gone to heaven. Thank you Madison. You made my day.