I had to get up extra early, this morning, to put out the group lunch and snack food for the day.  We go through about 3 loaves of bread, a package of cold cuts and another of cheese slices, a jar each of peanut butter and jelly, 11 bananas, a few pounds of other fruit, 3 packages of cookies, 1 package of crackers, possibly some nuts or trail mix, and a package of zip lock baggies.

So I put the food out on a counter, and within 10 minutes everyone had made their sandwiches and bagged up their snacks for the day.  All that was left to do was to wash 4 plastic knives from the shared cooking supplies, and I was off to our next stop–McDonalds for breakfast.

We don’t usually eat out for breakfast, but for some reason, Ken decided that was going to be the plan for the day.  The whole group took over half of the restaurant, and we gave the locals something to talk about.

So Ed, Tom R and I started our ride from the McDonalds parking lot, as the adjacent road is part of The Trail of the Mountain Spirits Scenic Byway, our route for the day.

After 6.5 miles of climbing, just before we made it to Pinos Altos, we reached the first of the day’s two crossings of the Continental Divide.  After posing for photos, we were about to hop back on our bikes, when Tom C, Erwin and Chris pulled up.  More photos ensued, then we all rode off together.

Sticking together for several hours, we were the biggest group riding together for the longest time since the tour began in San Diego.  We had a great time racing up and down hills, stopping for snacks and poking fun at each other. 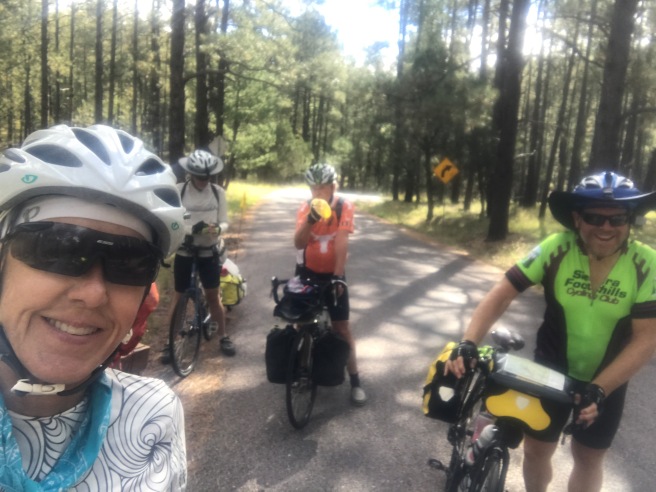 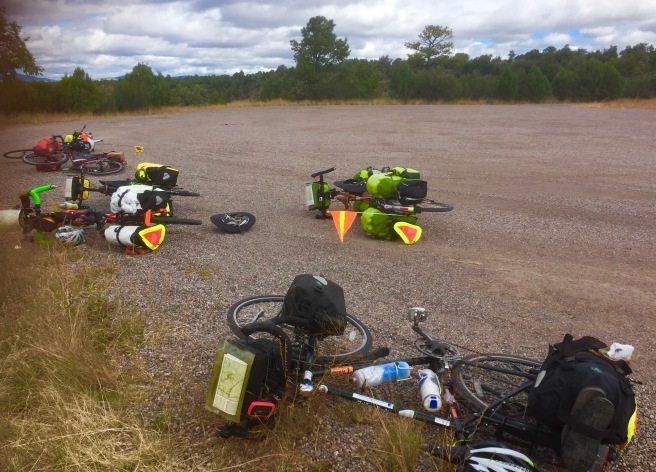 It wasn’t till we reached our one and only shot at ice cream and cold beverages that we started to split up and ride in smaller groups. 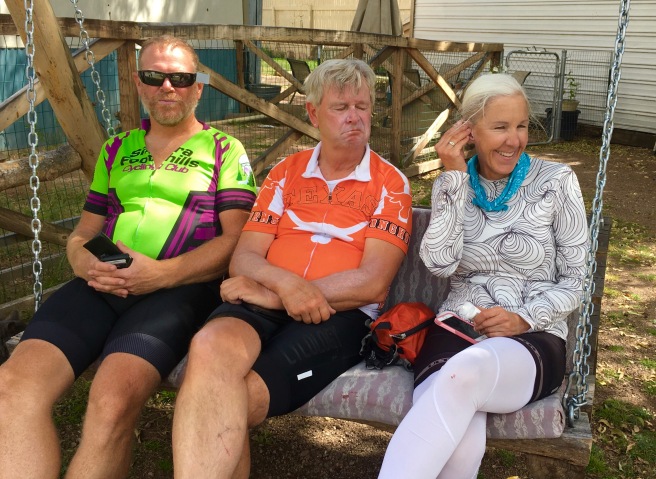 Eventually, all the guys sped up and left me in the dust, which was fine.  I like to ride my own ride, and keeping up with them wipes me out.

About two miles from the Mountain Spirit RV park, our destination for the night, I pulled off at the Mimbres Heritage Historical Site and spend a little over an hour checking out the exhibits and learning about the Mimbres Indian ruins and pottery found on the site in the early 1900s. 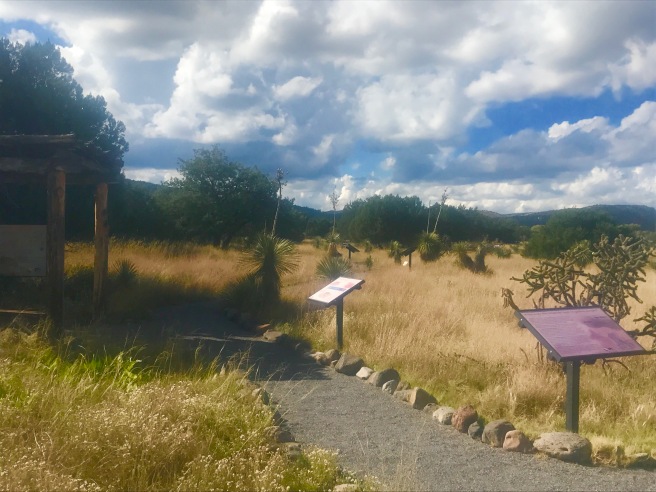 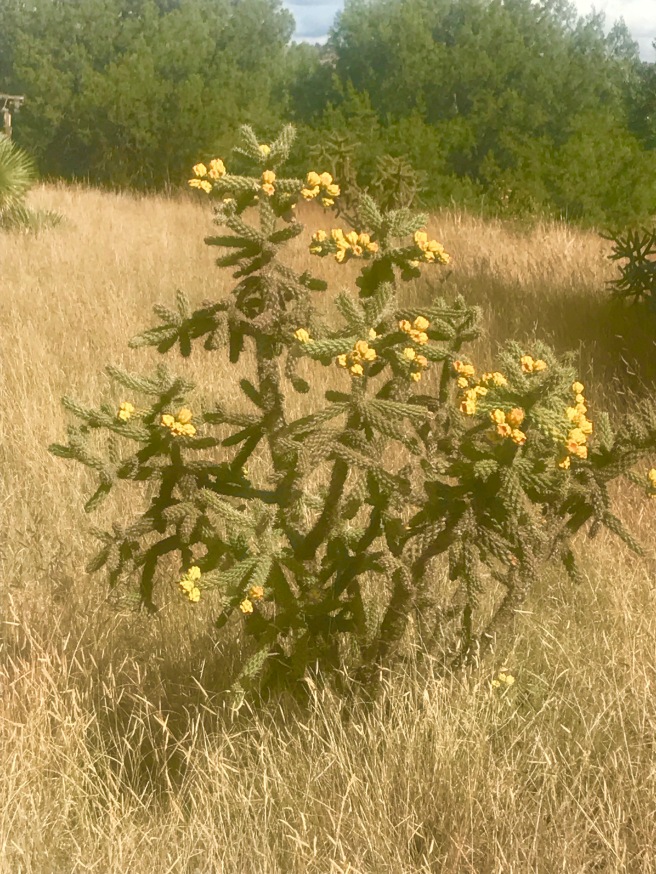 Cane Cholla at the Mimbres Heritage Historical Site
The Mimbranos (aka Mimbres Indians) lived on the site from 1000-1150 and had a unique pottery style with black on white images that tell a pretty complete story of their culture.  I had never heard of them before, but because of their pottery, they are supposedly one of the most popular prehistoric Indian tribes.  See?  I learned something new today.

As I rode alone, the last few miles to the RV park, one of my biggest fears became a reality.  A little white pickup truck with two men in it coming up the road in the oncoming land slowed down, and pulled over in a suspicious manner.  I was thinking I could potentially get rolled by the guys, have my bike loaded in the back, and who knows what would happen to me, so I looked straight ahead and kept riding.

As I watched the truck in my rear view mirror, it made a U-turn and slowly pulled up behind me.  Nervous, now, I kept riding as the truck slowly pulled up beside me.  Holy cow!  What was going to happen?  I looked off to the right and peddled harder.  Then I heard a voice, “Are you all right?”  It was Tom C from our group and the man who manages the RV park.  Whew!

Relieved, I hollered back that I had been at the historical site, which they should have been able to guess.  He said, “That’s what we thought,” and they drove off.  So I had the rest of my ride to think about all the things I do alone in life as a single female with no one worrying about me or even knowing what I am doing or where I am.  How do I survive without people to check up on me?  But almost all of these guys are married or widowers, who probably wouldn’t be comfortable if their wife was alone in unfamiliar territory.  I wish I had other options, but I don’t.  I’m stuck in my life.

Take a moment to look at the map that shows our two possible routes for the day.

We could have done the route that goes straight east from Silver City to San Lorenzo (3 members of the group did), but instead, we took the scenic route that goes north out of Silver City, then turns southeast before Lake Roberts to get to San Lorenzo.  Our route was twice as long with substantially more climbing, including two crossings of the Continental Divide.  And why did we do it?  (1) Because we heard that it has some of the best scenery of the entire ride across the US, and (2) because we are hard core.


The scenery was great!  We climbed from pinion and alligator juniper trees to tall pines, then back down again to follow the tree-lined Mimbres River as it passes through ranches and farmland.  We passed into and out of the Gila National Forest numerous times. 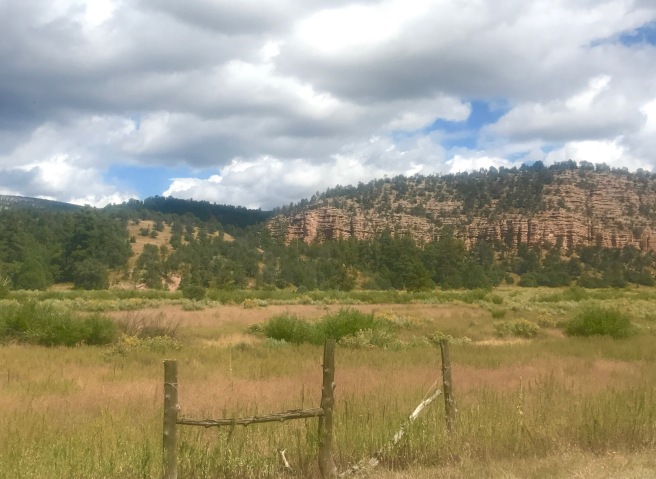 There were scenic vistas on all sides of us at times and hoodoos like you see in Bryce Canyon. 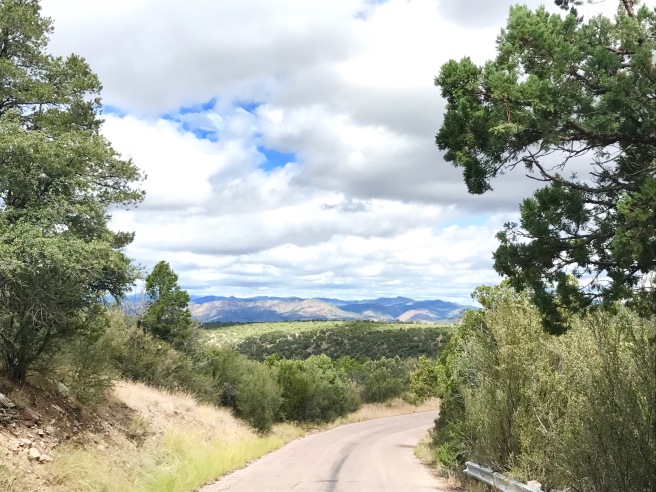 From start to finish,all of us who took our route agreed that it was totally worth the extra effort. 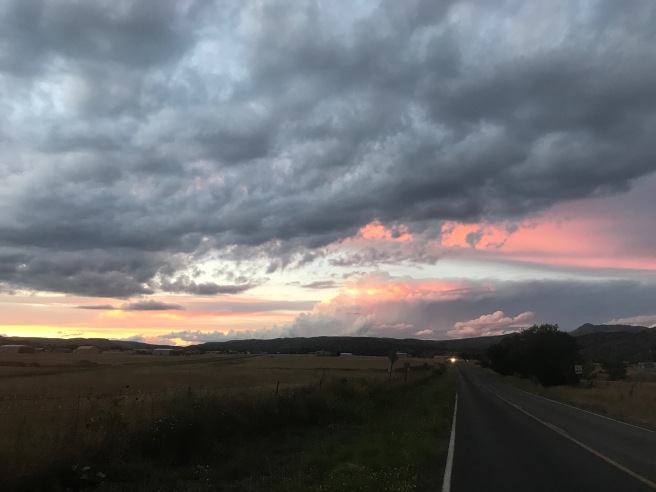 New Mexico sunset after we finished dinner
Tomorrow promises to be another challenging day as we climb the tallest peak of the entire trip. 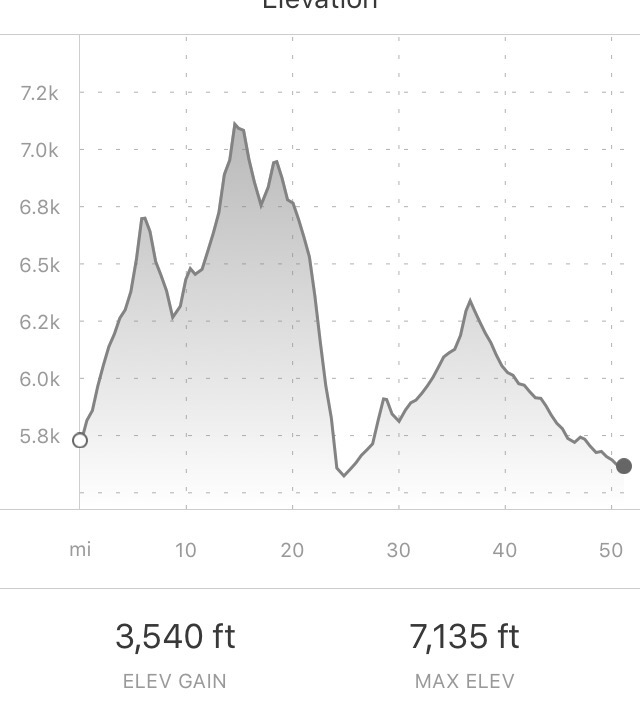