Today was our last day before hitting the road.  We met for an early breakfast and headed out on a ride to test our fully loaded bikes on steep hills and other terrain, so any needed repairs could be made before Tuesday and Wednesday’s climbs out of San Diego.

Riding from our hostel, we went straight to Dog Beach to dip our wheels in the Pacific Ocean and get a group photo.  The photographer forgot to get all of me in the photo.  What the heck!  She’s fired!

We then headed through town to Cabrillo National Monument and the Fort Rosencrans National Cemetary, with a route that put us on Hill Street, which is quite aptly named for being on an exceedingly steep hill. What the heck–again!  Only one of us had to stop and walk our bike up the hill–thankfully not me. The extra gearing Jay Stewart installed on my bike saved my day. Thanks Jay!

Between the city and the end of the road, where the Old Point Loma Lighthouse sits, is the Fort Rosencrans National Cemetary. Covering every bit of the land on both sides of the road–all the way down to the water around the peninsula, it is both a spectacutar and somber sight. Over 112,000 Servicement and some of their wives have been buried there, dating back to the Battle of San Pasqual in 1846 and the Spanish-American War of 1898. Its last burial spot was used up in 2014. Pretty cool, eh?

Three of us broke from the group to take photos of the cemetary. Me, the token female, Erwin, the token foreigner (he’s from Amsterdam), and Eric, the token young person (he is 22 and just graduated from college). Later, after we got back to the hostel, Erwin tried to round up a group to go to the beach, and guess who the only interested people were?

We rode our bikes 2.6 miles each way carrying boogie boards (try that on a bike sometime) to find the water unusually temperate and the ocean and beach relatively vacant. It was Erwin’s first attempt at boogie boarding, so we really enjoyed seeing him catch his first waves. 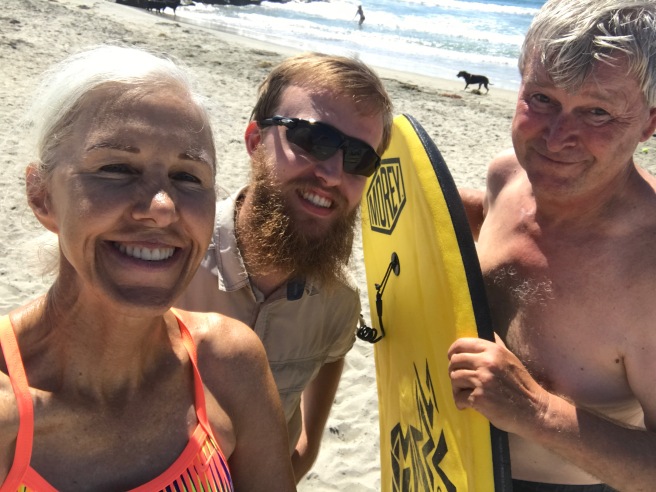 Today was like one last vacation before the ride begins, and we felt like we had earned it.