Have you ever noticed that things hardly ever go as planned?  I had a heads up that the section of route that passed through Camp Pendleton would be closed, due to a military exercise, and expected to be turned away at the point the route entered Camp Pendleton.  My plan was that at that point, I would have just crossed under the I-5, and ridden up an on ramp to ride on the freeway for 15 miles.  But that’s not how it went down.  The route took me through San Onofre State Beach and down a long road, adjacent to the freeway, that seemed to be used mainly by bikes.  All was well, when a rider, coming from the opposite direction, hollered out that the road was closed up ahead, and uniformed Marines were turning everyone around.  Hey.  This was the day I was going to San Diego.  I had purposely kept it to a short, 52 mile ride, and this was going to mess with that.  I had to backtrack 5 miles to get to my first I-5 on ramp, so I could again ride the 5 miles I had backtracked.  Grrrrr.  I-5 is a busy freeway, and I thought I was going to go deaf, just being out there riding.

At the first rest area, I pulled off to watch a helicopter haul equipment from a couple of aircraft carriers, out in the ocean, to land, where it was being loaded and taken to another location.  I’m pretty sure that was part of the military exercise, but who knows?  While that was going on, I met a couple, whose daughter is currently riding the Southern Tier route across the US as a tour leader for Bike the US for MS.  They told me a little about how it works, and a lot about how much she enjoyed riding with the organization, and I was instantly interested.  Something to look into later. 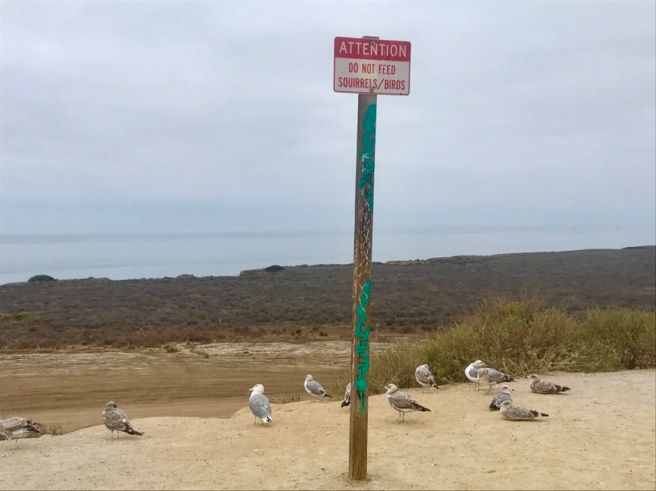 As many times as I have been there, I never knew that the first town after Camp Pendleton is Oceanside..  When I got off the I-5, there was a sign with an arrow pointing to the right to go to Camp Pendleton, and an arrow pointing to the left to go to Oceanside.  Pretty quickly, I was on The Strand–a nice bike/pedestrian pathway along the beach.  For the remainder of the day, most of the riding was either on a bike path or a wide shoulder. 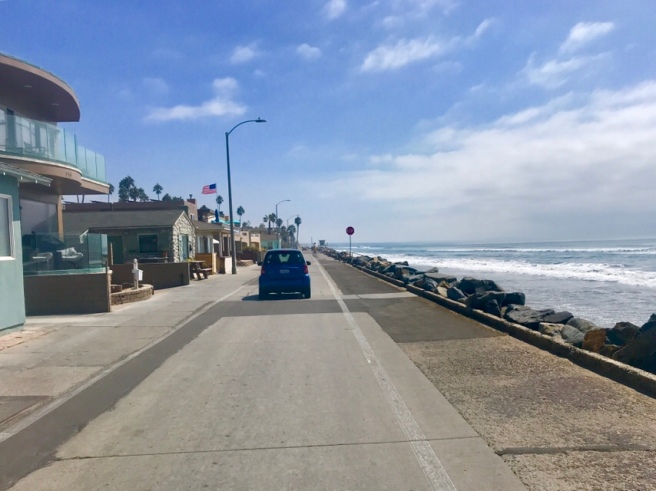 Another day of beach towns took me through Carlsbad, Encinitas, Solana Beach, Del Mar, La Jolla, and into Pacific Beach. 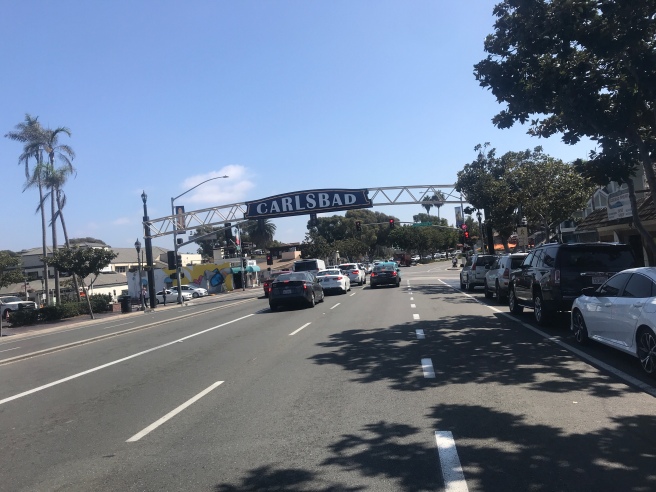 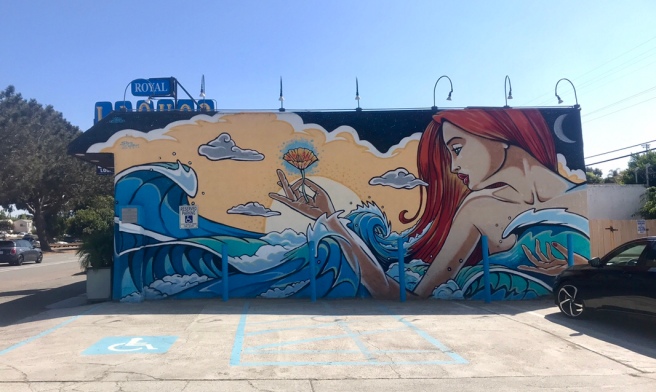 Encinitas had a couple of cool things going for it.  The first being my own personal boutique (pay attention to that name, Steve.)  The second being Swammi Point, a popular surfing spot, where a break in the ocean floor causes perfect surfing waves to form, and also a popular yoga spot, for you yogis out there. 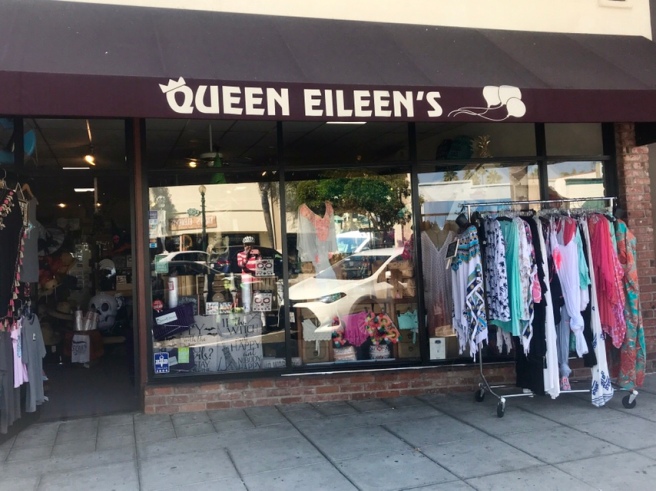 In Solana Beach, I really liked the life sized replica of the Breeder’s Cup Trophy.  I had to Google the trophy, through, because I was sure it couldn’t have a California flag on it, and I was right.  It is just plain bronze.  Not nearly as cool as the life size version.  After a stop to top of my tires and tighten my kickstand, I hit the road again. 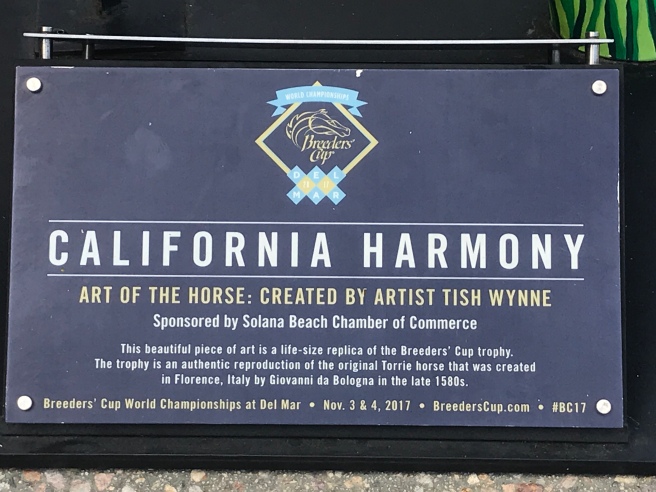 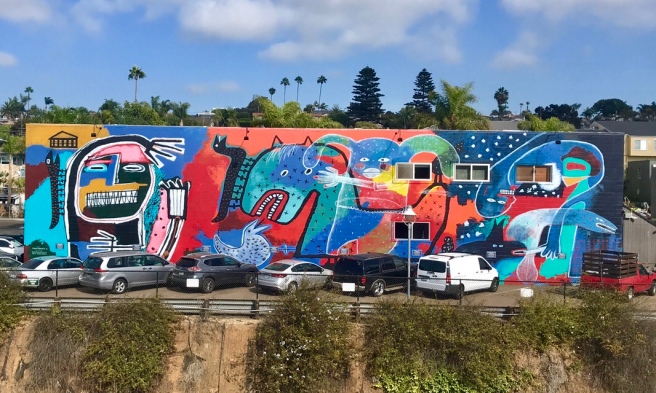 Around La Jolla is where I lost the cozy bike path and was turned back to the wolves, with crazy rush hour traffic on streets with no place for a bike.  Google Maps was taking me down alleys, to avoid traffic.  I decided to take my chances on street traffic to avoid being backed over by someone pulling out of their garage in a $100K sports car.  Wise decision, right?  Shortly, I arrived Lajolla Shores, a popular hangout for seals and sea lions.  I’m not sure which of them I was seeing and hearing bark, but they were cute little critters.

I had to keep pushing on to get to my hostel, so I didn’t make the stair climb down to the beach to see the whites of the eyes of those sea lions and seals.  I’m pretty sure they were okay with that.  At the hostel, I got a top bunk, which I always wanted when I was was a kid, but didn’t always get.  I can tell you that, as an adult who gets leg cramps and has to use the facilities, during the night, that top bunk is not nearly as fun as it seemed when I was a kid.

After settling into my zone at the hostel, I made my way to the beach to watch another spectacular sunset.  I’m going to miss all the sunsets I’ve been able to see, during this ride.  I ordered up a delicious Mexican food dinner at the cafe next door, then hit the local grocery store to pick up a few necessities.  You know, things like Gatorade for tomorrow’s ride and a pint of Ben & Jerry’s New York Super Fudge Chunk to celebrate the end of my tour on.  Turned in early to rest up for my big day tomorrow. 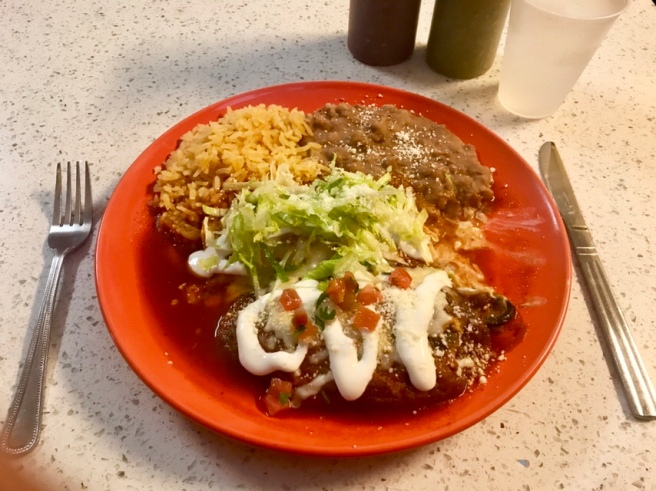 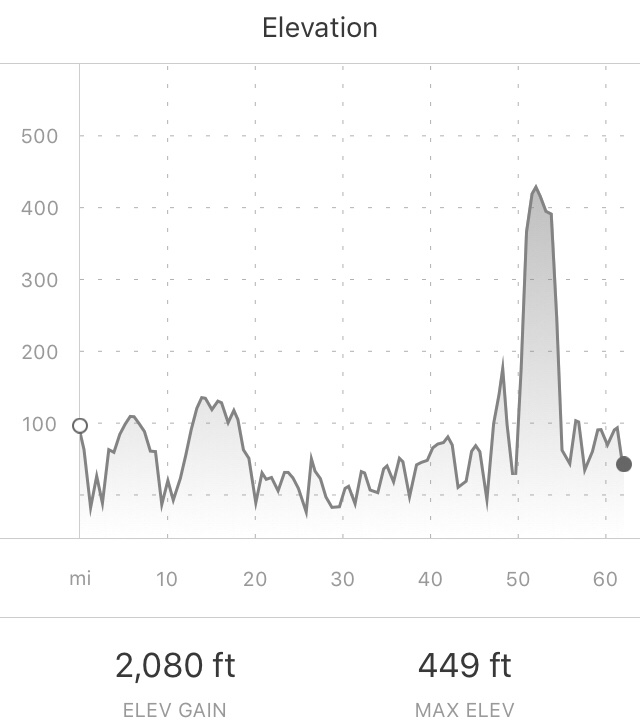