My favorite day of the ride so far! I will explain. Got an excellent night of rest, last night–on the floor of the RV Park rec center. Had a real bathroom to use during the night, cooked my oatmeal and hot cocoa in a kitchen with running water, so no stove or dirty dishes to deal with; then got moving early. The last of luxury–kind of.

As I was pulling out of the park, Rick, the owner, stopped me to tell me about the difficult climb at the beginning of my day. Thanks, Rick. Way to put a damper on my morning. (Not! I already knew about it.) He told me that it starts after the bridge leading out of town, and that there are bears on the bridge. What? I have no bear spray or whistle with me! 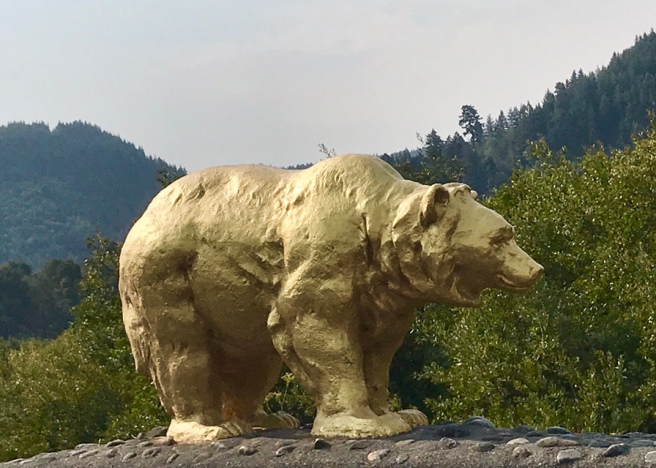 Taking this photo of the Klamath River, I looked down to see a couple of seals sharing a fish that one of them had just caught. They were so cute! And they were good sharers too.

Once across the river, I was in Redwoods State Park, surrounded by beauty. Did you know that Coast Redwoods used to grow many places in the northern hemisphere, but now, due to climate change, the only place in the world they grow is a 40-mile-wide swath of land that stretches from Southern Oregon to the south end of Monterey County, California. I’m riding in that swath of land. 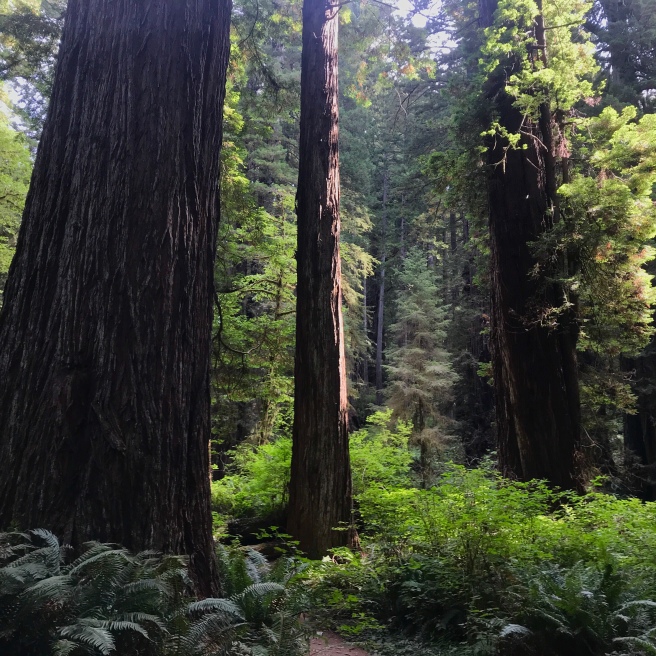 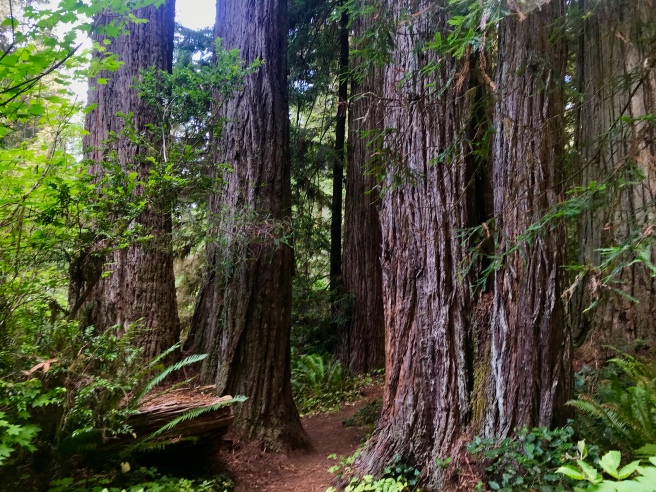 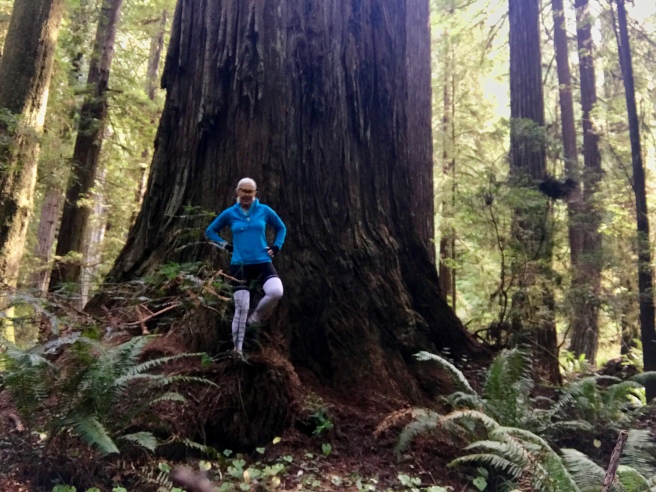 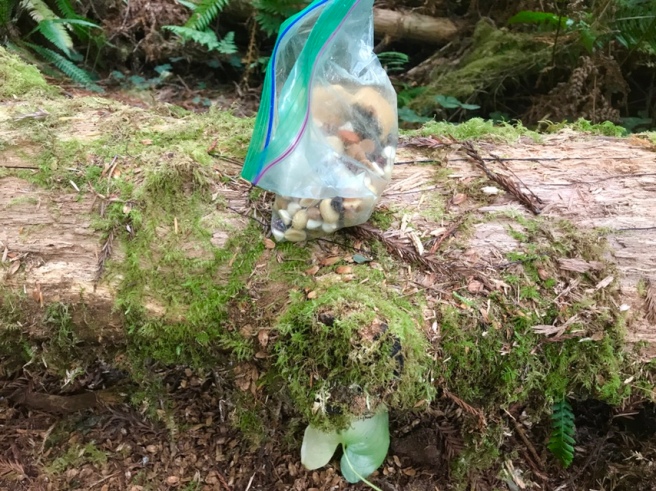 I just wanted to mention how polite the little critters are, in this forest. I set down my baggie of super delicious trail mix, to snap a photo, and forgot about it for about 10 minutes. When I went back for it, it was completely untouched. 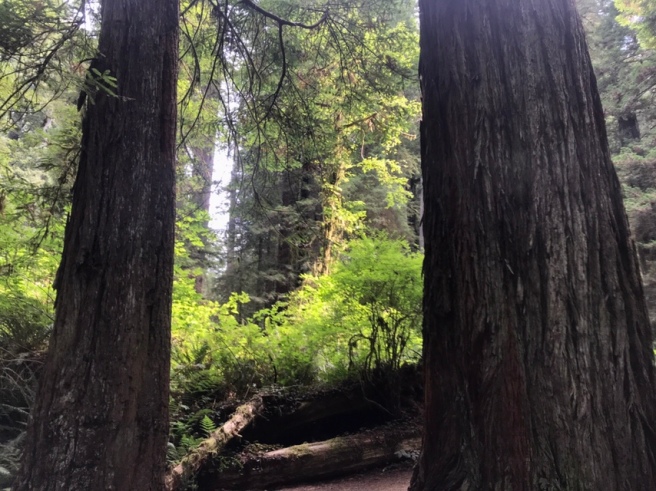 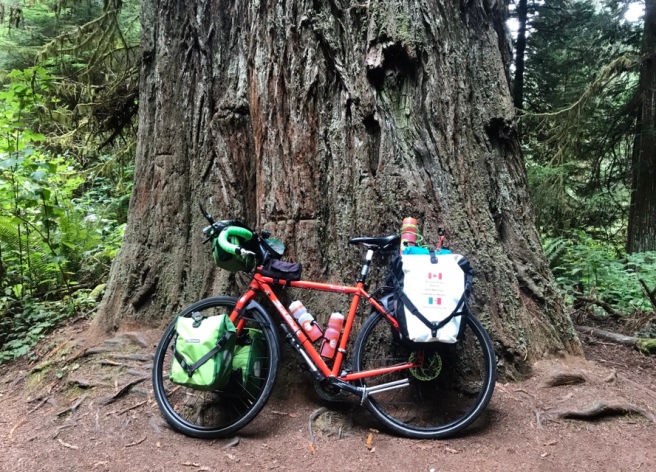 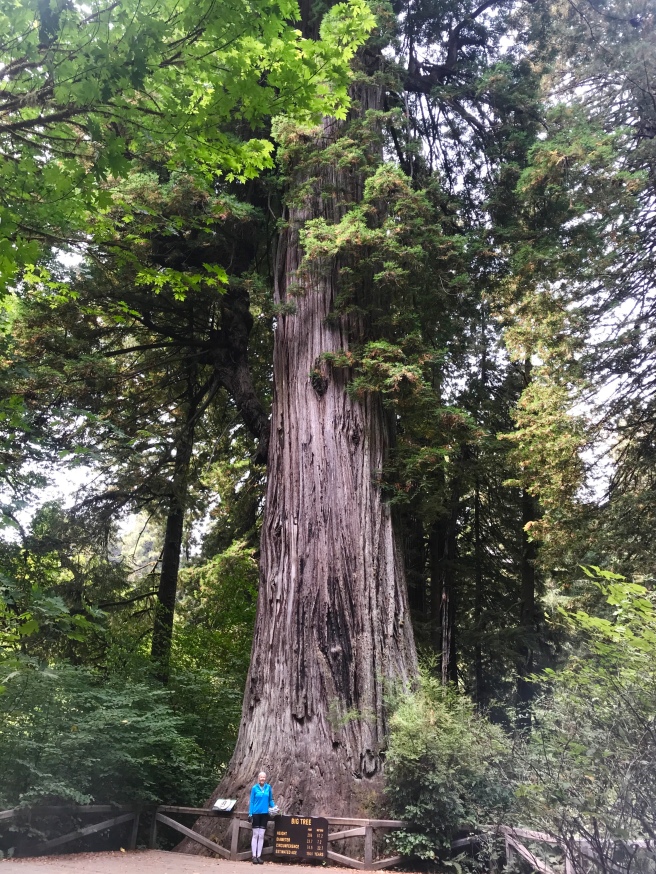 Ran into this herd of elk on the side of the road. 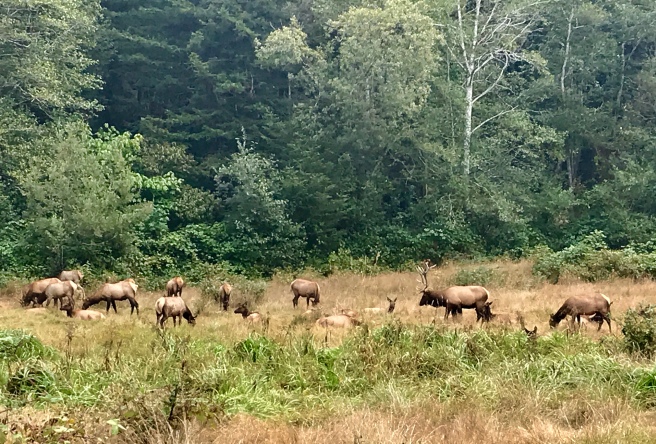 And then, the fog set in. Bummer. That kind of cool mist would be a treat, in Arizona, but it really cuts into your ability to see the scenery, when you’re a tourist on two wheels.

So I decided to take a break and try my first elk burger ever. It was delicious, but I’m not sure I could taste the meat over the onions, peppers, mushrooms and cheese it was slathered with. 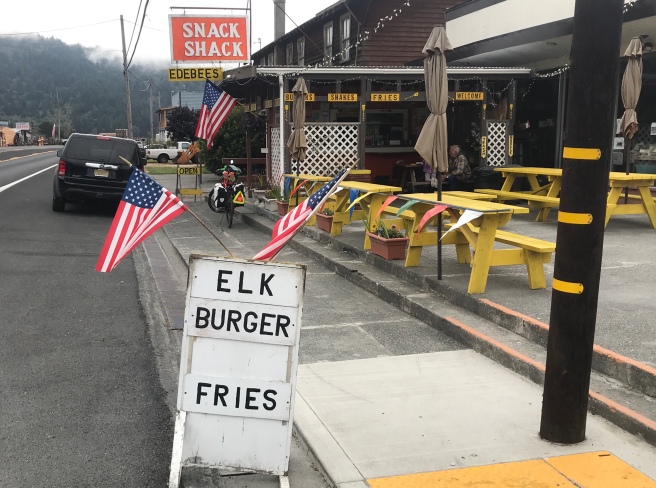 When the road took me back to the coastline, the mist cleared enough for more spectacular coastal scenery. You may have noticed that I never get tired of the rock formations. 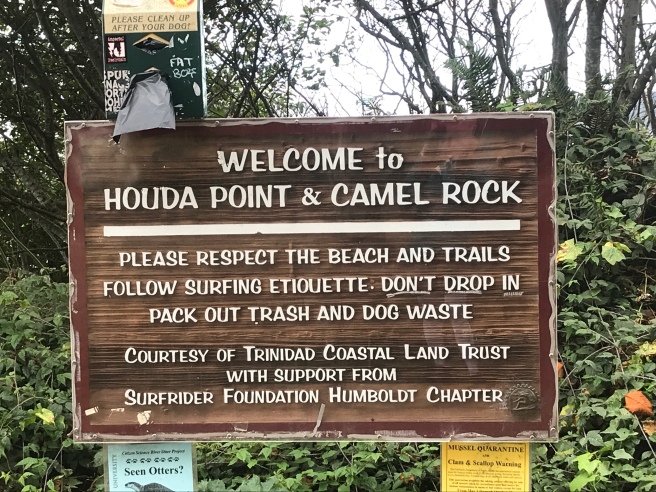 An obscure and rugged coastal road, led to an obscure coastal bike path. Somewhere, along the way, I met up with a couple named Will and Jennie, from Australia. They started their ride in Calgary, Canada, and are on a multi-month adventure that sounds amazing. Very inspirational! 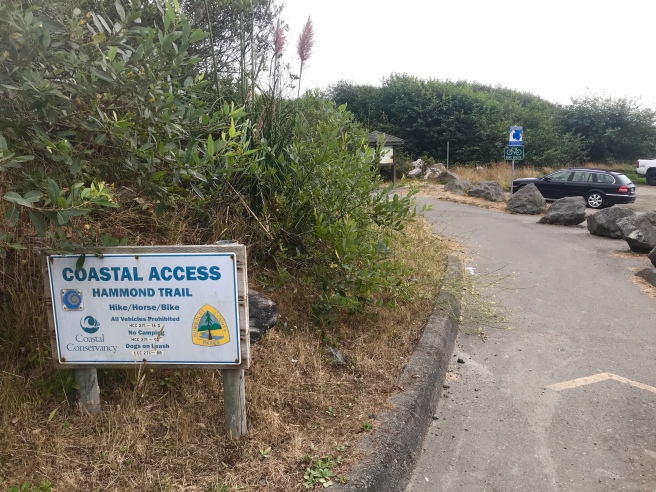 The bike path kept turning into gravel–steep gravel, so I found a spot to exit, and got on Highway 101, but in this part of the state, it is a limited access freeway, and at that time of day, the traffic was crazy. So I asked Google Maps for advice on how to get to my cheap motel for the night, and it routed me through about 10 miles of countryside, with happy herds of cattle and sheep, and one bison. 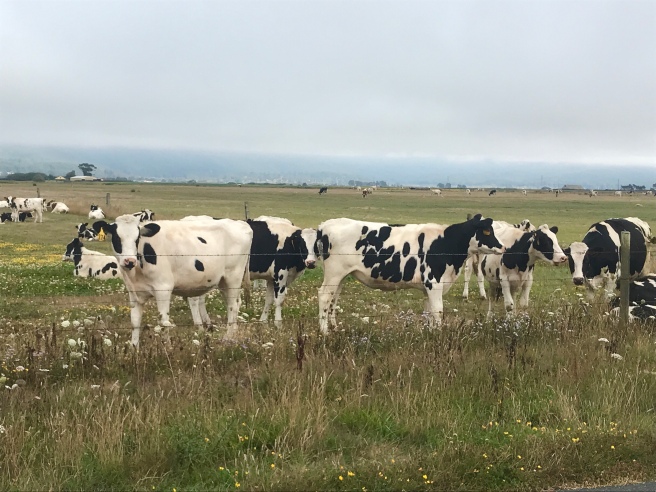 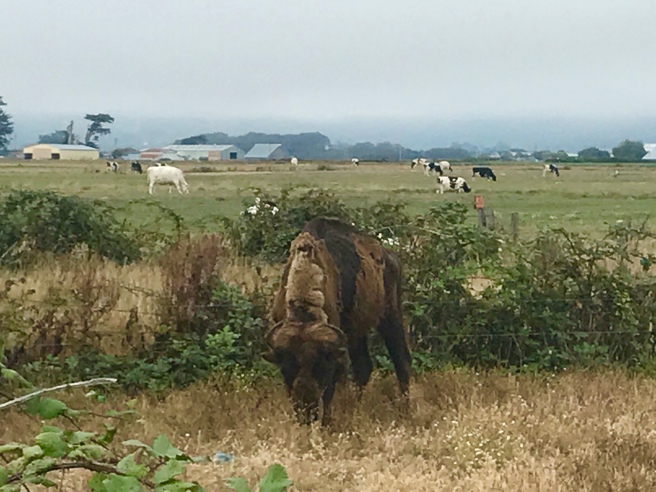 Finally, I got to Eureka, and what a cool little town it is. There is a huge section of the downtown area that is nothing but well restored Victorian houses from yonder years. 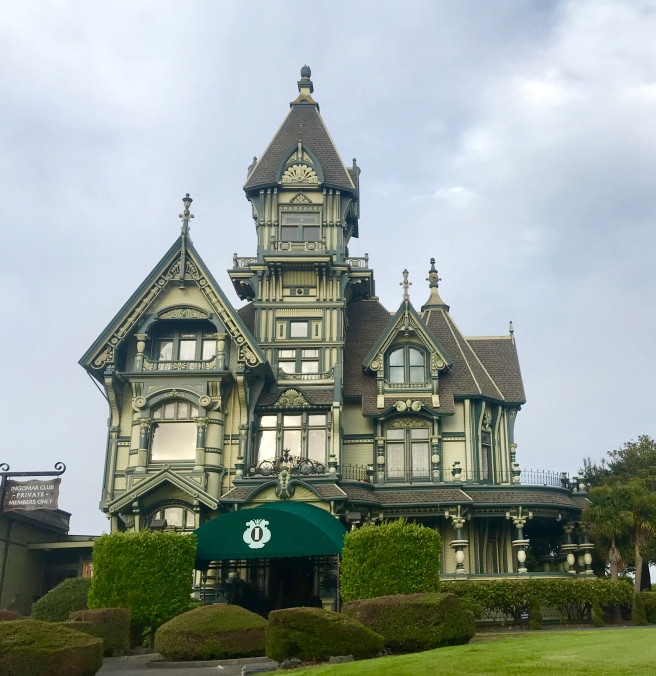 This house was built by a lumber baron, William Carsen, who also built the pink house across the street for his son. Why pink, Dad? Anyhow, the house is now a men’s club, with guards in navy blue suits posted to keep people off the property. I learned that when I tried to get a little closer to get a better photo. No police incident, thankfully.

The downtown has a lot of public art and murals–two things I really really enjoy. There was also a festival of some sort going on, with food trucks, and you know how I love food trucks. So I beelined to my motel to clean up, so wouldn’t look and smell like a freak of nature 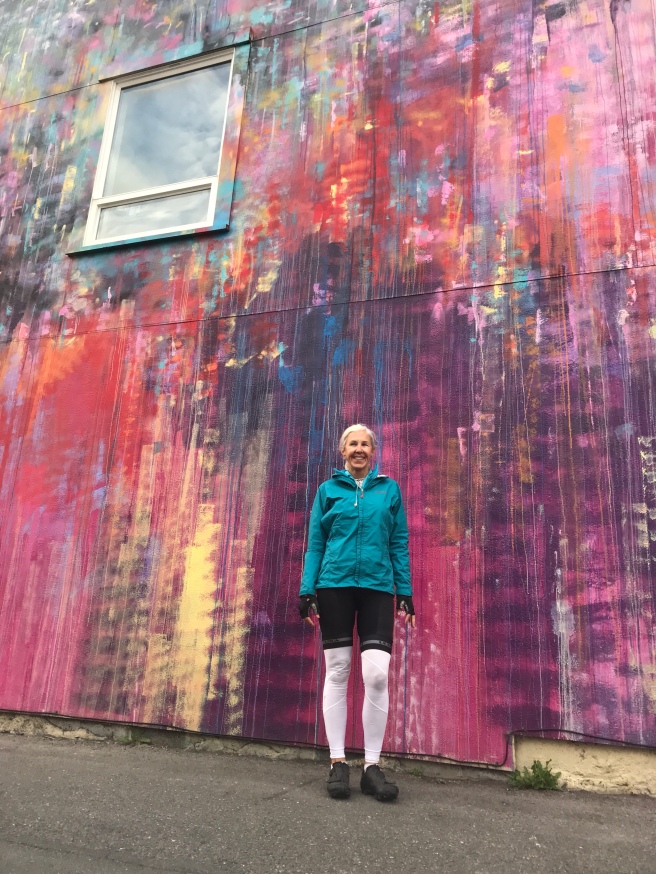 There was a long check-in line at the motel, but I wasn’t going to miss the sunset.

And when I got to the front of the line, the motel clerk was waiting for me. She pulled out–Da Da Da Daaaa–my new Garmin, an iPhone sent by Steve Moss, and a box of chocolate covered strawberries from ?????? (A secret admirer? Wait, only about 5 people even know my itinerary.)

And that wasn’t the only surprise at the front desk. Viktoria Hetzel, a young Russian/German gal I met a few days ago, was staying at the same motel, and the motel staff put us in adjacent rooms. It was great to see her again! She’s a beast on her bike, routinely riding 100+ miles per day. She had taken 1.5 days off, since I last saw her. 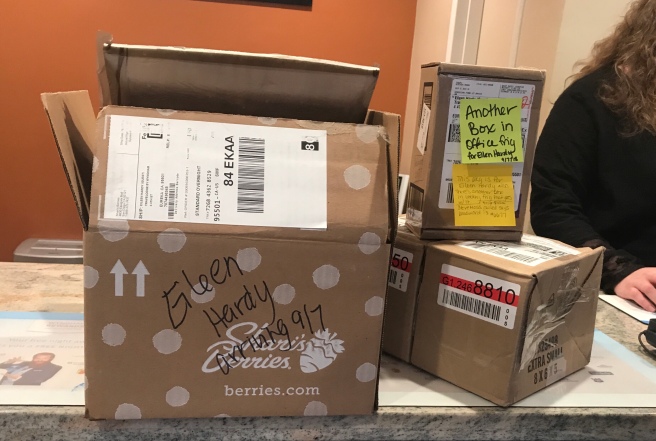 After I cleaned up, we headed downtown to check out that festival, but it was over. So we headed to a Co-op across the street from the motel, where Viktoria had already shopped for her dinner, and loaded up on deli food and chocolate milk. Then we headed back to the motel to share those strawberries, which were amazing!!! 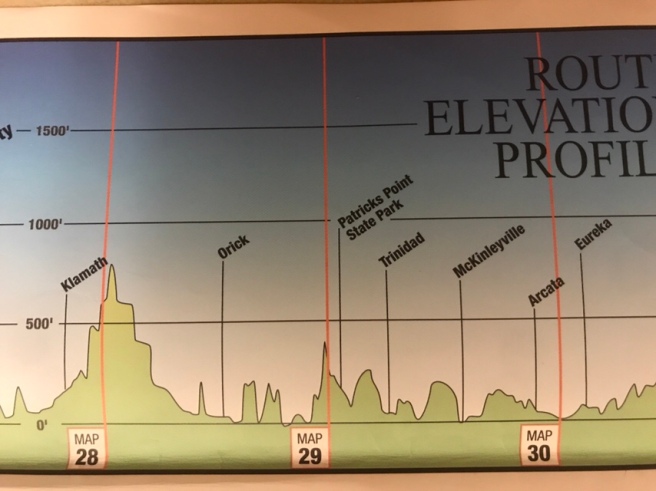