Today was a great day for the team, because it was one of the few days there actually was a team. The weather drove 4 of us together. It was cold, overcast, and there was a 15-20 mph headwind all day long.  Ed and I planned to ride together. Tom R lost his riding partner, yesterday, when Joe left the group, so I asked him to join us, and he did. And then, once we caught up to Neal, about 9 miles into the ride, we asked him if he would like to join us too, and he did.  Initially, it was all about survival, but later it was just plain fun riding together. 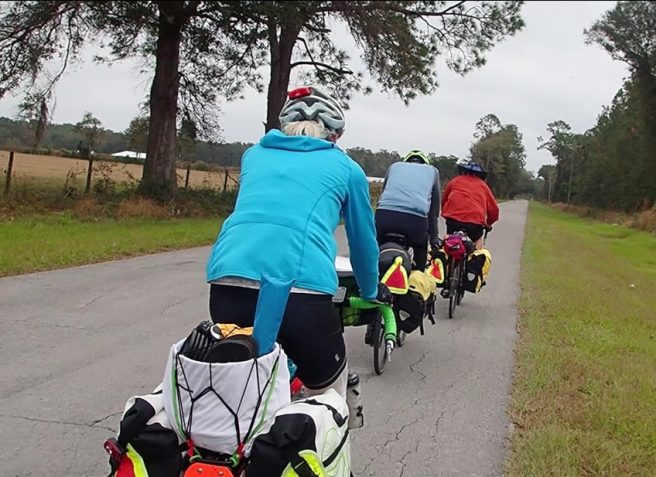 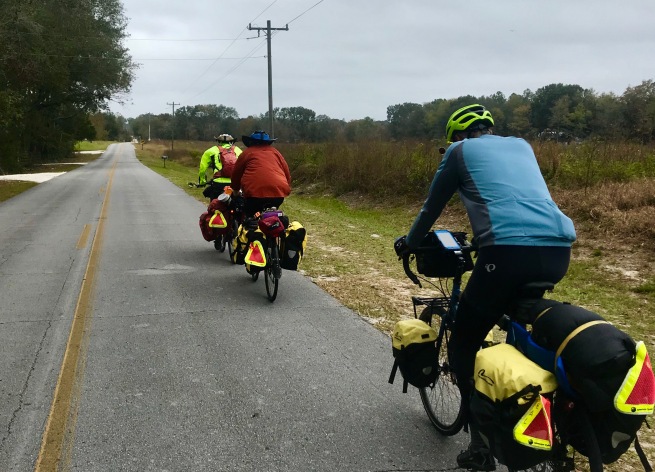 So the 4 of us rode together and took turns breaking the wind for a mile at a time, and by doing that, we only had to be beat up by the wind one mile out of 4, and the miles flew by.  Those windy miles would have otherwise been painful, let me tell you. At the end of the day, we smacked hands and announced in unison, “Best day of the ride”. 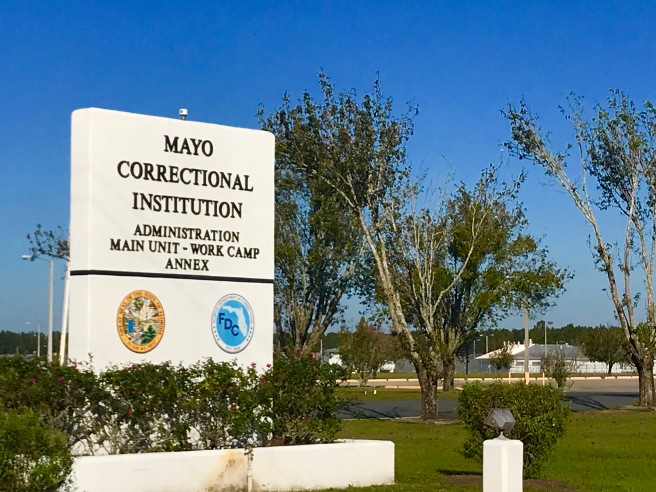 The ride took us past the local prison and into a town named Mayo, where we stopped at a convenience market for a snack. I can’t remember what I had for my official snack, but my unofficial snack was boiled peanuts. They have been for sale in the markets and roadside stands since Alabama, and I hadn’t tried them yet, so today was the day. 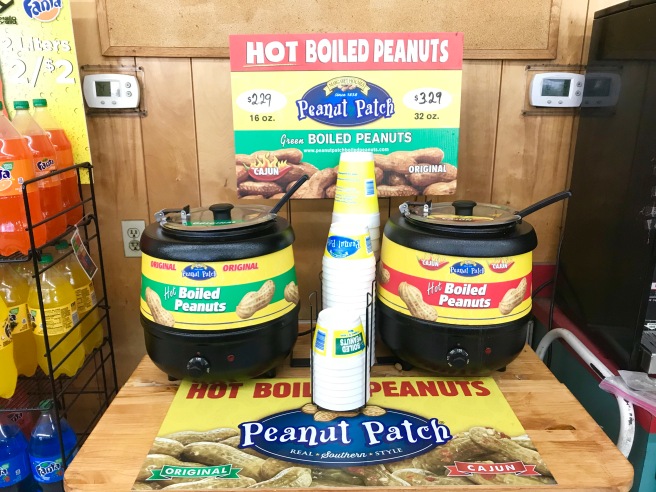 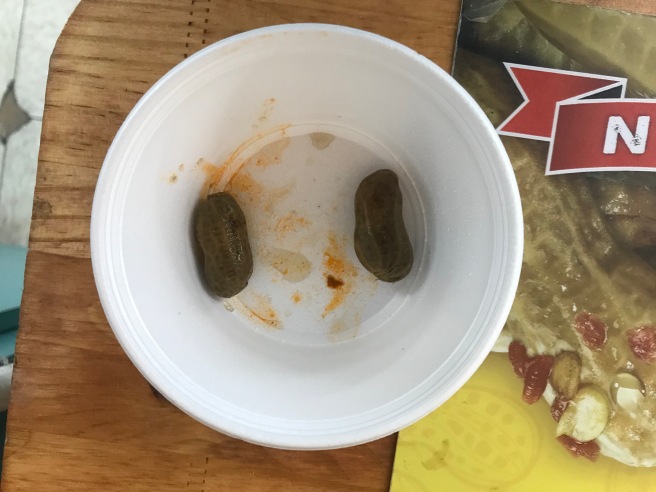 I asked the ladies at the counter how much it would cost me to sample the boiled peanuts, and they were so excited I wanted to try them, this was a freebie. One came over to train me on how you open the shell and squeeze the nut out, and she made sure I tried both the regular and Cajun peanuts. If you’re wondering what they tasted like, think salty pinto bean. They had the same consistency too.

About 5 miles later, we arrived at the city center of Mayo, and it was much more of a town than we previously thought.  I pulled over, because the only Veterans Day festivity we were going to see, today, was going on in front of the Lafayette County courthouse. 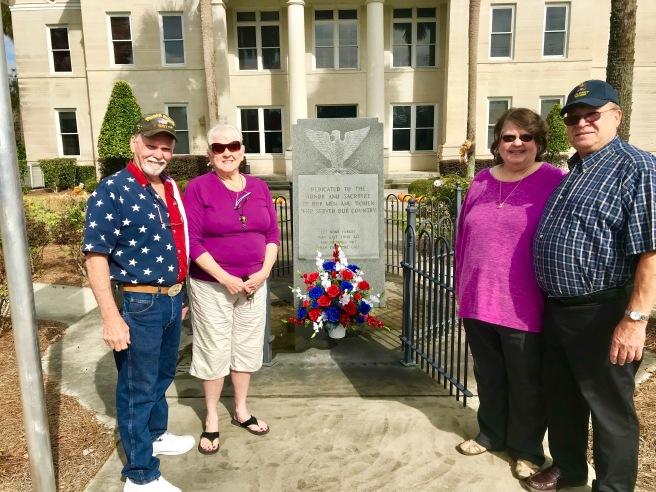 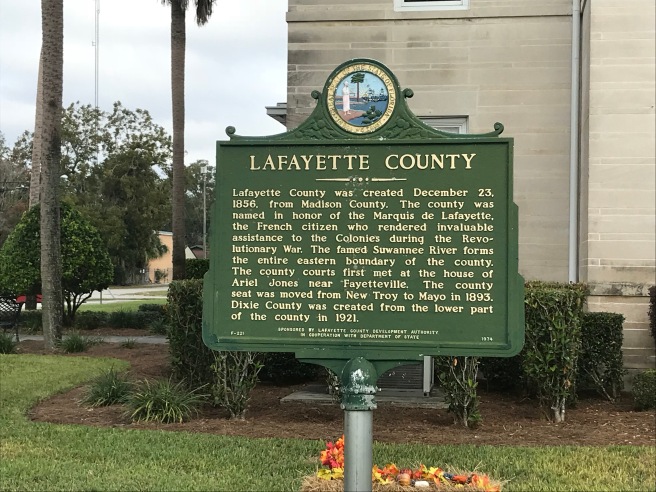 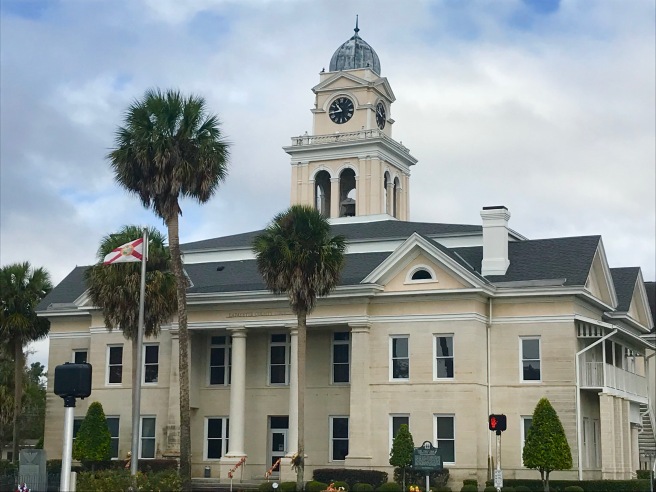 The “festivities” consisted of 3 Veterans, standing in front of the monument that is in front of the courthouse with some silk flowers, talking to other Veterans and people who stopped by between 8 and 11 AM.  As one who participates in and sometimes speaks at Veterans Day festivities, every year, it sure made me appreciate all the effort that goes into the Phoenix Veterans Day Parade and the various events held by other cities and in cemeteries around the Phoenix area.

While I was stopped at the Veterans Day “gathering”, I’ll call it, the 3 guys noticed 4 bikes we had passed just prior to the courthouse. They were parked in front of the Great Southern Biscuit Company.  We had to stop—again. 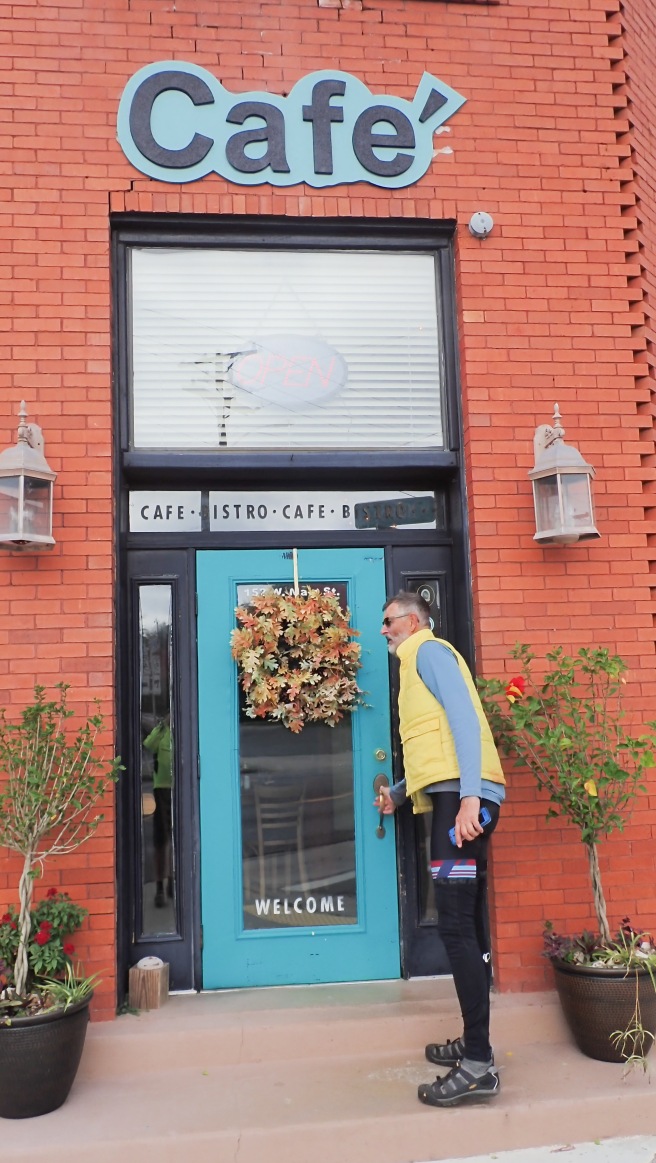 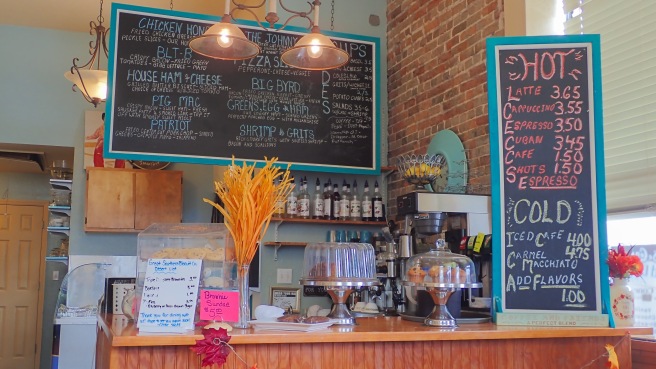 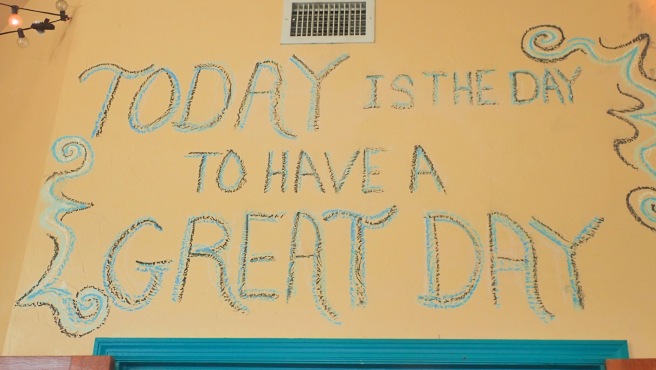 We had our second breakfast, and it was amazing.  When the waitress asked if she could bring us anything else, I told her to bring me the chef, so I could ask him how he made the eggs so fluffy and light.  He really knew how to cook!

Back on the road, we passed more interesting Mayo stuff.

A few hours later, when we arrived Branford, we were so wasted from fighting the headwinds, we stopped at yet another convenience store for an afternoon snack.  At this point, any excuse to stop would do. 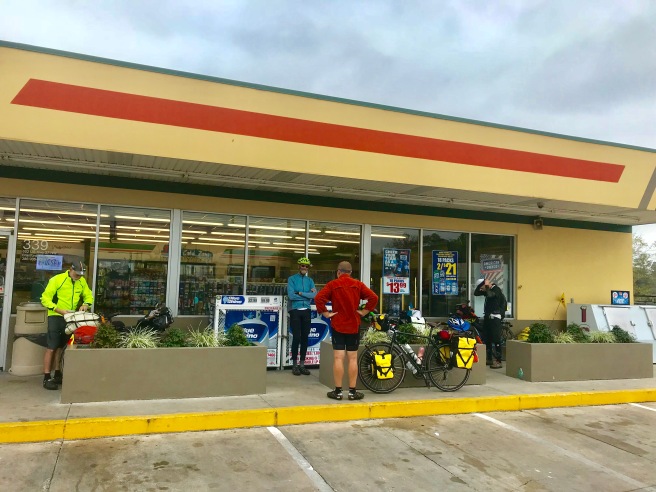 Finally, we arrived at Ichetucknee Family Canoe and Cabins. 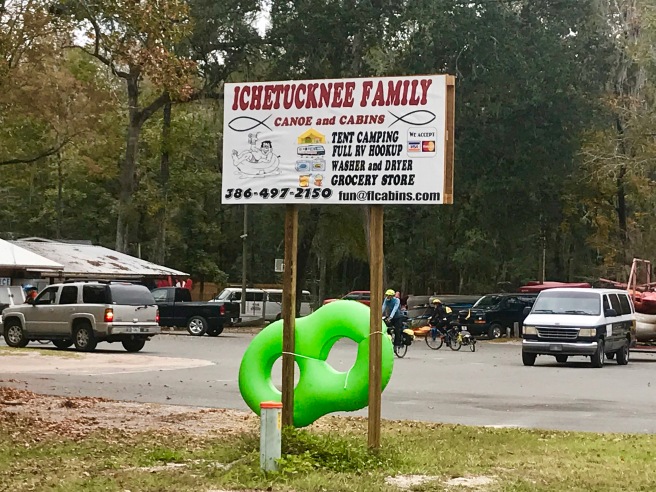 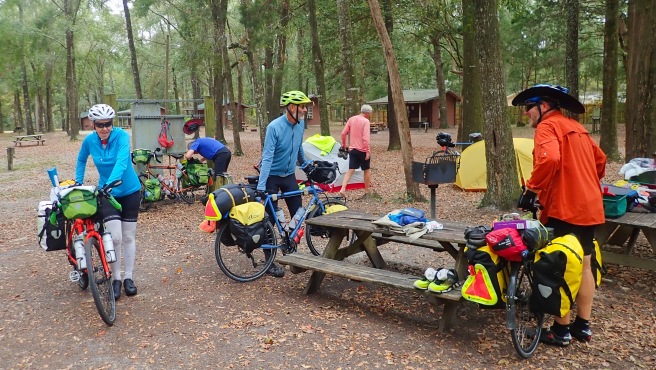 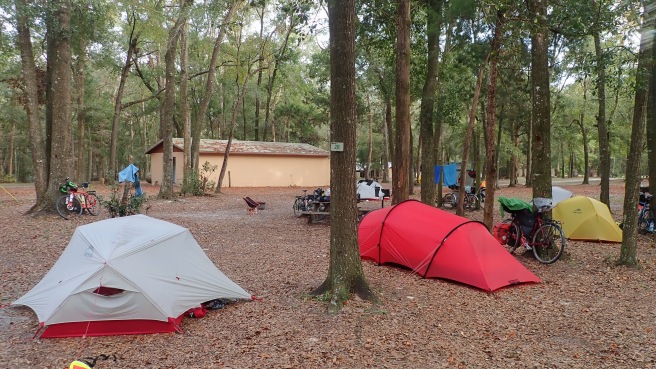 After setting up our tents, showering and winding down a bit, I went to the campground office to inquire about the state park across the street.  The lady at the counter told me about beautiful springs, perfectly clear 72 degree water, and a boardwalk that was within a 1/4 mile walk. Say no more. She had my attention.  I walked back and got the guys to walk over to Itchetucknee Springs State Park with me. 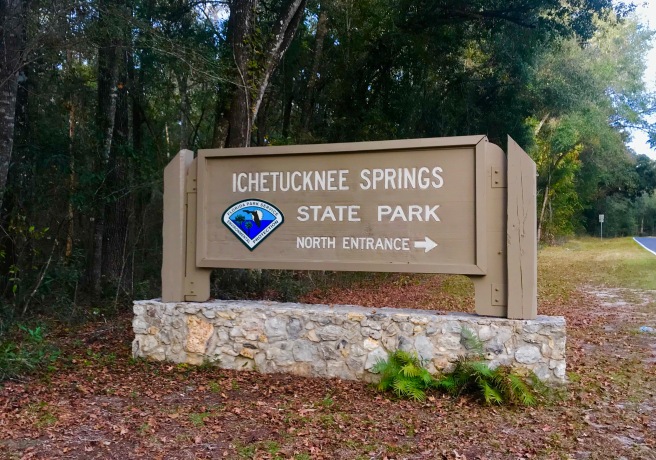 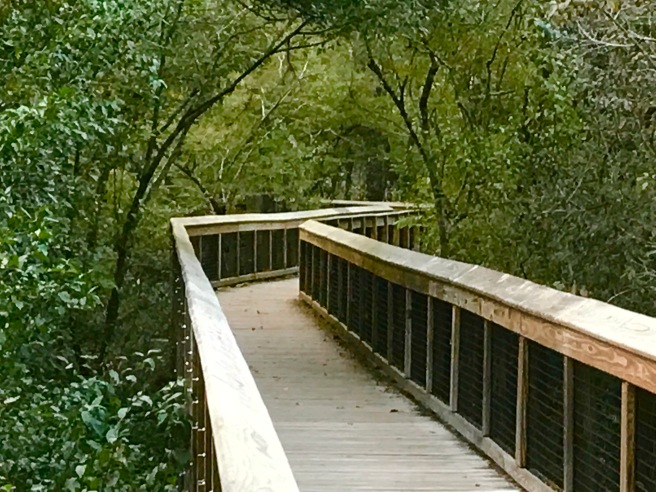 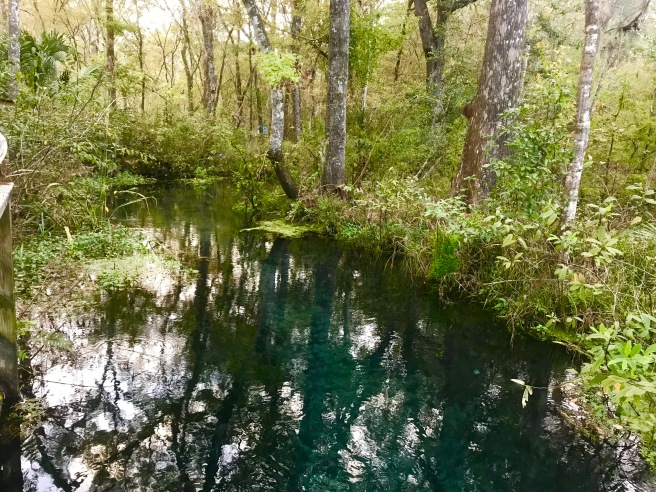 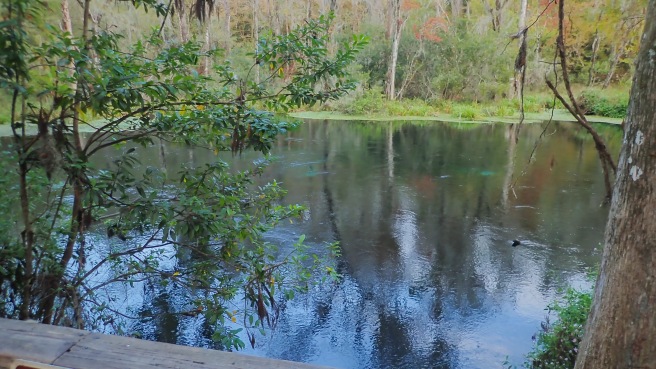 Wow!  We could not believe how beautiful the springs and pools of water at the Blue Hole and Headwaters were.  Tom C asked why we hadn’t gone over there a couple of hours earlier.  (Answer:  Because we were exhausted from a long hard ride.)

While we were at the park, we received a meaaage from Ken that our dinner had arrived the campground. A local chef brought us barbecued chicken and ribs, red beans and rice, and veggies. Neal and I raced over to the campground store for dessert, and due to no WiFi, we all turned in early.  You know, there’s something really nice about going to bed early.

Counting down, we only have 3 more days to go. 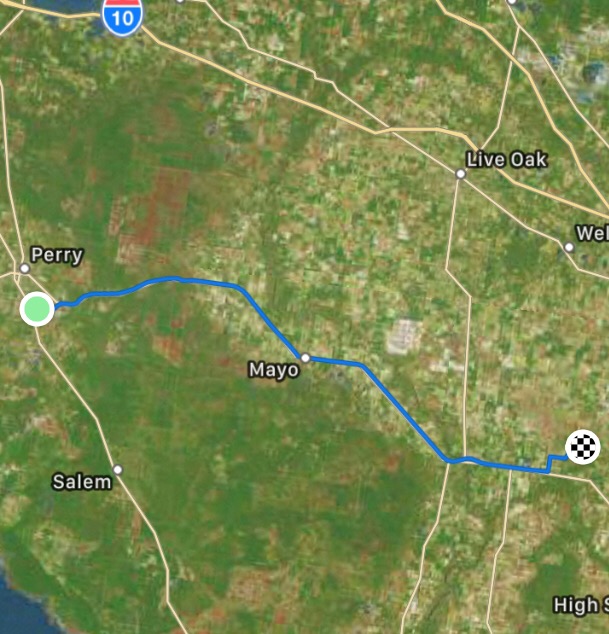 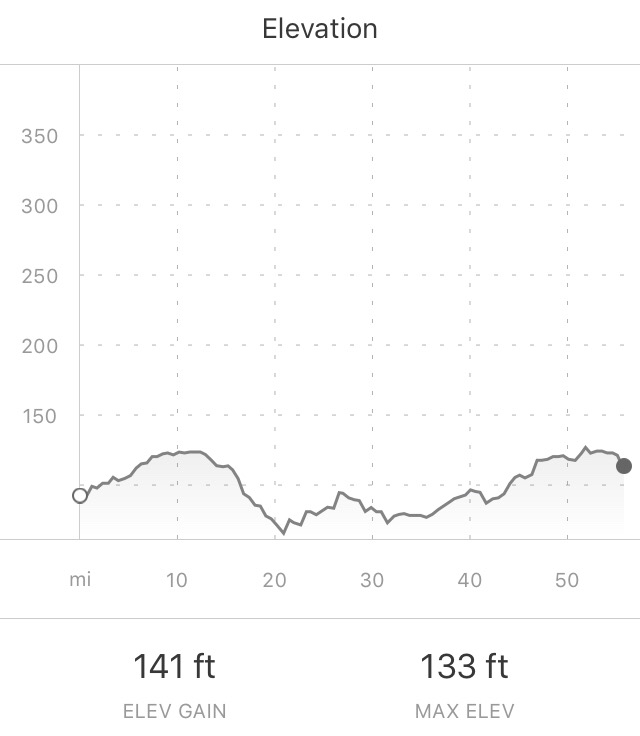