Sleep and keeping up with the blog are competing for this girl’s time, lately. I sit down after dinner to sort through photos, but start dozing off before the blogging even begins. So today, I had to catch up before leaving our cheap motel, which meant a late start on a 60 mile day.

Just outside of Panama City were miles and miles of Tyndall Air Force Base. There were signs and buildings for various military organizations and functions on both sides of the road, but my favorites were these. 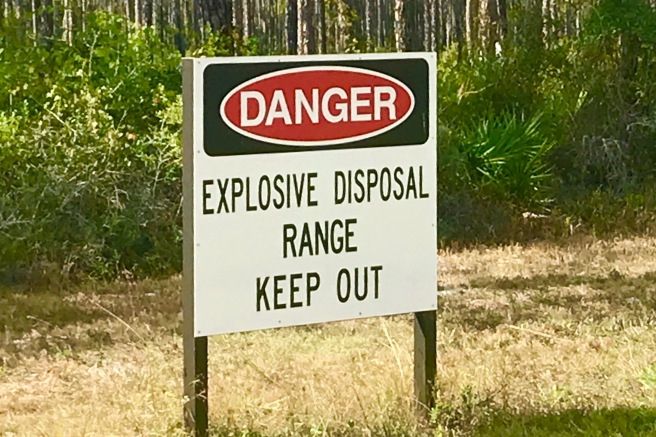 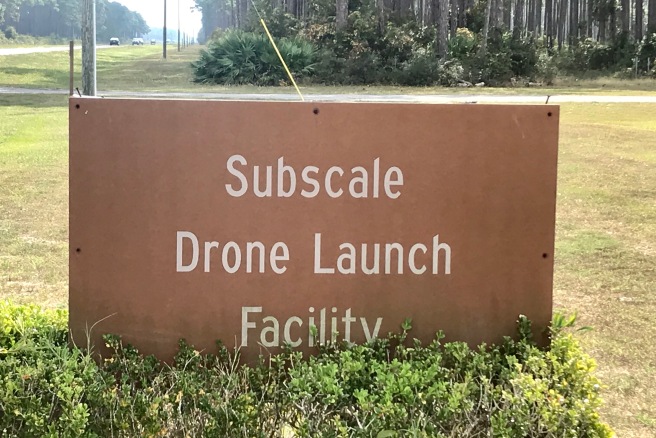 Do you even need the words “Keep Out” on that “Explosive Disposal Range” sign?  And I actually saw the drones before I saw the drone sign and pulled over to take a photo through the chain links fence (no signs were posted prohibiting it). 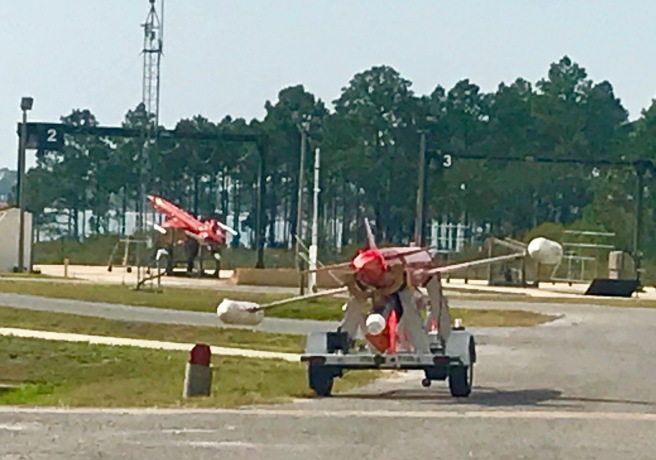 They are BQM-167 Skeeters, aerial target drones that are land-launched  from a rail system, using a rocket assisted takeoff, and recovered on land or sea using a parachute system. Pretty wild, eh?

I was standing there looking at 3 of the Air Force’s inventory of 37, when a loud jet engine sound started to ramp up from a hanger about 75 feet behind the closest drone in my photo. When it got really loud, there was a loud blast that instantly produced a bunch of smoke, and bam!  A drone blasted out of the smoke.  What are the chances of a person from Phoenix, Arizona stopping at a random facility on an obscure rural road at the exact moment a drone is launched by a rocket?
That stop wasn’t even on my radar for the day. My real objective was a swim and some lounging on Beacon Hill Beach, a stretch of pristine white sand with temperate ocean water in the town of Mexico Beach.  Like yestersay, there were no people on the beach, so changing into my swimsuit was possible by crouching down and ducking behind my bike.  Little did I know that just a few blocks down the road was a changing facility with a shower. But I’m hard core.  Finding and using that would have been too easy for me. Lol. 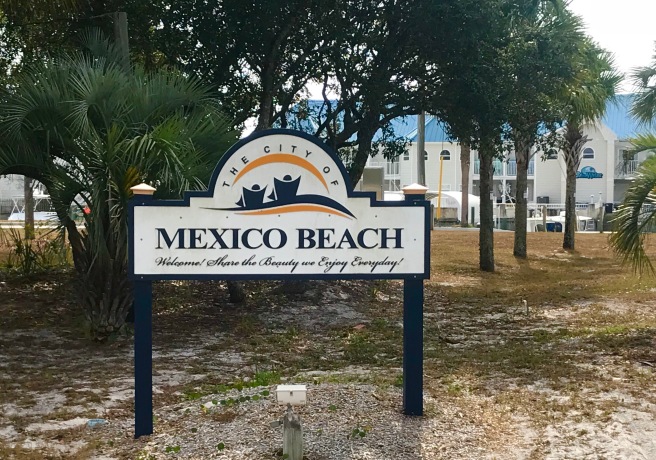 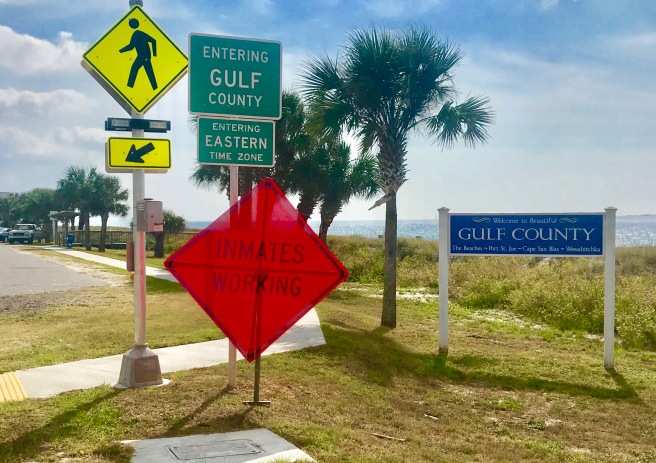 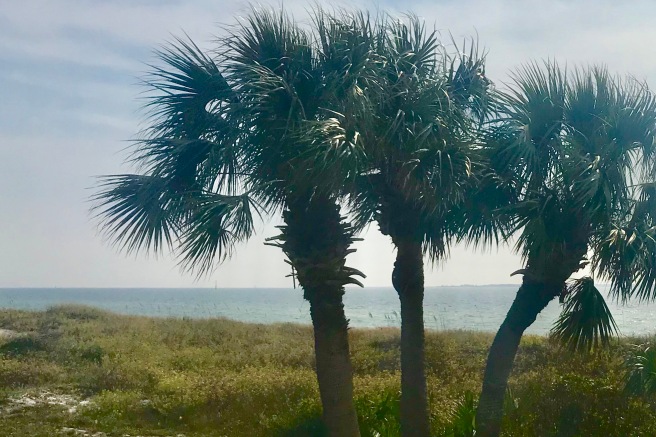 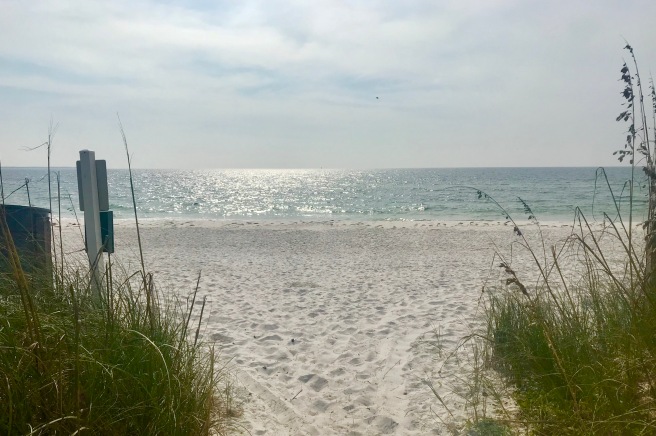 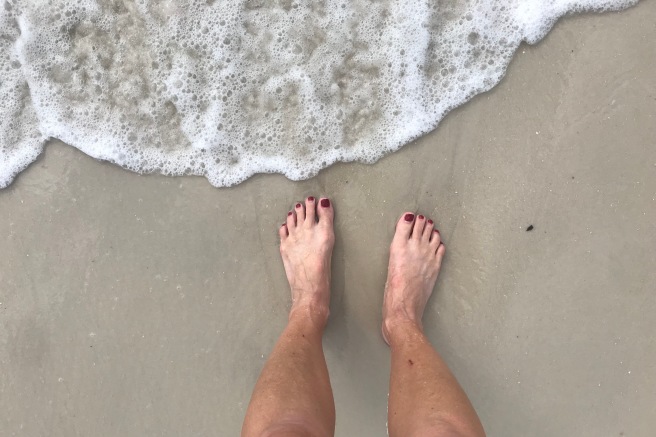 Did you catch the Eastern Time Zone sign?  We’re in it now. And what about the Inmates Working sign?  Yep. They were working on the landscape along the road as I changed my clothes on the beach.
I swam and sat on the beach for almost 2 hours, then got back on the road. There was no way I was going to risk riding in the dark again.

No sooner had I started riding again, when I came across the Beacon Hill Veteran’s Memorial Park.  I pulled in to look see the monument, and instead found one of the men who has been instrumental in building the park. They don’t have a monument yet, but they’re working on it. Right now, the park is the monument. 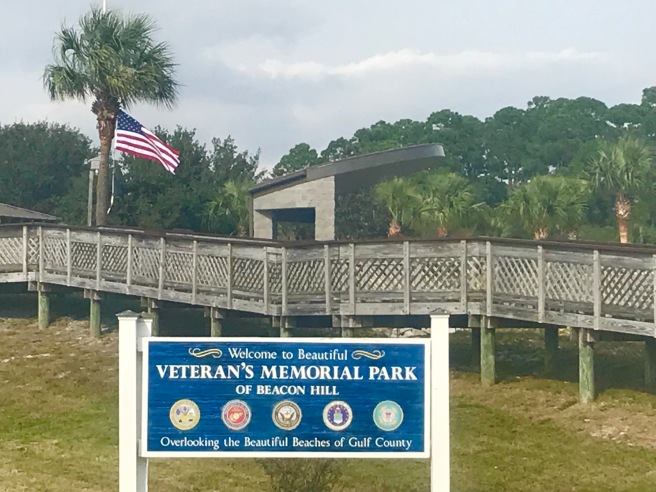 Today’s route was generally scenic, flat and easy, passing thru two types of terrain:  along the beach or on pine tree lines roads.  After all the miles I have covered, over the past 2 months, an easy day, every once in a while, is appreciated. 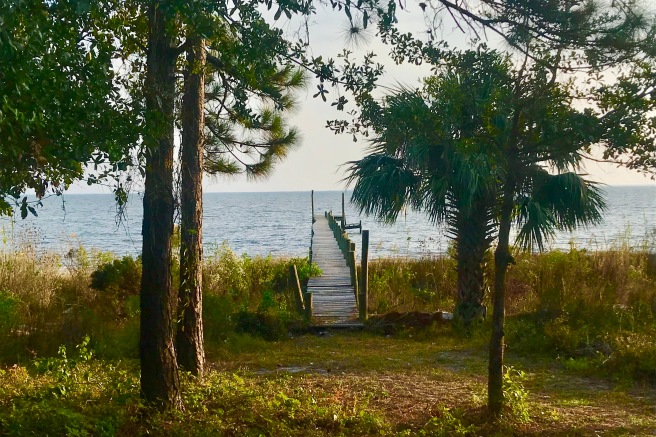 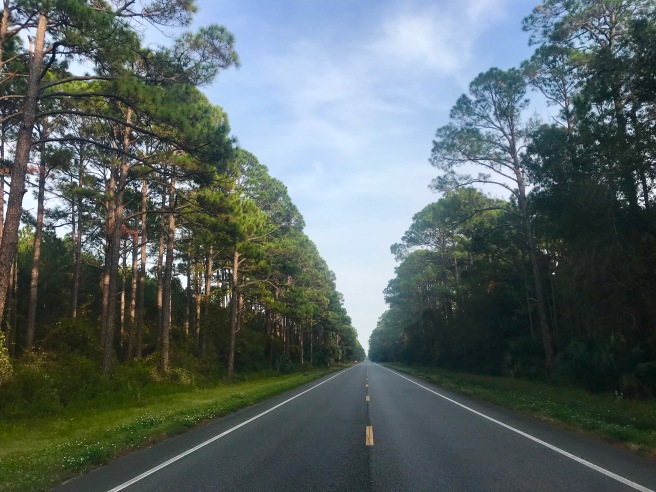 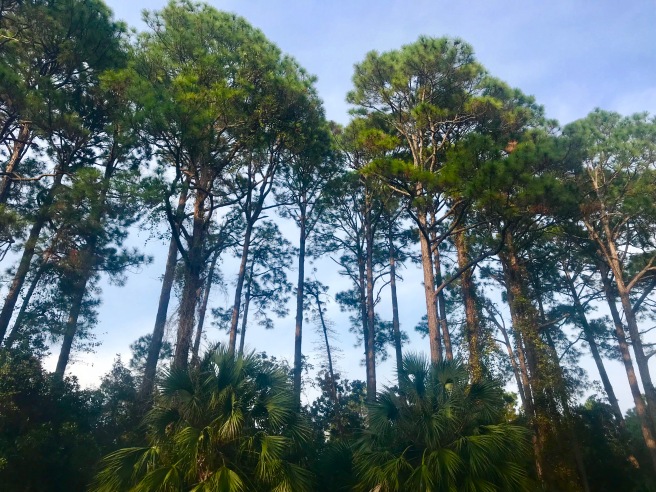 The signs leading into Apalachicola mentioned a Three Man Detail Monument in town, and I arrived town with enough time to ride out to see what that meant.  The bronze sculpture was installed in 2008 to honor Floridians who served in Vietnam and is made from the same mold as the sculpture in front of The Vietnam War Memorial in Washington D.C.  Being alone there in that memorial park with the sculpture of the three infantrymen was very moving—a quiet moment that would never be possible at the original sculpture in Washington D.C. 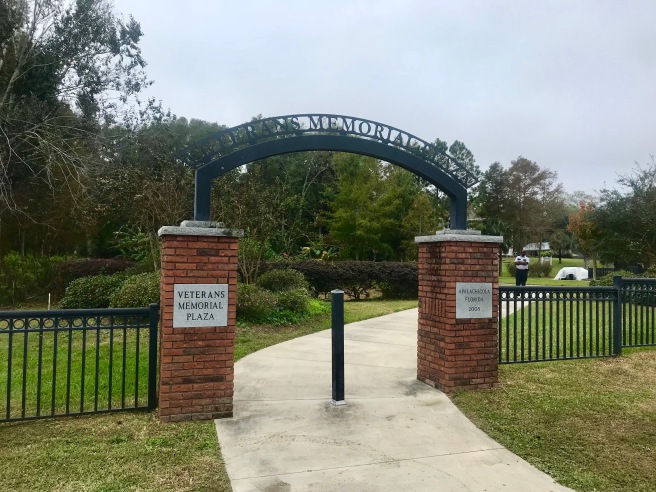 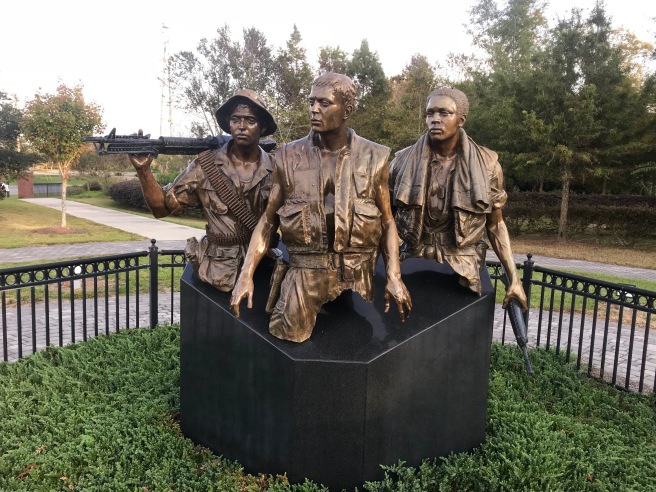 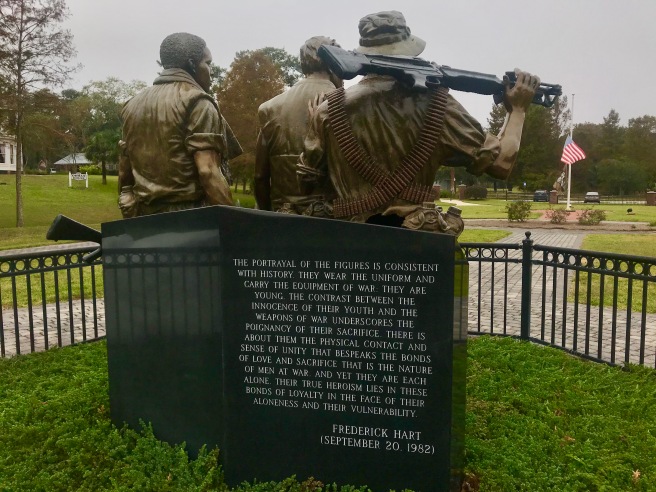 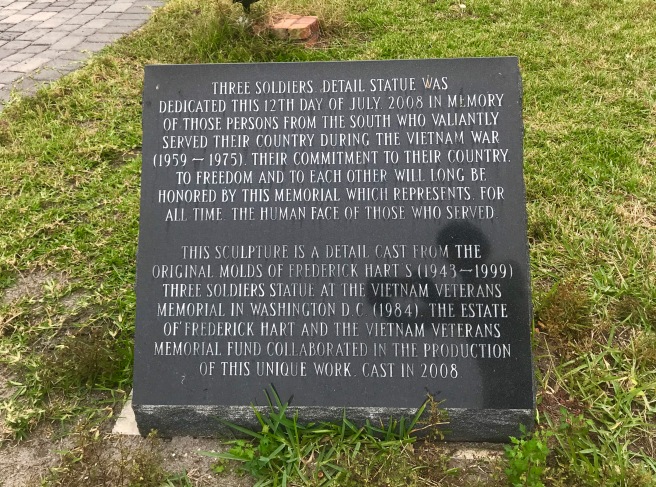 On my way to our motel, I passed this bike shop that is only open Saturdays. 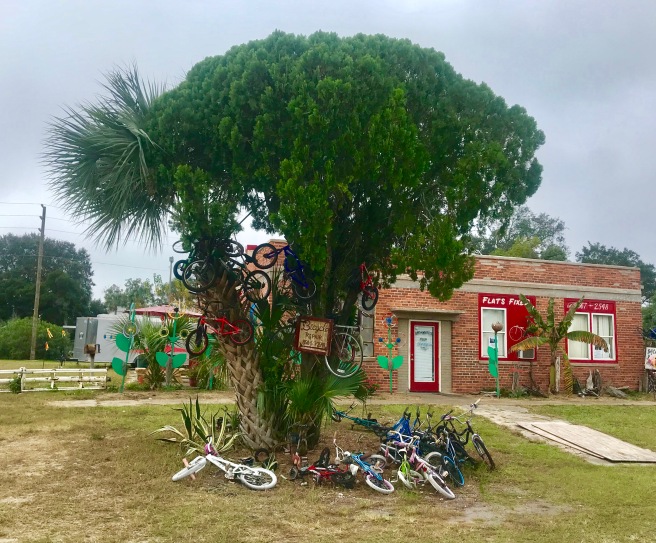 Our dinner at the Seafood Grill was delicious, but afterwards, Eric was looking for someone to try raw oysters with him at the oyster bar Tom C and Erwin went to before dinner.  I have never tried raw oysters, so I joined him. We agreed that we would order a dozen oysters baked in butter and Parmesan cheese, and ask that they give us 2 raw ones so we could try them out.

So we walked into the oyster bar and sat at the counter.  When we told the guy behind the bar what we wanted, he ascertained that we had never eaten raw oysters before and immediately started shucking 2 of them for us. 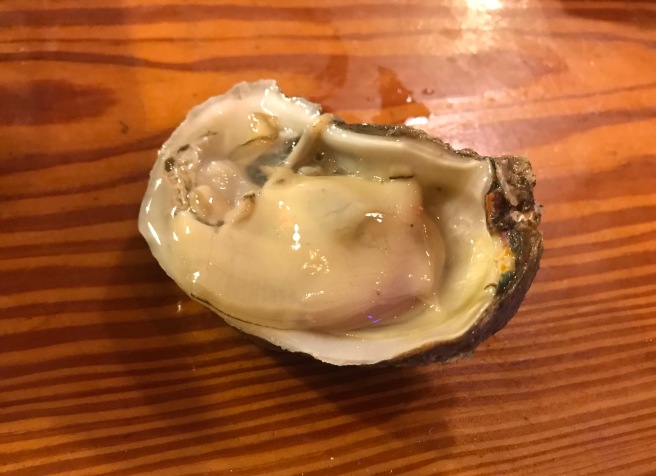 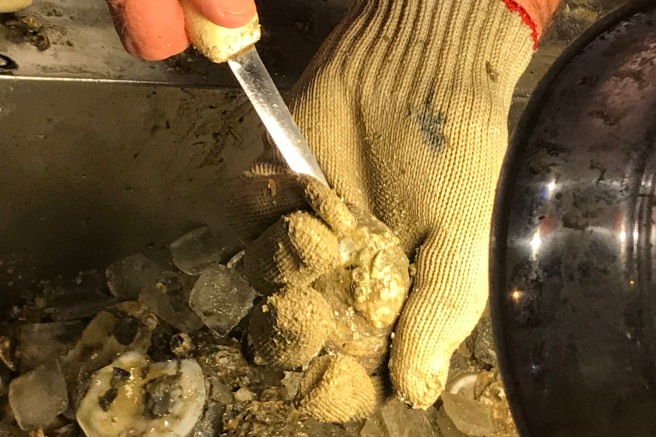 He and a couple of the customers proceeded to give us a lesson—well actually 3 different lessons—on how you eat a raw oyster. It was hilarious, but the moment of truth came when we had to down those oysters. 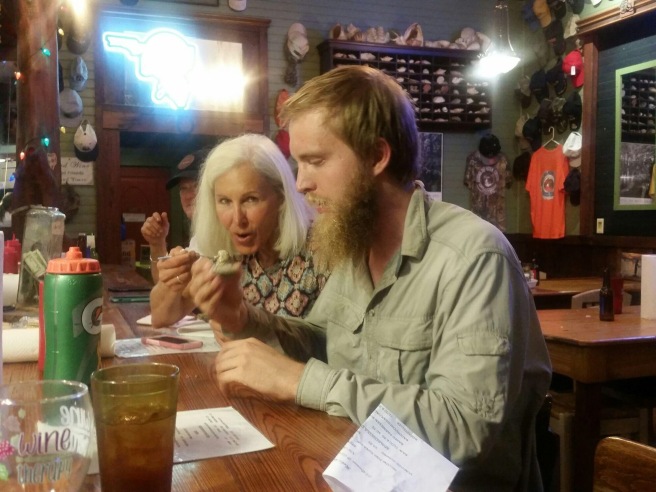 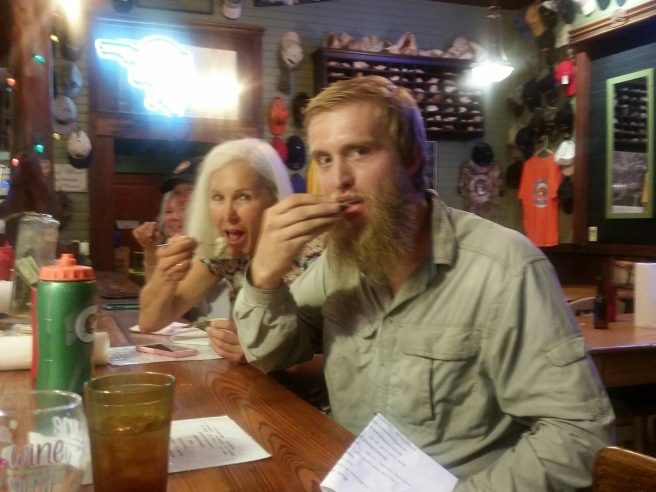 Sorry, you raw oyster lovers. I can’t fake it. I don’t like them raw. To you they may be a delicacy, but to me they are too salty, too slimey and just plain gross.  Once the guy behind the bar figured out that Eric thought they were okay, he shucked a few more for him, while we waited for our baked oysters.  And the staff and customers entertained us with their advice on how make the slimey little things edible so you can swallow them. 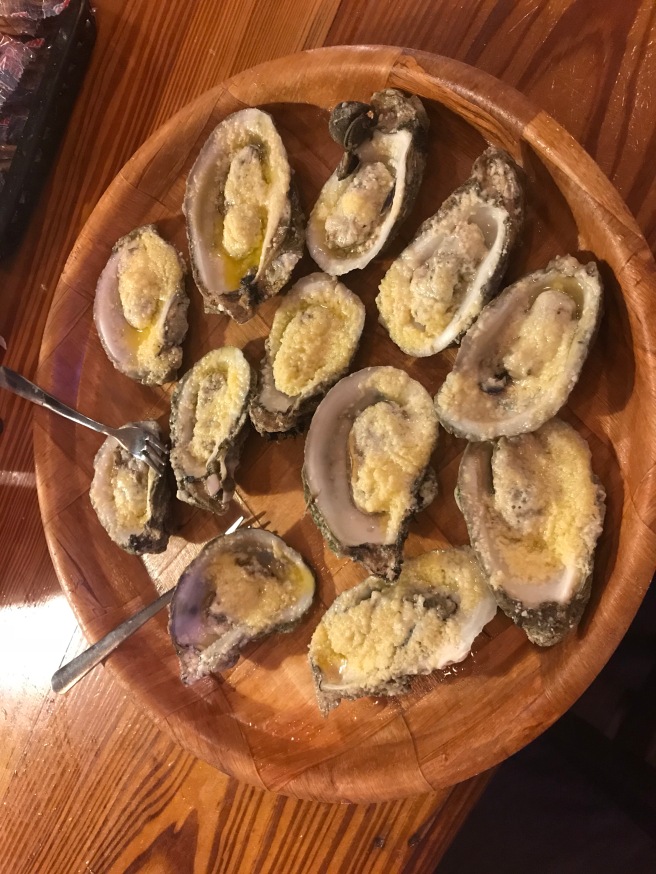 The baked oysters were delicious, but you can buy a lot of other tastey things for $14—like 4 pints of Ben & Jerry’s New York Super Fudge Chunk ice cream. 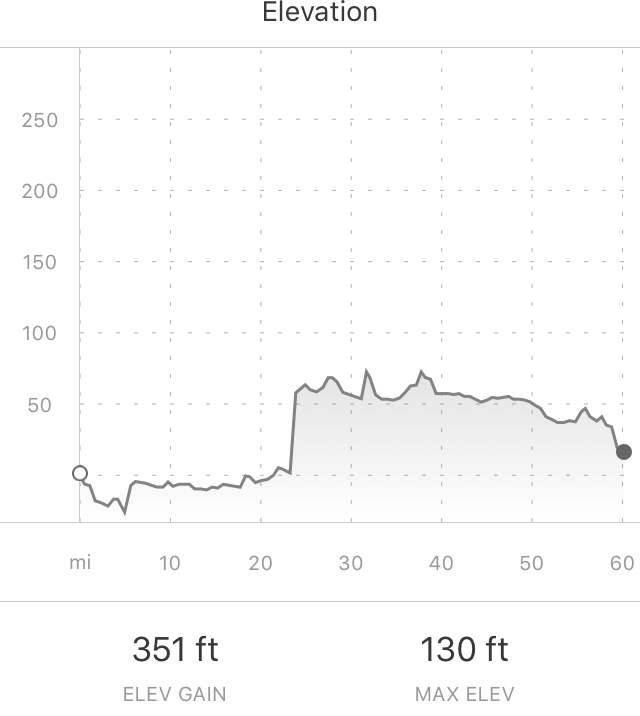