Can’t think of anything that stood out as special, today.  I was part of the duo responsible for laying out breakfast and lunch fixings, so I got out of camp a little late, and luckily ended up riding with Ed. We had a 42 mile ride ahead of us with 3 significant climbs indicated in Ken’s notes as being 6 and 7% grades.  No problem.

The three climbs surprised us, but only because they were so much steeper than we expected. The 8 to 11% grades were challenging, but at this point, we are pretty unstoppable. We dialed in our lowest gears, got in a rhythm, and  muscled our way through them.

Last night, we stayed at the Three Sisters RV Park and actually thought the place was owned by 3 sisters until today when we stopped for a snack at a big high end biker (motorcycle type) hangout.  The place was stocked with all kinds of “Twisted Sisters” merchandise with 3 hot babes on it, each babe labeled with her own Ranch Road. Turns out that one of the roads we have been following is part of one of the most popular Texas Hill Country motorcycle loops, Twisted Sisters, which is made up of Ranch Roads 335, 336 and 337.  Having seen  large groups of motorcyclists on the route, this totally made sense.

A sign up ahead on our route read, “Caution Next 12 Miles, Since Jan. 2006, 12 Killed in Motorcycle Related Crashes.” That got my attention. Ahead of the sign was a winding road with steep ascents and descents and a complete drop off on one side of the road. On one of those descents, there was a 20 mph sign, and believe me, I took heed and slowed down. 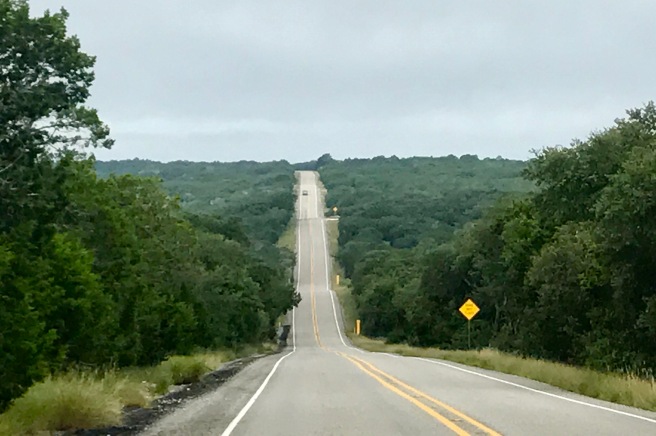 Some of the Texas Hill Country roads aren’t winding at all; they’re just plain Hilly.

A short while later, we stopped in Leakey, a little tourist and fishing town, to get the milk shake that last year’s ride leader mentioned in his notes. Unfortunately, we never found the described place, but instead, we found a cool barn/shop full of handcrafted  gifts. I was with 4 guys, at this point, and they all bought something, so I caved in to the peer pressure and bought myself some cheap earrings that are made from part of a bullet casing.  Just my style, eh?

We continued to look for that milk shake, and in doing so stumbled onto a place with a chicken fried steak lunch special that was to die for.  After eating the dessert that came with the lunch special, we were ready for a nap, but alas, that was not to be.  We had an appointment to meet the rest of the group at a grocery store up the road to help them haul food for dinner a few miles up to road to camp.

I forgot to mention that along the route, today, we ran into two couples of 65 year olds from Spokane who are riding the Southern Tier route together. Turns out they left San Diego the same day we did.  It didn’t take us long to figure out that we were kindred spirits.  We shared some of our adventures with each other and had a few laughs with them before pushing on.  When we arrived our evening destination, Loat Maples State Park, there they were again–camping next to us.