Those of you who have spent any time talking to me about this tour know that today and tomorrow are the toughest days on the ride.  I have been fretting about them and training very specifically  to survive them for months.  I have never ridden anything close to the 66 miles and 5200 feet of elevation gain to Tonto Basin or the 55 miles and 5100 feet of elevation gain to Globe, with or without the Arizona heat.  I had discussed my concerns with Ken, our ride leader, who told me that on two separate tours, last year, several of the riders had to hitch rides, as they could not complete the course.   So I had a good friend, Catherine Ries, on standby–ready to drive her pickup truck up to pick me, and anyone else who needed a ride, up and haul us up the road, just in case it was necessary.

The day started with our 71 year old rider, Terry, staying behind for the day.  His eyes have become progressively more painful and burning as he rode in the wind, which pretty much has been a factor every day so far, so he had arranged a ride to an ophthalmologist to have them checked out.  We were all sad to leave him behind, knowing it might be the last time we saw him, but at the same time, hoping we’d see him again up the road today.  Terry was an Olympic athlete, back in the day, and had great advice on everything fitness and cycling, plus his sense of humor lightened things up pretty routinely.  No comment about his cooking.

So we packed up our camp, loaded up with water, as there wouldn’t be any till we reached Jake’s Corner–50 miles out, said our goodbyes, and headed down the road toward Tonto Basin. 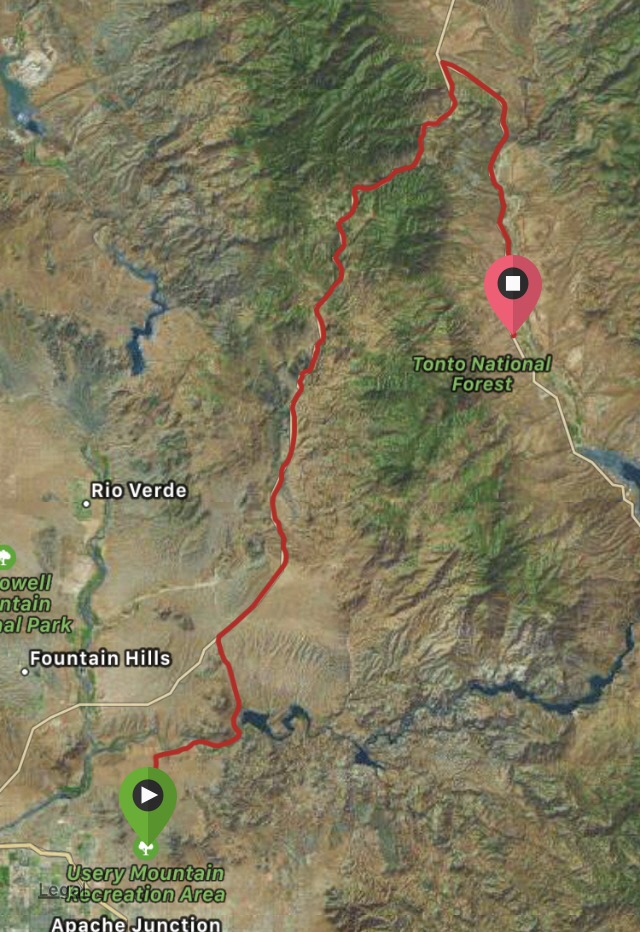 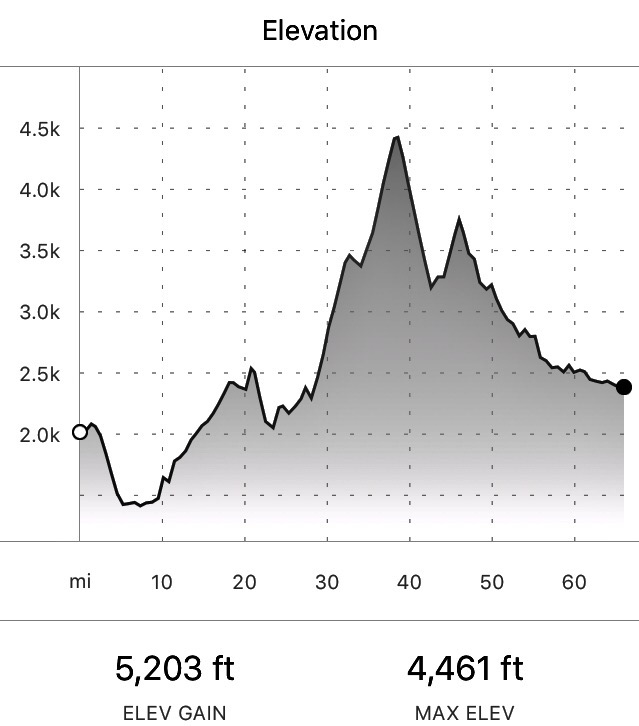 I threw the route statistics in early as reference.  The day started out with an awesome descent heading down Ellsworth Rd. toward the Salt River Recreation Area tubing operation, then the climbing began, as we rode eastward toward Saguaro Lake. 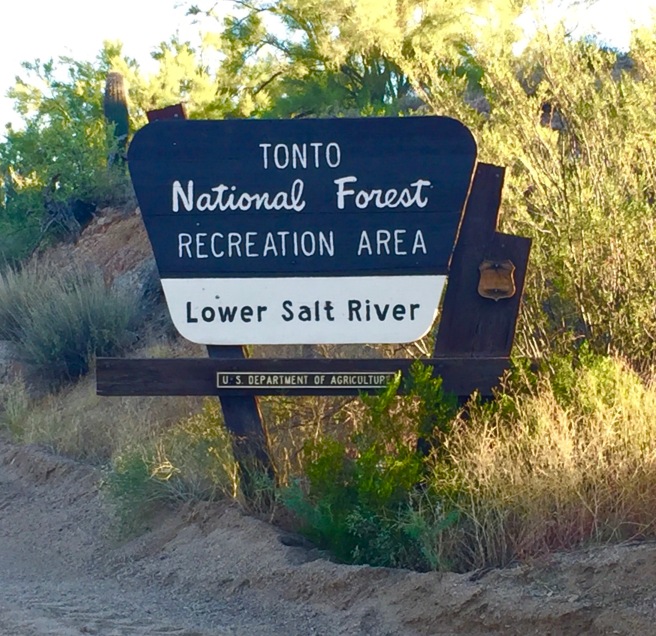 At the lake, we turned north, and things got tougher, but for the first time on the ride, we had a tailwind.  A tailwind, can you believe it?  At 10 AM, about the time the serious climbing kicked in, a very light scattering of clouds floated in–occasionally providing shade, and additionally, temperatures stayed unseasonably cool throughout the day.  Our riding conditions could not have been better.  The conditions continued through the  turn off toward Roosevelt Lake, at which point we started riding southward into the wind.  As the wind provided an assist up 7, 8 and 9% grades,  I thought to myself, over and over again, that God had heard my prayers and concerns and was blessing me.  I stand by that.

The scenery today was spectacular throughout the entire day.  Arizona has the most beautiful deserts in the world, hands down. 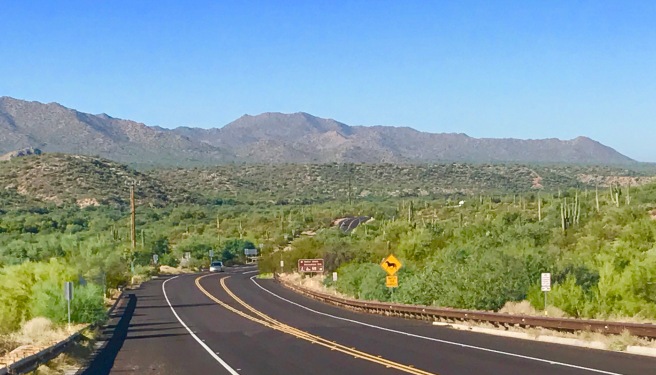 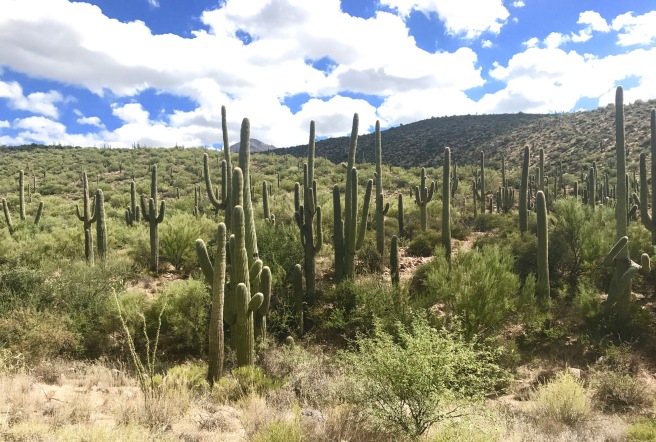 I’ll confess here that I had a hard time getting out of camp in the morning, so started out at the back of the pack.  But as I rode along, I was riding my ride–keeping my cadence steady and attempting to keep my heart rate under 140.  On the steep grades, that was impossible, but still I made a point of not pushing myself unnecessarily.   As I moved down the road, I caught up with 5 riders who I normally trail. 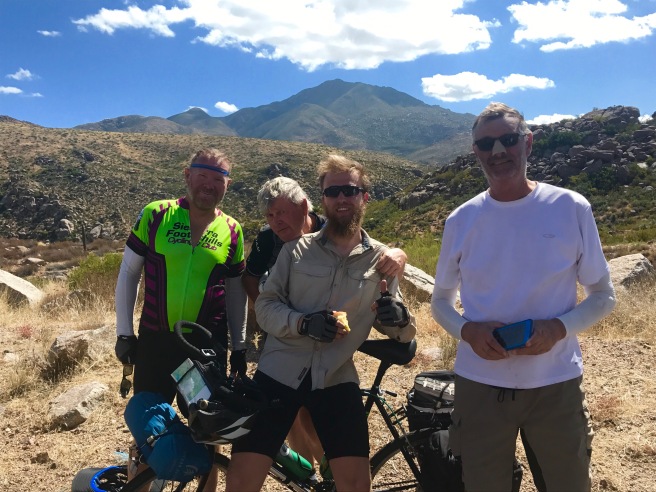 At one point, as I looked off to the right of the road, I could see below us some stock trailers and cattle moving out from under a highway crossing.  Erwin and I pulled off to watch the tail end of a cattle drive. 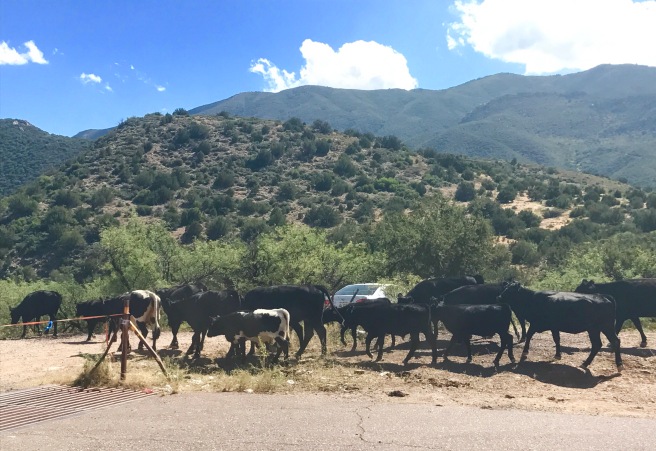 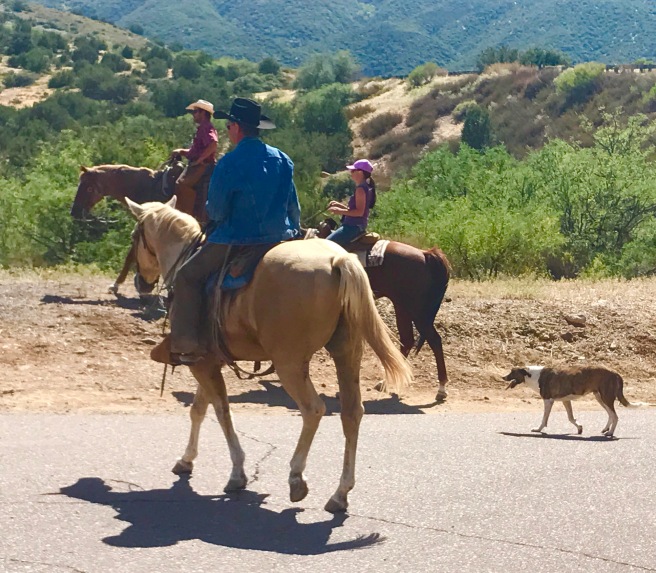 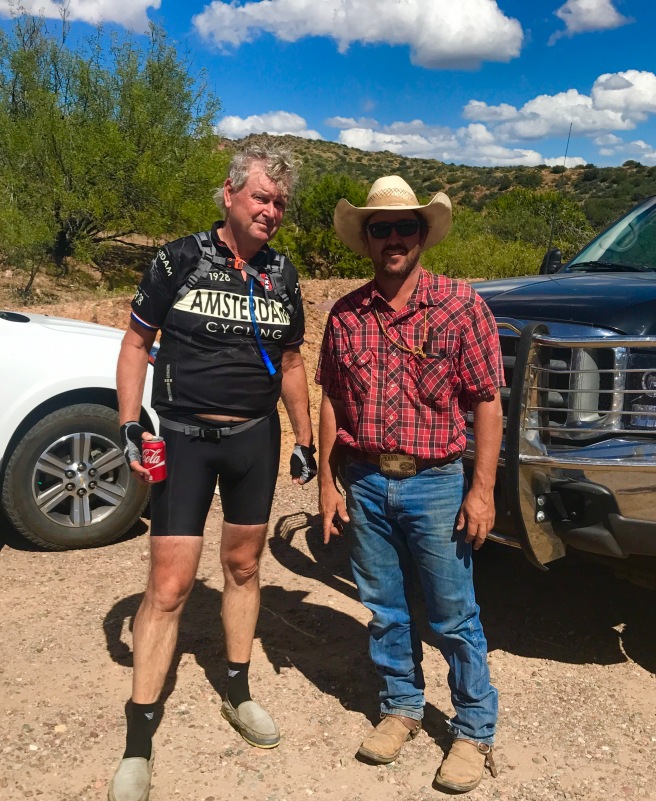 The rancher, a woman named Lori Brown, was the nicest lady.  She told us about the cattle drive, introduced us to the wranglers, and offered us cold beverages from a large cooler.  Being low on water and still having about 10 miles to go to get to Jakes Corner, we were pretty jazzed.  She pretty much made our day.

At the turnoff to Highway 188, the winds changed and got in front of us.  Three miles in, we reached our water stop and indulged. 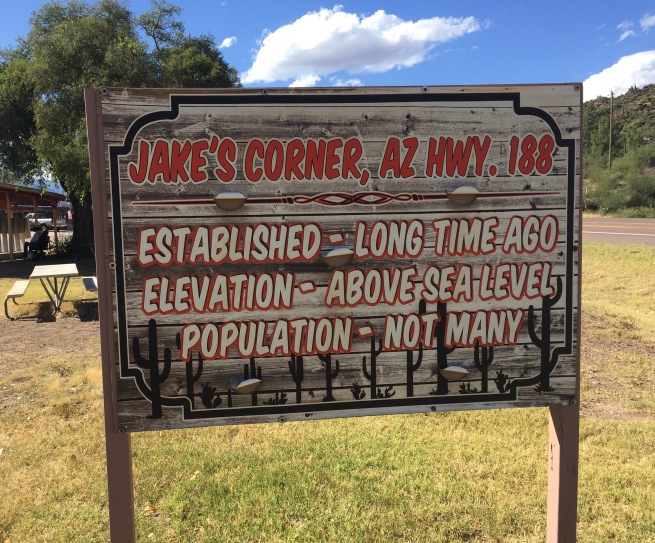 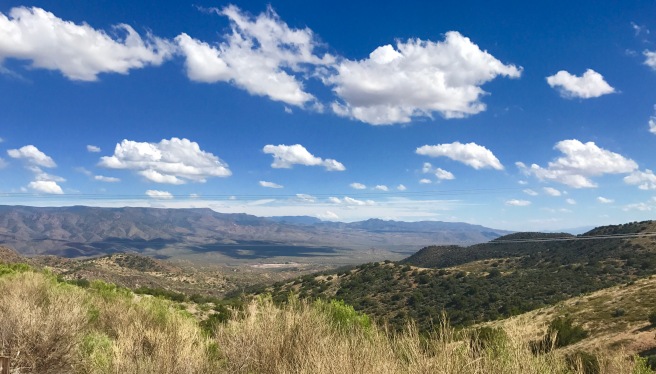 The remaining miles to the Tonto Basin Inn were a tough slog over rolling hills and into a headwind, but thankfully, they were all generally downhill. 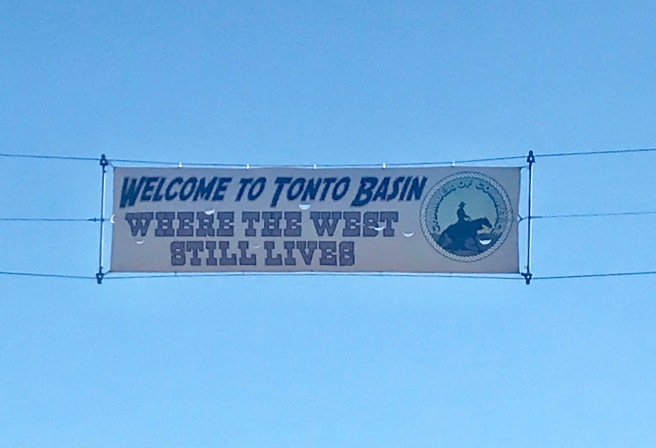 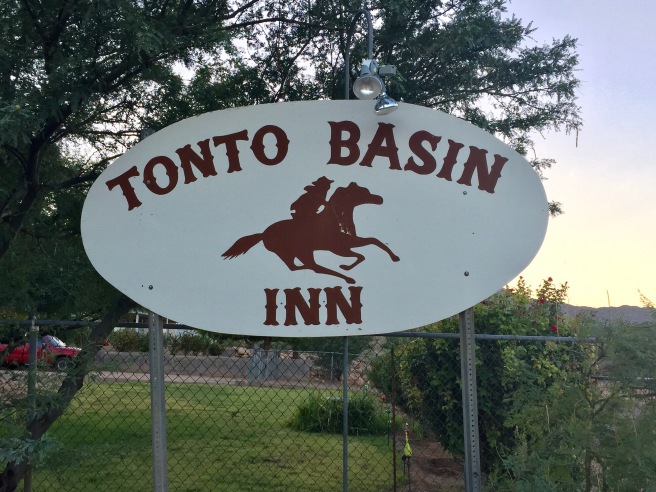 The entire group had arrived the inn by about 4:30 PM to hear the word on Terry.  The ophthalmologist determined that his eyes were sunburned and he was experiencing something similar to snow blindness.  He has to stay indoors and wear sunglasses during his waking hours for 10 days, so will be unable to continue the ride.  We’ll miss him.

Erwin and Eric had a kitchen and propane grill to cook dinner on, so they went to town with the dinner meal.  Hamburgers, hotdogs, grilled onions, potato salad, coleslaw, spinach salad with all the fixings, and banana splits.  Life is good.