It was a short day of riding, today, and the entire day was spent passing through the Arizona desert, 14 miles of which was on I-10 in heavy semi traffic.

That was 14 more miles of dodging shreds of steel belted radials and other debris.  If you’re not a cyclist, you may not be aware that the fine little wires in those shreds of tire are a major hazard to bike tires. And when they flatten a bike tire, they are so fine that it is almost impossible to find and remove them. If you don’t find the wire or other debris that is the source of a flat, and remove it from the tire, it will still be there to flatten the next tube you install.

I haven’t had any flats, yet, but one of the guys in our group has had one or more 0f them  each day.  He has been blaming his tires, which happen to be the most bombproof touring tires on the market. Today, he finally found one of those itty bitty wires in his tube and was able to track it down and remove it from the tire.  My guess is that he doesn’t put as much energy into dodging those tire shreds as I do.  Or maybe he’s just not lucky.

Our 38.9 route consisted of two long hills and passed through three small towns on the way to Salome.  All of the towns in this part of the state are like ghost towns in the summertime, but in the wintertime are packed with winter visitors.  Quartzite, where we stayed last night, Will have over 250,000 visitors in RVs rolling in in a couple more months. I can’t even imagine that many senior citizens in one place at one time.

The first town we ran into, Brenda, had what looked like a really nice local market, but it wasn’t open on Sunday, so we sat out on its shaded front porch and ate an early lunch at 10 AM.  Sounds crazy, I know, but we were hungry again–already.  After leaving Brenda, the wind picked up, and the climb to Hope was painfully slow.  Thankfully, Hope had an open market that was stocked with snacks and cold beverages.  We hung out under a shady overhang for a while, talking to others from our group who also stopped for a break and an occasional motorist on his or her way to the casinos in Nevada. 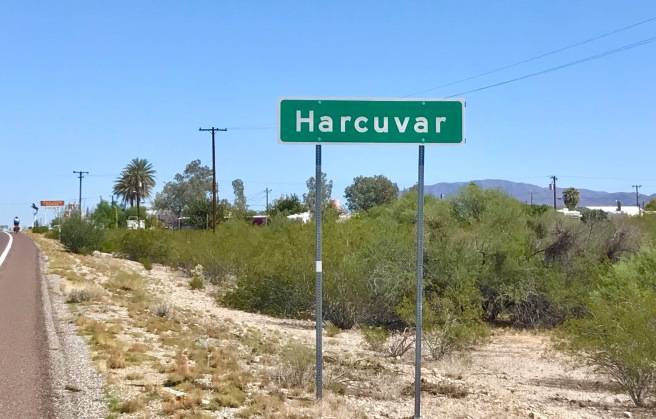 After another run of uphill cycling into a headwind, we passed through Harcuvar.  No joy there, as nothing in town was open for business, so we kept moving.

Salome is a relative metropolis, compared to all the other towns we passed through today. It even has its own Lion’s Club, monuments to unknown people, US Air Force mothballed missile display, and of course the high end motel we stayed in. 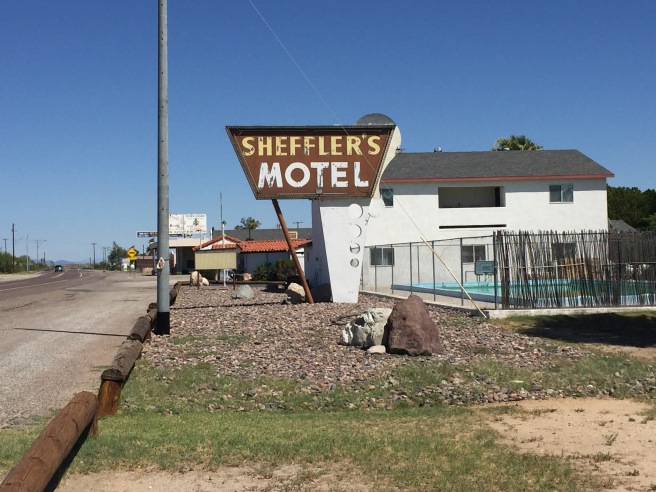 We arrived at our motel just before 1 PM, but some of the guys rolled in as early as 10 AM. Our rooms weren’t ready until past 2 PM, and the motel owner wasn’t back from church to give us keys till about then anyhow, so we hung out in the shade and waited.

After assessing the grocery situation in town, Ken decided that we would be getting another restaurant meal for dinner (the natives rejoiced), so we moseyed over to the only open eating establishment in town and were its only dinner customers. The chef had some mad skills that left all of us pretty happy.  For the record, half of us ate bacon burgers and the other half Mexican food, so we made it easy for her.

On a day like that, after a meal like that, there is only one thing left to do. We all turned in early, including me. 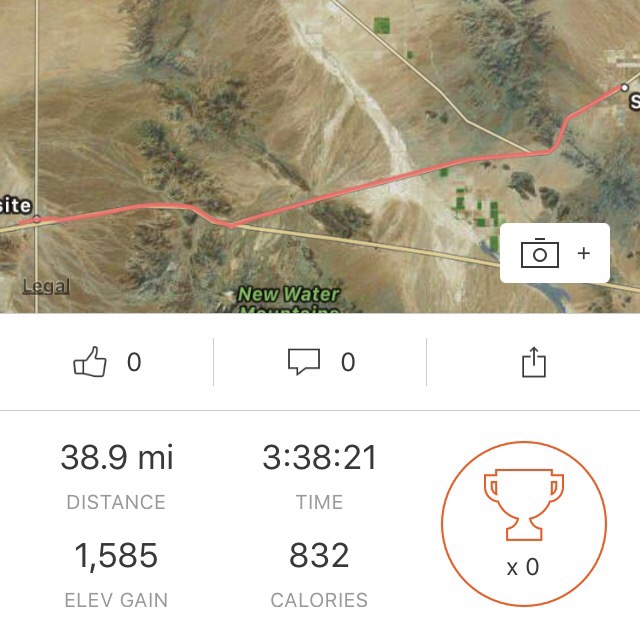